During the third week of March, the Executive Committee of the World Council of Churches, an ecumenical organization with a long history of demonizing Israel, will elect a new General Secretary to replace Rev. Dr. Olav Fykse Tveit, who recently announced that he will not run for a third term. Tveit, who was elected as Presiding Bishop of the Church of Norway, has served two five-year terms as president.

A WCC search committee has nominated two candidates to replace Tveit. One candidate, is Dr.  Elizabeth Joy who currently serves as director of Churches Together in England. She is a member of the Malankara Orthodox Syrian Church. She hails from India. There is little information available on the internet about her attitude regarding Israel. 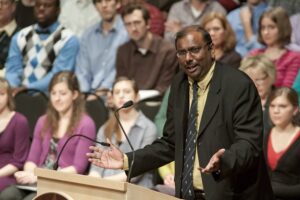 The second candidate is Dr. Jerry Pillay, Dean of the Faculty of Theology and Religion, University of Pretoria in South Africa. Pillay, a member of the Uniting Presbyterian Church in Southern Africa. Pillay previously served as president of the World Communion of Reformed Churches.

At the closing of his speech, Pillay declared, “For the sake of just peace we may have to support boycott, divestment and sanctions. We may have to go against those we do not wish to isolate but in the words of Luther we may need to say: ‘Here I stand, I can do no other! So help me, God.’”

Pillay’s willingness to appear at an event organized by the IPMN is particularly troubling. The IPMN has a well-earned reputation as promoting hostility toward Israel and diaspora Jews. In 2012, two years before Pillay spoke before the IPMN audience, the Jewish Council for Public Affairs issued a press release calling on the PCUSA to rein in the organization’s antisemitism. “We have been concerned by the transformation of the IPMN-PCUSA into a gathering place for anti-Jewish tirades,” said JCPA Chair Dr. Conrad Giles. The press release read in part as follows:

[A]t an opening program of the IPMN-PCUSA annual conference, the Rev. Craig Hunter said “greed and injustice is a cancer at the very core of Zionism.” In a 2010 letter to church delegates, the IPMN-PCUSA falsely accused the Jewish community of intimidating Presbyterians by sending a letter-bomb to the church’s headquarters and setting fire to a church. IPMN-PCUSA tweeted an article proclaiming “Jewish power + Jewish hubris = moral catastrophe of epic proportions.” IPMN-PCUSA also has supported virulently anti-Israel resolutions including those equating Israel with Apartheid and has been a vocal supporter of the anti-Israel boycott, divestment, and sanction movement.

The text of Pillay’s IPMN talk indicates he has drawn a straight line between the apartheid policies of South Africa and Israel while ignoring Palestinian behavior altogether. In his prepared remarks, Pillay focuses intently on Israeli policies, but offers little if any criticism of Palestinian rejectionism and incitement against Jews promoted by the Palestinian Authority and Hamas. Both the PA and Hamas are mentioned only once in passing in this speech, and the references are not critical.

In his talk, Pillay described the security barrier as a “wall that brings limited security to Israelis, but ultimately steals land, oppresses, and separates Israelis and Palestinians from each other.”

The fact is, the barrier brought about a drastic reduction to terror attacks from the West Bank, which were the true and original source of separation between Israelis and Palestinians. Pillay also spoke about the “humiliating” checkpoints, but said nothing about the suicide attacks that made them necessary, nor did he mention the incessant and relentless rocket attacks from the Gaza Strip that have made life very difficult for millions of Israelis. In sum, Pillay demonstrated himself as a supporter of Palestinian statehood without responsibilities. In his narrative, Israel is the only responsible party.

The election takes place several weeks after the International Jewish Committee on Interreligious Consultations (IJCIC) rebuked the WCC for supporting baseless accusations from Archbishop Attallah Hanna, the head of the Sebastia Diocese of the Greek Orthodox Church in Jerusalem. (In December 2019, Hanna falsely accused the Israeli government of trying to poison him.) IJCIC issued the rebuke after CAMERA exposed Hanna’s hostile comments about Israel in a piece published in the Times of Israel.

If Pillay is elected, it is reasonable to assume that the WCC, which is comprised of churches with many opposing theologies, will continue to use anti-Zionism as a unifying agenda, just as many Arab and Muslim leaders do in the Middle East.