CAMERA secured corrections from the Associated Press and Times of Israel after the news outlets described the Popular Front for the Liberation of Palestine, or PFLP, as merely a “leftist political party that has an armed wing.” 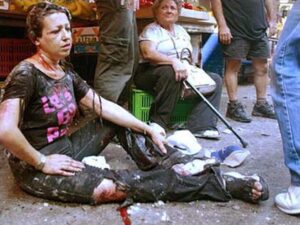 The Associated Press has documented PFLP terrorism, for example in this AP photo of the aftermath of a suicide bombing on Tel Aviv’s Carmel Market.

The PFLP is responsible for a spate of airline hijackings in the late 1960s and 1970s and, more recently, for deadly suicide bombings on Israeli markets and restaurants and the assassination of Israel’s tourism minister. PFLP’s 2002 attack on a pizzeria, for example, killed three Jewish teenagers. The Associated Press, of course, is aware of PFLP’s terrorism, having covered the group’s attacks.

After CAMERA’s communication with editors, the AP added a passage acknowledging that “Israel, the U.S. and the European Union consider it a terrorist group because of high-profile attacks going back decades, including plane hijackings and the assassination of an Israeli Cabinet minister in 2001.”

The Times of Israel, whose story was largely based on the earlier AP report, removed the description of the PFLP as a “leftist political party” and instead referred to the “Popular Front for the Liberation of Palestine terror group, which has a history of high-profile attacks going back decades, including plane hijackings and the assassination of an Israeli Cabinet minister in 2001.”

CAMERA commends both outlets for ensuring their stories include directly relevant information that ensures readers are fully informed.