For Israelis and Palestinians alike, few fields of research, scholarship or cultural interest are as politically charged as archaeology. Last month’s discovery of a 1500 years old Byzantine Christian baptismal font, which Israeli authorities found in the back yard of a West Bank village mayor, was no exception. With the assistance of Israeli troops, Israel officials returned the missing relic to its original location in the Tel Tekoa’ archaeological site. Israeli authorities, along with history enthusiasts, maintained that the whereabouts of the heavy stone item were unknown since its 2000 theft from Tel Tekoa’. 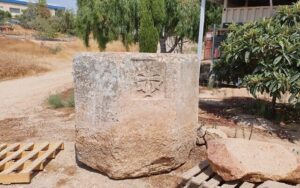 The baptismal font recovered by COGAT on July 20, 2020 (Photo by COGAT spokesperson’s office)

The Palestinian Authority, on the other hand, claimed that the font was recovered from the culprits as early as 2002, and then placed in the private yard of mayor and Fatah member Tayseer Abu Mafrah. Palestinian Authorities charged Israeli officials with stealing the item from Abu Mafrah’s yard. Interviewed by Fatah–affiliated Independent Arabia journalist Khaleel Moussa, Abu Mafrah insisted that the 18 year-long location was in fact a provisional fix aimed at protecting the precious item from being stolen once more before a proper village museum could be built.

Out of the many Arabic-language reports on the matter, perhaps the only one which cited Israeli sources along with Palestinian sources was found in the website of i24 News, a private television channel broadcasting in French, English and Arabic, with main offices located in Tel Aviv-Jaffa and Luxembourg. However, i24’s report originally said that the font was dated to approximately 500 BCE, instead of CE. Following communication with CAMERA, on Aug. 9 editors commendably corrected.