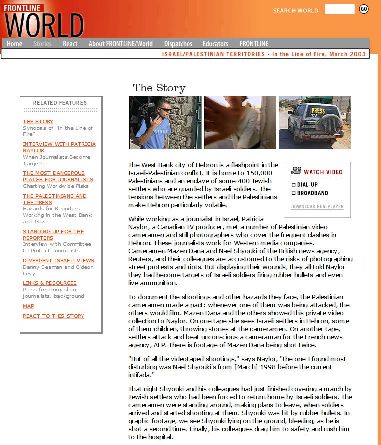 In March 2003, PBS broadcast “In the Line of Fire,” an updated and abridged version (20 minutes) of a CBC documentary aired in 2001 about journalists in the Israeli-Palestinian battle zone . Videotapes of the abridged version are available for sale from PBS for schools, libraries and other educational institutions.

Canadian film-maker Patricia Naylor focused her narrow lens on now-old allegations (most dating back to 1998 and the early months of the latest Palestinian intifada) by Palestinian journalists Mazen Dana, Nael Shyouki and others who claimed they were directly targeted by Israeli fire. She conducted interviews with the accusers, filmed them showing their wounds and describing in detail how they were allegedly targeted. Naylor also aired several film clips of shootings and harassment that were provided by the accusers, and provided the narration and voice-over throughout the film.

Palestinian journalist Nael Shyouki shows filmmaker Patricia Naylor where he was shot by Israeli soldiers who, he alleges, deliberately targeted him

The earlier version of the film — interspersed throughout with the same graphic film clip of a wounded Palestinian journalist shown in slow motion — was a study in subjective, one-sided reporting. The newer PBS version was cut by more than half but still shares many of the same problems as the original film — allegation presented as fact, lack of context for the shootings, and the use of selective quotes. In addition, omission of crucial information about the dangers both faced by and presented by foreign journalists operating in the region paints a lopsided case against the Israeli military.

First and foremost, Naylor treats as fact the allegation that Israeli soldiers deliberately target journalists even though the results of an internal investigation, released in a written report by the IDF, found neither evidence of premeditated or willful intent on the part of Israeli troops nor anything at all to suggest a pattern of shooting journalists. Naylor’s response? She states that despite repeated attempts to interview the Israeli army, they refused to be quoted for the film.

Missing from the picture is the context in which the journalists were injured — on a battleground where tense inexperienced soldiers are facing constant danger from armed, violent attackers throughout the West Bank and Gaza, where potentially lethal assaults occur on an almost hourly basis.

And there is no suggestion that journalists may not always be honest, objective, innocent victims of Israeli targeting. (Some caught in the line of fire have been shot while in the midst of rioting crowds and others have even participated in anti-Israel activities. In fact, an investigation into the circumstances of the April 30, 2003 bombing at a Tel Aviv pub revealed that an Italian journalist was an unwitting accomplice to the terrorists, giving them lifts in her car, including through Israeli checkpoints, where the Italian’s press credentials eased their passage. Even after the journalist realized she had travelled with the terrorists, she failed to inform Israeli authorities.)

Also unmentioned in the film are the steps put into place by the Israel Defense Forces (IDF) after the first months of the intifada (July 2001) to deal with the inherent vulnerability of reporters who place themselves in the line of fire, including closer coordination between the Foreign Press Association and the IDF, implementation of a mechanism for journalists to report incidents of injury by gunfire, and awareness training among soldiers and their ranking officers.

Naylor includes a brief clip of acting Government Press Office Director Daniel Seaman addressing representatives from Reporters Without Borders, the group that originally brought these complaints to the Israeli government. However, she omits the full text of his remarks which provide context. Naylor states only that Seaman concedes there is a problem, underscoring her statement with a selective airing of his remarks.

Another crucial aspect of the story not covered by Naylor is the journalists’ treatment at the hands of the Palestinian Autho—y—documented on CAMERA’s Web site: www.camera.org/Middle East Issues/Intimidation of Journalists—and its effect on journalistic integrity.

Limited to an amplification of the accusations against the Israeli military, the film thus sheds no new light on the important issue of journalists “in the line of fire” in a war zone. Ironically, the main accuser in Naylor’s film, Mazen Dana, was subsequently killed by American fire while covering events in Baghdad in August of 2003.