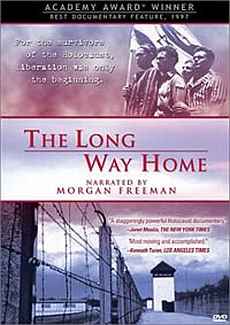 At a time when Israel’s legitimacy is increasingly challenged and overt anti-Semitism again menaces Jews, the Academy Award winning documentary, “The Long Way Home,” provides a powerful reminder of the heroic effort to re-establish the Jewish homeland in the wake of the European Holocaust.

The film highlights the personal accounts of several survivors, tying them into the larger narrative of events in postwar Europe and Palestine. It documents the unflagging efforts of others who helped them rebuild their lives in Palestine in the face of callous indifference by the international community. In one scene, a young woman who has barely survived the Nazi death camps, marvels at how rapidly the human body is able to recover from even the most severe deprivation. So too, in just three momentous years, did the surviving Jews lift themselves up from the depths of their horrific circumstances to rebuild a Jewish state in their historic homeland.

The documentary opens with a peaceful scene of contemporary Dachau, Germany. The scene then shifts back to 1945, as American troops enter Germany and confront the atrocities perpetrated there.

Immediately after Germany’s surrender, the uniquely tragic circumstances of the Jews are swallowed up in the confusion and chaos of post-war Europe. The surviving Jews are lost among the throng of 11 million displaced people living in squalor in makeshift camps and in the remaining barracks of the concentration camps. The survivors appear so emaciated and degraded that even among the liberating troops, empathy for them is mixed with disgust. A female survivor admits she feels shame and humiliation as she realizes how she looks.

The film starkly depicts the lonely, hollow existence of the survivors and unflinchingly exposes the still-burning hatred directed at the Jews by their gentile countrymen. It is shocking and unsettling to realize how little interest there was in helping the Jewish survivors of the concentration camps.

As the they linger in DP camps, one Jewish DP wonders whether “it is better to be a conquered German than a liberated Jew.” Another despairs, “The world stood still while we were burning. So much pain.” But worse is in store for the survivors who attempt to return to their homes in Europe. Their Gentile neighbors had ransacked and razed their homes looking for gold and are antagonistic toward those Jews who have returned. One survivor relates how a neighbor asked him “Why did the Germans leave you alive? Why didn’t they turn you into soap?” In Kielce, Poland, returning Jews are murdered in a pogrom.

There is not much more sympathy among some of the liberators. U.S. Army General George Patton expresses his contempt for displaced Jews whom he regards as “lower than animals.” The American ambassador tells two army chaplains sent to see if the survivors could be re-integrated into their former homes in Poland that “the damn Jews create problems all the time.” The Polish Prime Minister and the Communist Party chief are also indifferent to the fate of Jewish DP’s.

The film leaves no doubt that for the survivors there is only one answer — to leave Europe and find their way either to Palestine or America. Eight-year-old Yisrael Lau, later to become chief rabbi of Israel, poignantly recalls the last words of his older brother as he was taken away to the death camps, “If you should survive, there is a place in the world, Eretz Yisrael – repeat the name so you won’t forget it. This is the place where they don’t kill the Jews.”

But the Jewish DP’s trying to make it to Palestine are opposed at every point along the way by the British, who regard large-scale Jewish migration there as a threat to their interests. They face a thoroughly unsympathetic British administration under the leadership of Foreign Minister Ernest Bevin who berates visiting Jewish representatives with crude insults and makes no secret of his contempt for Jews. Bevin refuses to allow the Exodus, a ship carrying Jewish refugees from Europe, into Palestine and orders the ship to be turned back. Some of the film’s most moving scenes document the wrenching story of this ship which came to symbolize the inhumanity of British policy.

Steeled by their bitter experiences and a determination to reach Palestine, the survivors are not dissuaded. They make their way through hostile lands and bitterly cold mountain passes in an operation known as the Bricha (flight) and attempt to run the British blockade of Palestine. Few make it; most are forced into internment camps in Europe or Cyprus.

Eventually, facing national bankruptcy and unrest throughout the failing British empire, the British decide they have had enough and transfer the “problem” of Palestine to the United Nations. The Arabs, as Abba Eben relates, were so certain of their strategic advantage that they were not prepared to discuss any possibility of a Jewish state. Yet, against all expectations, the United Nations approves the partition of Palestine between Jews and Arabs.

Even after winning the UN vote to partition Palestine, however, the Jews faced an uphill battle. One interesting fact that is revealed is that as late as May 14, 1948, the Jewish leaders in Palestine were debating whether or not to declare a state, unsure whether or not it would be recognized. The center of diplomatic activity has now shifted to the United States, recognized as the new, dominant world actor. Former White House lawyer, Clark Clifford, relates how the State Department and Defense Department were firmly opposed to recognition of the Jewish state fearing it would upset relations with the Arab world that held important oil reserves. But President Truman was undeterred by the opposition of so many in his government, including his Secretary of State, George Marshall. On the morning of May 15, 1948, he decided to commit American support for the Jewish state. The film concludes with the words, “We won, we’re going on.”

The documentary’s recounting of the three most critical years in modern Jewish history is both compelling and inspirational.As American news correspondent, Ruth Gruber, realizes as she interviews one of the refugees on the Exodus, this surviving remnant of European Jewry withstood terrible hardship to reach Pales—e—not to salvage their own broken lives, but to ensure a future for their people. This story of renewal and modern Israel’s birth is one that needs retelling in a world where it often seems to have been forgotten.