After Infoequitable informed editors of the problems detailed here, AFP corrected its graphic to accurately depict the hundreds of Palestinian rockets launched at Israeli communities. See below for a detailed update.

Below is an AFP map, posted on Nov. 13, 2018, purporting to depict the rocket strikes that hit Israel and the Gaza Strip: 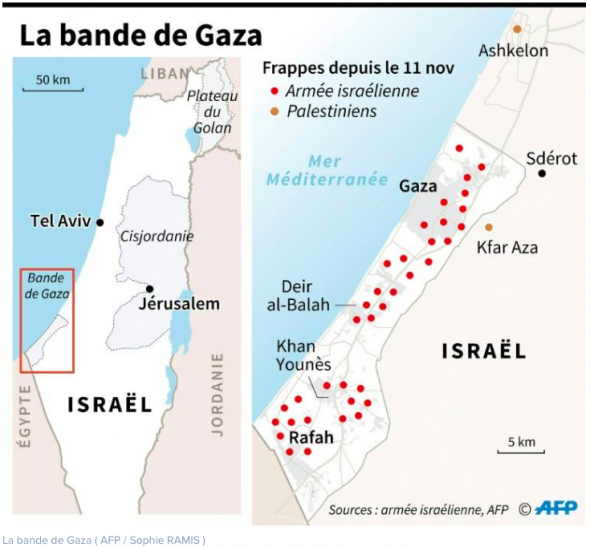 This infographic was produced by Sophie Ramis for AFP and was distributed in English, French, Spanish and Arabic. To fully understand the extent of the misinformation it conveys, here is a quote from the accompanying AFP article:

“Since Monday, the Israeli army recorded about 460 rocket and mortar shells [fired into Israel], of which a hundred were intercepted by its missile defense system, and said that, in turn, it struck back at 160 military positions of Hamas and its ally, Islamic Jihad.”

Yet according to the map, Israel was struck in just two locations but targeted the entire territory of the Gaza Strip (to the point that the map’s title refers only to the Gaza Strip).

One searches the map in vain to find a representation of the missiles that rained down upon the city of Sderot, for example, although this information is also found in the above-mentioned article with a photo captioned, “Israelis in the city of Sderot take shelter from rocket fire coming from the Gaza Strip on November 12, 2018 (AFP/Jack GUEZ)."

Where did those “460 rocket and mortar shells” launched by Gazan Islamist groups – not to mention a Russian Kornet anti-tank guided missile targeting an army bus – go? It is noteworthy that the missiles fired from Gaza primarily targeted Israeli civilians, while the Israeli army responded by firing at military targets in Gaza, and this distinction between civilian and military targets should be depicted in the infographic, as well.

Parenthetically, the contrast between “the Israeli army” vs. “Palestinians” in the infographic legend is misleading because the belligerent Palestinian groups, named in the article, are armed to the teeth, as they have just demonstrated.

A picture is said to be worth a thousand words. Even if the information is contained within the article itself, it is still imperative for the map that illustrates the text to appropriately reflect the reality on both sides of the conflict. InfoEquitable wrote to AFP requesting that it amend the infographic to include the full impact on the Israeli side of the violence from Gaza.

— A version of this article first appeared in French at InfoEquitable, a Paris-based organization that promotes accurate and professional coverage of Israel in the French media.

After Infoequitable contacted AFP editors regarding the graphic which erased hundreds of rocket attacks against Israeli civilians in southern Israel, the news agency published the following corrected graphic in English, French, Spanish and Arabic: 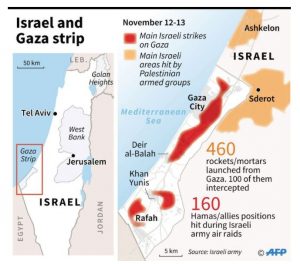 In addition, a note appended to the graphic in AFP's images archives makes clear:

Infoequitable and CAMERA commend AFP for correcting the graphic.