Following communication with CAMERA Arabic, U.S. public broadcaster AlHurra has corrected a Dec. 26, 2021 article which repeatedly referred to Israelis in the Golan Heights as “settlers.” 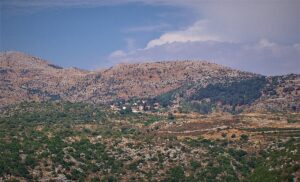 Originally entitled “Israeli government agrees on a plan to double the number of settlers in the Golan,” the accompanying article had referred to a “317 million dollar plan aimed at doubling the number of Jewish settlers in the Golan” and cited “7300 housing units for the settlers in the territory.” It also reported about the potential of “attracting up to 23 thousand additional Jewish settlers to the territory which Israel annexed in the 1967 war,” and continued, “About 25 thousand Jews are settled in the Golan Heights, alongside 23 thousand Druze who remained on their lands after Israeli takeover.” (Translations by CAMERA Arabic)

CAMERA brought to Alhurra’s attention the inconsistency between the article’s “settlers” terminology versus the official American position which recognizes the Golan Heights as Israeli. The article itself acknowledged the U.S. recognition of the Golan Heights as sovereign Israeli territory:

[After] Biden assumed his office last January, Secretary of State Anthony Blinken indicated that there are legal questions surrounding Trump’s move, however he confirmed that there is no thought of retracting the decision.

CAMERA also noted two additional inaccuracies in Alhurra’s reporting. Firstly, the date Israeli law was firstly applied to the Golan (“annexation”) is Dec. 14, 1981 and not June 1967 as the article suggests.

Second, the article misrepresented demographic composition of the Golan as consisting only of Jews who moved (“are settled”) there post-1967 and Druze descended from those who “remained” on the land in 1967. This mischaracterization overlooks some Israeli Druze who moved to the Golan after marrying into its local Druze population.

Part of Middle East Broadcasting Networks, Inc. (MBN), which in turn operates under a grant from United States Agency for Global Media, Alhurra is subject to USAGM’s Standards and Principles. These guidelines stipulate that output should be “consistent with the broad foreign policy objectives of the United States.” In other words, Alhurra’s language should reflect U.S. foreign policy decisions.

USAGM’s code of ethics states the following about accuracy:

Factual errors – whether on-air or in print – should be corrected as quickly as possible after their discovery. […] Errors of fact that do not significantly affect a story should nevertheless be corrected on the same program on which they were first broadcast – or on the same site as they were originally published — as soon as it is practical to do so. All errors should be brought to the attention of the President or the President’s designee.

Alhurra’s corrected version, published Feb. 8, 2022, commendably replaced all references to “settlers,” including both in the headline and the body of the article, with accurate accurate terminology citing “Israelis.” Editors also changed “1967 war” to “1981” and removed the inaccurate demographic description.

Additionally, the following Feb. 8 note alerting readers to the changes appears prominently at the top of the article: “This report was corrected due to a few inaccurate dates and terms appearing in its first published version.”