Earlier this month, Deutsche Welle fired seven employees following the completion of a two-month external investigation examining allegations of antisemitism within Germany’s public broadcaster. The investigation probed whether a number of employees were loyal to “DW’s clear commitment to Israel’s right to exist and a clear stance against antisemitism. This also applies to private profiles on social media,” explained the broadcaster.

As detailed in DW’s findings (German) and documented in English excerpts (here and here), the DW Arabic employees who were dismissed issued statements in support of ISIS, dismissed the Holocaust as a “fabrication,” and accused Jews of controlling art, media and music, among other clear violations of DW’s values.

Undeterred by the pile of evidence documenting support for terrorism and blatant antisemitism, a chorus emerged from a few usual suspects whitewashing the employees’ bigotry and support for terror as mere “criticism of Israel,” and seeking to undermine the entire probe. 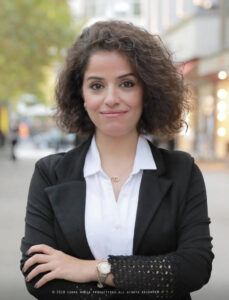 Among the dismissed employees was Palestinian-Jordanian journalist Farah Maraqa, who penned multiple columns in the online pan-Arab newspaper Rai al-Youm (where UK-based rabid antisemite Abdel Bari Atwan is editor-in-chief) lauding the killing of Israeli civilians. Maraqa claims she has not been properly notified about the reasons for her firing, and is challenging DW in court.

As previously reported in the Algemeiner, Maraqa wrote in December 2015:

I would announce that if the Islamic State were to fight for liberation in Palestine, I would revise my judgment about the group, its men and its financiers […] and if they throw the Israelis out of the Holy Land, then I will join their ranks.

According to the Alegemeiner, in a separate op-ed, Maraqa referred to Israel as “a cancer to be cut out,” employing common Arab nationalist rhetoric.

Concerning Gaza terrorists’ launching of rockets towards Tel Aviv, Maraqa wrote in July 2014: “The sound of the resistance’s rockets falling in the heart of Tel Aviv was once again music to our ears.”

Maraqa praised the November 2014 Har Nof synagogue attack in which killed a Palestinian terrorist slaughtered five worshippers and a police officer as an international media success:

We, as Palestinians of various citizenships and origins, must remember that true media efforts are being dedicated when two martyrs, like the ones who perpetrated the Jerusalem operation, are dedicating both of their souls to redeem that land, and when horror crawls into the settlers’ spirits. Then, the media has no other option but to speak about our [i.e. the Palestinian] cause, even if all the politicians have betrayed us.

The ululations which the sister of Uday al-Jamal has uttered during the broadcast, with breaths where joy was mixed with bitter sadness for his departure – these ululations, mixed with tears – this is my only [way of] expression – this is the only expression of Palestine and its cause – it is these tears and ululations which will bring down all the political theories and the peace processes – it is them which would never settle a secure homeland for the Palestinian as long as they [i.e. Israeli civilians, like the ones massacred in the synagogue] are in our land – the women, then, shall keep ululating in pain – and we shall keep singing “We Refuse to Die” hailing our martyrs in the sky –

Ululate, O woman of Jerusalem – and the [Palestinian] cause shall once again become “the foundation’ in spite of all the politicians!” (Emphasis added.)

On the killing of Samir Kuntar, the Lebanese terrorist guilty of the brutal murder of civilian Danny Haran and his two young daughters, including 4-year-old Einat, whose head he smashed on a rock, Maraqa opined in  December 2015: “To state my position, I feel sorry for Kuntar, nobody can deny him of his Jihad against the Israelis and his 30 years of captivity.”

On the January 2016 Dizengoff Street terror attack in which three civilians were murdered, Maraqa said of the terrorist: “I certainly would not have any criticism towards Nashat Melhem and what he has done, as I feel I am too small to write a single letter against this hero.”

On Ahmad Daqamseh’s release from prison, Maraqa celebrated the Jordanian soldier for his 1997 slaughter of seven Israeli eighth grade girls in March 2017:

Jordanians are happy, and by all standards they are entitled to be. The conversation here is not only about revenge and the killing of Israeli women, which it is established in the Jordanians’ belief that they are an “enemy.” Rather, it is also because there is someone among them who bore the consequence of his “deed,” even if it was a murder and required him to pay 20 years of his life, he is indeed a man capable of paying the price for his deed in its entirety.

Even after moving to Berlin from Amman about four years ago, Maraqa remained unrepentant about her past glorifications of terror. To the contrary, following her initial suspension in December 2021, she decried any attempt to hold her accountable for them:

First, allow me to restate, digging into my old articles (more than seven years old), taking sentences out of their historical, geographical and content context, and using them to defame me and assassinate my character is not acceptable. I refuse to “defend myself” here, as I have nothing to defend but professional journalism.

All too often, journalists whitewash rejection of the Jewish state’s right to exist and miscast glorification of terrorism as “criticism of Israel.” Deutsche Welle’s recognition of the bigotry and incitement as just that is noteworthy and commendable.