In a striking display of a lack of self-awareness, Agence France Presse last week reported on “Palestinian journalists” and a “rights group” who “raised the alarm over what they describe as unjust suppression of their content on Facebook,” protesting the media giant’s alleged lack of transparency (“Palestinians raise alarm over Facebook content ‘suppression,” Dec. 31).

AFP itself demonstrated a total lack of transparency. The news agency carefully withheld from readers the fact that deleted and censored Facebook (also known as Meta) accounts of Palestinian “journalists” and “rights” groups in question are awash with posts of incitement that glorify the killing of Israeli civilians. AFP conspicuously failed to provide verifiable specific examples, uncritically relaying the unsubstantiated accusations of the Palestinian organizations which themselves peddle in incitement.

Palestinian reporters have cited multiple incidents they describe as censorship.

One popular online news outlet, Maydan Quds News, may even have to fire reporters after its main Facebook page with 1.2 million followers was deleted, a source who requested anonymity told AFP.

Strikingly, the news agency failed to cite a single case of objectionable content from Maydan. 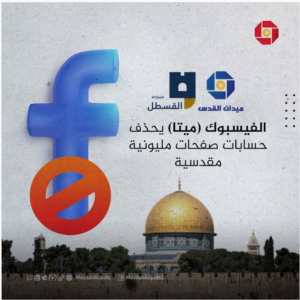 Kay, a 26-year-old South African immigrant living in central Israel, was on his way to work in Jerusalem’s Jewish Quarter when Abu Shkhaydam fatally shot him in the head and wounded four others, two seriously. While the Maydan Facebook posts in praise of the lethal terror attack are no longer available, its numerous Twitter, YouTube and Instagram posts glorifying Abu Shkaydam are extant. 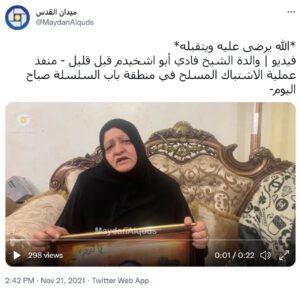 “*May Allah be pleased with him and accept him,*” reads Al Maydan’s Nov. 21 Twitter post, referring to Eli Kay’s murderer. “Video | Mother of Sheikh Fadi Abu-Shkheidem a short while ago – the perpetrator of the armed engagement operation in the Chain Gate area this morning.“ (Translation by CAMERA Arabic) 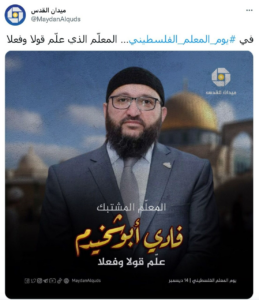 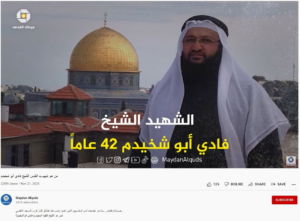 Maydan also uncritically reposted video of a boy who declared that Kay’s murderer “was a good man … didn’t curse anyone, except the Jews, may Allah burn them.”

The young student of the #Hamas terrorist, who murdered tour guide Eliyahu Kaye in Jerusalem this morning, mourns his beloved teacher, “He was a good man. He never cursed anyone except the Jews, may Allah burn them.” #Palestinians #HamasTerrorists
H/t and translation @MoranT555 https://t.co/gIvo2p56FV pic.twitter.com/UVa3q5fhCX 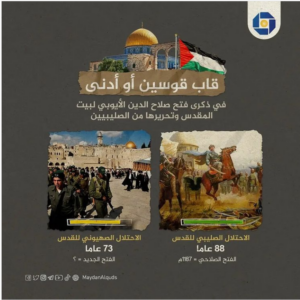 Far from an anomaly, Maydan’s praise for Kay’s murderer was typical of its extremism, with antisemitic rhetoric and ideology consistent with the Hamas terror organization. For example, its Oct. 2, 2021 Instagram post proclaimed (screenshot at left) that the destruction of Israel is “around the corner,” equating the Jewish state’s lifespan with that of the Crusader Kingdom. Another post published by the “popular online news outlet” demonizes a Bahraini visiting the Western Wall, alleging he “advocates for the Jews,” and therefore commits “treason” (Oct. 7, 2021).

Iyad al-Rifai of Sada Social, the “media expert” who complained about Facebook’s lack of transparency, represents one of two outfits in the region leading the campaign against Facebook’s suppression of incitement glorifying terrorism. As CAMERA Arabic previously noted:

… “7amleh” and “Sada Social” are devoted whitewashers of hateful and violent content, originally posted on social media by accounts they falsely portray as “persecuted.” Sada Social itself even labeled several murderers of civilians as “martyrs”, including notorious Yahya Ayyash, who is responsible for the deaths of many dozens of Israeli civilians between 1993-1996.

It’s no wonder then that al-Rifai carefully conceals that his organization campaigns on behalf of those who praise the killers of civilians. AFP embraced his whitewash, reporting that al-Rifai said Facebook

appeared to target the word ‘shahid’, Arabic for martyr, which Palestinians frequently use to describe people killed by Israeli forces, including those who carried out attacks.

Rifai told AFP that Facebook insisted it is bound by American standards which consider ‘attackers to be terrorists’, not martyrs to a political cause.

But he said censoring the term wholesale ignored the wider context of the Israeli-Palestinian conflict.

AFP failed to clarify that the attacks includes those that specifically target civilians. Moreover, the news agency neglected to point out that censored posts, such as those about Maydan cited above, frequently glorify the “martyrs” as heroes and role models to be emulated.

Allegations of pro-Israeli bias at Facebook have simmered for years and were renewed in October when Human Rights Watch, a vocal Israel critic, said the platform had “suppressed content posted by Palestinians and their supporters speaking out about human rights issues in Israel and Palestine“.

But as previously reported at CAMERA UK, HRW’s findings on the supposed suppression of Palestinian political content relies heavily on allegations from the very same two organizations seeking to whitewash and safeguard the dissemination of murderous incitement via Facebook: 7amleh and Sada Social.

On the other side, AFP reported that Meta

But by failing to provide examples similar to any of the actual content detailed above, AFP diminished the issue into an unresolved he said/she said argument, even as it more heavily favored the “Palestinian content is being suppressed” side.

“Silencing the voice” is a heading within AFP’s article, echoing advocates’ efforts to spin Meta’s crackdown on antisemitic incitement glorifying the killing of civilians into a free speech issue.

With research and translations by CAMERA Arabic. For the French version of this post, please see InfoEquitable.

French media monitoring site InfoEquitable, which works closely with CAMERA, has revealed that the author of the AFP article is Hiba Aslan, a Palestinian journalist at AFP’s Jerusalem bureau with a troubling history of antisemitic social media posts of her own. InfoEquitable’s statement follows:

Hiba Aslan is no stranger to the issue of inciting Facebook posts by Palestinian activists. In  response to a 2019 exposé by InfoEquitable in the wake of a severely tendentious AFP piece she wrote (and which the news agency was compelled to amend), Aslan expunged her own Facebook page of grotesque antisemitic and anti-Israel content. 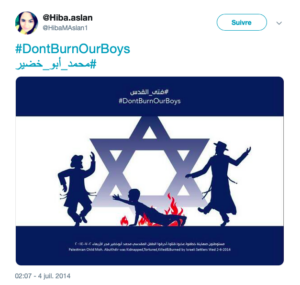 InfoEquitable had revealed that the latter was peddling biased drawings, accusing Israel of kidnapping Palestinian civilians, and that the journalist systematically referred to Israel and its army as “the occupation.” Her Twitter account was even more damning, with, for example, a cartoon of Orthodox Jews performing a ritual dance around a dying Palestinian child.
Her tweets also included a call for a boycott of “Israeli or Zionist-supporting” businesses. When asked why a particular company was listed, she replied, “I don’t know, that’s what’s on the list, but maybe the company is owned by a Jewish person. Google it : )”
In short, when it comes to incitement, the journalist who works for AFP is perfectly qualified. But to expect transparency from her is probably somewhat illusory. One might have hoped, however, that the news agency that employs her would hold itself to a higher standard.