As your children or grandchildren head off to summer camp, do you know what they will be learning there about Israel?

The anti-Israel group IfNotNow is planning to attempt to infiltrate Jewish summer camps to teach campers “about the occupation.” The group has held two training sessions, one in person and one online, for counselors, in which they suggest, among other things, that camp counselors “practice with them [i.e.,12 to 15 year old campers] saying the Kaddish every morning for Palestinians who have been killed in Gaza or its environs.” Of course, many of those killed in Gaza were Hamas members who, prior to their demise, were bent on destroying Israel. Other strategies for other age groups – as young as six – were discussed.

Although the Ramah camps have made it clear that IfNotNow’s anti-Israel agenda is not welcome, the group still plans to attempt to surreptitiously indoctrinate Ramah campers without the consent of the camp administrations. Moreover, participants in IfNotNow’s training may also be targeting Young Judea camps, the Union of Reform Judaism camps, and Hashomer Hatzair, Habonim Dror, and Bnei Akiva camps.

IfNotNow is a relatively new anti-Israel organization, marketed towards Jewish young adults. The group is reported to have about 1700 members, and it has 14 chapters or “hives” around the country. The group’s website states, “the time has come to end our community’s support for the occupation. We will be the generation to do it. The occupation is a daily nightmare for those who live under it and a moral disaster for those who support and administer it. IfNotNow is working to transform the American Jewish community’s support for occupation into a call for freedom and dignity for all.”

IfNotNow does not talk about peace, or about ending the violence directed towards Israel by Palestinians and their Arab allies. Israel has in the past pursued repeated efforts to end its presence in the West Bank (Judea and Samaria), including in 2000 and 2001 at Camp David and Taba under Prime Minister Ehud Barak, as well as in 2008 under Prime Minister Ehud Olmert. Former Palestinian Authority President Arafat responded with a terror war and Palestinian Authority President Abbas responded with rejection. Abbas continues to refuse to recognize a Jewish state. Israel’s unilateral withdrawal from Gaza was followed by the rise of Hamas and its seizure of the territory. Yet, IfNotNow ignores these facts, and ignores the attacks and wars that lead to Israeli administration over the West Bank to begin with. They speak only of ending Israel’s “occupation” in a vacuum. (A recent Facebook post declared naively, “if Israel is embarrassed by the Occupation, it can always simply end the Occupation.”)

The group has garnered attention by staging a protest inside the AIPAC policy conference in 2017 as well as with a one-sided article in Teen Vogue. In April of this year, when the riots at the Israel/Gaza border began, the group organized a Kaddish for those that were killed, despite the fact that most of them were members of Hamas or Palestinian Islamic Jihad. (For more information on the group’s anti-Israel activity, see Professor Miriam Elman’s detailed post on the Legal Insurrection blog.)

As is the case with much of the media bias that CAMERA discusses, IfNotNow’s activism suffers from a complete lack of context. IfNotNow’s claims that, for example, “both peoples are caught in a cycle of violence,” or that it is solely within Israel’s power to “end the occupation,” are based on a misreading of history. Its demonstrations, in which members shout, “If am not for myself, who will be for me? If I am only for myself, what am I?” or recite Kaddish, are largely fact-free.

IfNotNow’s ahistorical approach can be seen in this flyer that members of the group handed out earlier this week to Taglit Birthright participants at New York’s JFK airport: 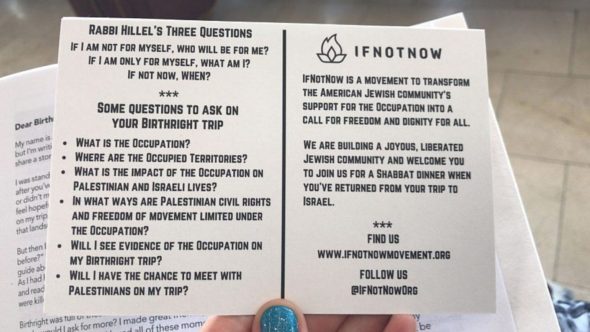 Some important questions that were omitted: How did “the occupation” start? What has Israel done to try to resolve it? Why does it continue? Those are the questions IfNotNow doesn’t seem to be interested in.

The group also makes clear that, “we do not take a unified stance on BDS, Zionism or the question of statehood.” In other words, they don’t even pretend to be Zionist, or to support the right of Israel to exist as a Jewish state, and they don’t oppose BDS (the movement to boycott, divest from, and sanction Israel).

As is exemplified in the group’s name, IfNotNow relies on Jewish traditions and symbols, but twists them to oppose Israel’s right to self-defense. The group claims its name is “inspired by Hillel’s three questions” and its logo is “inspired by the burning bush.” Yet, the group’s actions undermine the Jewish state’s right to defend itself from attack, and it even sympathizes with terrorists who are sworn to destroy Israel.

On May 27, over Memorial Day weekend, the group held a “training” for counselors at Jewish summer camps. The participants included counselors from Reform, Conservative, and liberal Zionist camps. While only about a dozen counselors participated in the in-person training, approximately another 50-60 reportedly joined a follow-up webinar. If they meet with any success this year, we can expect that number to grow next year.

A report in the Jewish Press from someone who participated in part of the online workshop stated that it included “young people from the summer camps of the Reform movement, Hashomer Hatzair, Habonim Dror, Young Judea, and even a graduate of Bnei Akiva in the UK … . They all explained why they wanted to instill in their campers an awareness of the ‘occupation.’” This article also stated that one suggestion made during the training was to “practice with them [i.e., 12 to 15 year old campers] saying the Kaddish every morning for Palestinians who have been killed in Gaza or its environs.” As noted above, this is essentially saying Kaddish for terrorists who died while trying to kill or harm Israelis. While some Palestinians who have died in the fighting are innocent, there does not appear to be any attempt made to distinguish the innocent from the terrorists.

Ramah Camps have made clear that they won’t incorporate IfNotNow’s program into their curriculum. It’s unclear, however, whether an individual counselor will be able to undermine Ramah’s approved curriculum. IfNotNow has reportedly indicated that its intention is to do so. As was pointed out in the Legal Insurrection blog, some of this may be occurring without the camp administration’s knowledge. In addition, IfNotNow has also said that it intends to target other camps outside the Ramah system, such as Young Judea and Union for Reform Judaism camps.

This is an insidious attempt to indoctrinate Jewish youth, at a time when they are away from home, and in many cases can’t even reach their parents by phone. Will responsible camp staff take the necessary steps to prevent this? That remains to be seen.