Who could have anything bad to say about an organization with so lofty a title as the United Nations Human Rights Council?

“Conservatives.” Or so says the New York Times in its June 20 story about the United States withdrawal from the council. “Conservatives have been complaining about the council since its inception in 2006,” Times correspondent Gardiner Harris asserts, before underscoring the purportedly ideological nature of the complaints by pointing to criticism by Nikki Haley and Mike Pompeo, both senior members of the Trump administration, and Elliott Abrams, who Harris points out is “a former Republican diplomat.”

Former President George W. Bush (Republican) and Israeli prime minister Benjamin Netanyahu (Likud) are also named as critics of the council. And that’s it. No other critics are quoted.

And what do these conservatives say about the UN body? There’s “bias against Israel,” said Abrams. There’s a “disproportionate focus” on the Jewish state, said Haley. It’s a “slanted body,” Netanyahu wrote on Twitter. And the administration as a whole, we learn, agrees: “The Trump administration has made clear that it will not countenance the level of criticism and what it describes as slanted resolutions by the Human Rights Council that have historically been directed at the United States and Israel,” the newspaper reports. Even the piece’s title is on message: “Trump Administration Leaves U.N. Human Rights Council.” It’s not the U.S. that is pulling out. It is Trump.

Clearly, the New York Times is intent on framing concerns about anti-Israel bias as a conservative position. And it is equally clear, at least to those who have followed the controversies that have plagued the council since its inception, that the newspaper isn’t telling readers the whole story, but rather a partial one. Which means, to borrow a word the newspaper likes to use in touting its high journalistic standards, not an impartial one. 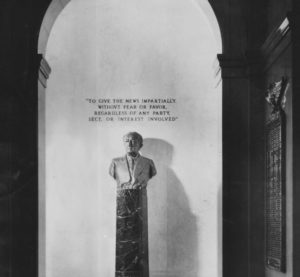 As a result, readers are left uninformed, an audience to reportorial sleight of hand that conceals longstanding criticism of the council by the Democrats, Obama administration officials, and even multiple United Nations secretaries-general.

“The council has focused its condemnation almost exclusively on Israel.” Those aren’t the words of a conservative politician. They come from a New York Times news report back in 2007.

In his article, titled “Dismay Over New U.N. Human Rights Council,” veteran reporter Warren Hoge quoted UN Secretary General Ban Ki-moon saying he is “worried by its disproportionate focus on violations by Israel.” The council, Ban said, “has clearly not justified all the hopes that so many of us placed on it.”

A few months later, Ban issued a statement reiterating his concerns: “The Secretary-General is disappointed at the Council’s decision to single out only one specific regional item given the range and scope of allegations of human rights violations throughout the world,” a reference to the Council’s Agenda Item 7 that singles out Israel.

Kofi Annan, who preceded Ban as Secretary General, also expressed disappointment in the Human Rights Council. “I am worried by its disproportionate focus on violations by Israel,” he said in 2006.

On this point, American politicians have agreed with the United Nations leaders. Progressive Senator Jeff Merkley said last year that the HRC “includes countries with appalling human rights records, determined to shield some of the world’s worst human rights abusers from scrutiny.” Meanwhile, he continued, its “excessive and disproportionate focus on Israel is shameful and inexcusable and cheapens the body.”

Democratic Senator Bill Nelson has likewise slammed what he described as “a council that is supposedly devoted to promoting human rights”:

The record shows it has failed to take any action on grave crises such as the Sudan; has failed to renew the mandates of the special reporters for Cuba and Belarus; and has regularly passed Belarus; and has regularly passed one-sided resolutions singling out Israel, 11 such measures criticizing Israel to date. And what about North Korea? What about Burma?

U.S. Representative Nita Lowey, also a Democrat, has described the Human Rights Council’s anti-Israel Agenda Item 7 as “something I have been complaining about as long as I have been [on the House Subcommittee on State, Foreign Operations, and Related Programs].”

To underscore her point, Lowey quoted President Obama’s Ambassador to the Human Rights Council, Eileen Chamberlain Donahoe, who before the Council itself said,

The human rights record of all states must be addressed under a robust common rubric. As such, the United States continues to be deeply troubled by this Council’s biased and disproportionate focus on Israel, as exemplified by this standing agenda item. As we have said in the past, the Human Rights Council must treat all countries by the same standards. The effectiveness and legitimacy of this Council can never be complete as long as one country is unfairly and uniquely singled out for its own agenda item.

While she was Obama’s UN ambassador, Susan Rice said, “We remain outraged and appalled by the continuation of Agenda Item 7 which is the serial bashing of Israel at the Human Rights Council. We continue to fight against it.”

Samantha Power, who took over as UN ambassador after Rice became Obama’s National Security Advisor, protested to the UN Security Council that

for as long as Israel has been a member of this institution, Israel has been treated differently from other nations at the United Nations. And not only in decades past – such as in the infamous resolution that the General Assembly adopted in 1975, with the support of the majority of Member States, officially determining that, “Zionism is a form of racism” – but also in 2016, this year. One need only look at the 18 resolutions against Israel adopted during the UN General Assembly in September; or the 12 Israel-specific resolutions adopted this year in the Human Rights Council – more than those focused on Syria, North Korea, Iran, and South Sudan put together – to see that in 2016 Israel continues to be treated differently from other Member States.

Even officials from Human Rights Watch, an organization whose own founder lamented is marred by an anti-Israel bias, have stated the obvious about the Human Rights Council. It “failed to act on human rights crises in a variety of places,” said HRW’s Global Advocacy Director Peggy Hicks in 2007, and “focused disproportionately on Israel and did so in way that was likely to be ineffective, because it failed to look comprehensively at the situation, including the responsibilities of Palestinian authorities and armed groups.”

On the very day the New York Times published its piece insisting that “conservatives” are the ones with complaints about the Human Rights Council, The Atlantic’s Krishnadev Calamur was more forthright with his readers. “The Council’s rules single out Israel for scrutiny of its actions in the occupied Palestinian territories. No other country is similarly named. The broader problem, however, are the countries doing the scrutinizing: countries like Saudi Arabia, Venezuela, and Ethiopia.”

The title of his piece: “The UN Human Rights Council Is a Deeply Flawed Body.” Not just for him. Not just for conservatives. Not just for liberals. But for a broad cross-section of observers.

Gardiner Harris, the New York Times reporter who pretended criticism comes from only one side of the ideological spectrum, should certainly know better. So why did he snip off and toss away complaints from so many other quarters? Did the Times hope to nudge its readers, many of whom aren’t particularly fond of the Trump administration, toward siding with the Human Rights Council, which Harris described in the opening paragraph as “the word’s most important human rights body,” and against its critics, whom he introduced as protesting nothing more than the council’s “frequent criticism of Israel’s treatment of Palestinians.” (As we’ve seen, the concerns aren’t about frequency, but rather disproportion and bias.)

It wouldn’t be the first time the newspaper made an effort to marginalize what are in fact mainstream views. Earlier this year, it cast recognition of Israel’s capital in Jerusalem as being popular with “a segment of hard-line pro-Israel American Jews.” In fact, as CAMERA has explained, those supporting the move include bipartisan congressional majorities in 1995 and 2017, President Obama’s ambassador to Israel, and mainstream groups like AIPAC, the Conference of Presidents of Major American Jewish Organizations, the American Jewish Committee, Hadassah and the Jewish Federations of North America.

Whatever the reason for the misinformation, the Times owes readers a correction that tells the the truth about bi-partisan, multilateral criticism of the Human Rights Council. The correction could even link to the newspaper’s own Nov. 21, 2006 editorial, entitled “A Discredit to the United Nations,” which says,

The old, unreformed United Nations Human Rights Commission was selective and one-sided, but occasionally managed to do some good work. That may be more than can be said for its successor body, the Human Rights Council, born earlier this year of a weak-kneed compromise from which the United States stood honorably apart. If this is the best the U.N. can do at reforming itself, it isn’t worth the effort.

The council is new, but its deliberations have already fallen into a shameful pattern. When it comes to the world’s worst and most consistent human rights violators, like China, Iran, North Korea, Myanmar and Sudan, there has been a tendency to muffle words and conclusions and shift the focus from individual and political rights to broader economic and social questions.

But when it comes to criticizing Israel for violations committed in a wartime context that includes armed attacks against its citizens and soldiers, the council seems to change personality, turning harshly critical and uninterested in broader contexts.