In late September 2018, David Fleishman, Superintendent of Public Schools in Newton, Massachusetts, sent an email to every school parent offering reassurance that complaints about anti-Israel bias in the high school history curriculum were without merit. But even as Fleishman sought to quash the seven-year-long controversy over how Israel was portrayed in the 10th grade World History course, one Newton teacher was busily intensifying the bias in another course.

In 2017, David Bedar, an outspoken history teacher at Newton North High School, devised a senior elective entitled “Middle East, Asia and Latin America” (MEALA), which included a unit on “The Israeli-Palestinian conflict.” The course presents competing Palestinian and Zionist accounts of the history of the conflict. However, the Zionist version contains errors and deficiencies that render it less persuasive than the Palestinian account:

In response to a Freedom of Information Act (FOIA) submission to the Newton Public School system by Americans For Peace and Tolerance (APT) requesting all Israel-related materials in use, including in the MEALA course,2 officials provided a Power Point presentation, outline notes, instructional plans, email communications among faculty and administration and accompanying materials. The Power Point presentation with some accompanying information is reviewed here.

I. Reframing the Arab-Israeli Conflict as the Israeli-Palestinian Conflict

A serious flaw in Bedar’s course is its reducing of the Arab war against Israel to the narrower focus of the Israeli-Palestinian struggle. With Palestinian opposition to Israel divorced from broader Arab and Muslim rejection of the Jewish state, the conflict is reframed, undermining students’ ability to gain a full perspective of the century-old conflict. It confers upon the Palestinians the status of underdog and victim.  As author Joshua Muravchik has noted, the image of Israel has been transformed from David to Goliath, and the Palestinians are now portrayed in the role of David. This reversal has long been a central component of the Arab propaganda campaign against Israel.3

The impact can be more readily understood by considering two maps. 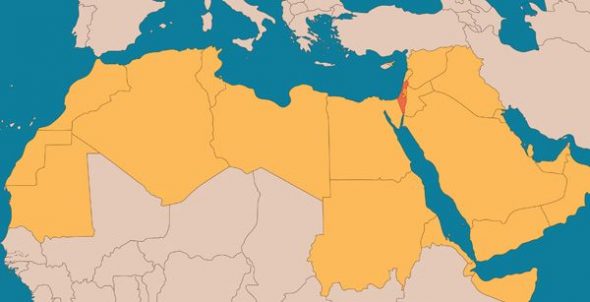 The first depicts the entire Middle East and North Africa, revealing the vast expanse controlled by 21 Arab states, a land area 600 times larger than Israel, with a population 50 times larger. All these states opposed Israel’s emergence and waged war against Israel. In the middle of this map, barely visible, is Israel. In the MEALA Power Point overview, there are 31 maps but not a single one illuminates Israel’s meager size in relation to its neighbors. 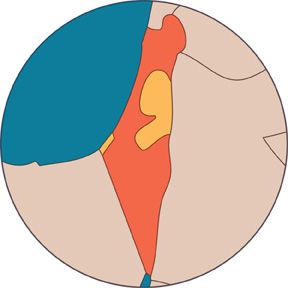 The second map zooms in on the tiny Jewish state. The 21 Arab states are no longer in view and only Israel, the West Bank and the Gaza Strip remain. Within this frame of reference, Israel looms large, while the Arabs, now consisting only of the Palestinians, appear small. David and Goliath have switched places. Variations on this map are found two dozen times in the MEALA presentation.

The course fails to convey the tenuous position of a tiny, lone Jewish state struggling to survive within a vast Arab realm and an even greater Muslim world community that rejects Israel’s right to exist and strives to isolate it.

The course leaves out fundamental issues regarding the conflict. For example:

II. Dismissing the Religious Component of the Conflict

One of the first slides, entitled Defining the conflict, asks:

“Religious battle?” and answers “No. A political struggle over competing national aspirations.”

With that curt dismissal, the teacher removes from discussion a major cause of the conflict and reduces it to a “dispute over real estate,”7 as one text source used in the course describes it.

Denial of the religious basis of the conflict is a widely held view among Newton history teachers, although ruling out this dimension of the conflict contradicts historical scholarship. Much of the Muslim world itself speaks clearly on the point, holding the land of Israel as rightfully belonging to Islam and denying Jews a right to sovereignty. Emails obtained through the FOIA request show Newton teachers scoffing at the notion that religion played an important role in the conflict. For example, a history teacher at Newton South High School ridiculed a critic for “fram[ing] this conflict in terms of a holy war.” The teacher added, “but we can’t allow this mistruth to be taught in our classrooms.”

The same teacher praised former Palestine National Council member Edward Said as “an incredible thinker and historian.” In fact, Said was not a historian, although his views have gained significant following among anti-Western and anti-Israel academics. 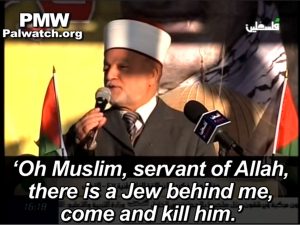 Screenshot from video on Palwatch.org: PA Mufti calls for violence against Jews.

The teacher’s comments reflect an overestimation of his knowledge and unfamiliarity with such distinguished Middle East historians as Nadav Safran, Bernard Lewis, Efraim Karsh, Barry Rubin and Fouad Ajami, who shed light on religion’s role in the conflict. Benny Morris’s book, 1948, makes the case that the war was an Islamic holy war.

But more importantly, this denial of religion’s role reflects unfamiliarity with what the Arabs, themselves, say about the conflict. For over a century, religious dogma, especially the call to participate in a Muslim war (jihad), has been used to instigate violence against Jews and justify acts of terrorism, including suicide bombings.

By excluding the important role of religion as a recruiting tool for a jihad against the Jewish state, the course material prevents students from understanding current events and issues in the Middle East.

Excluded from the course materials are:

III. Diminishing the Historic Jewish Connection to the Land 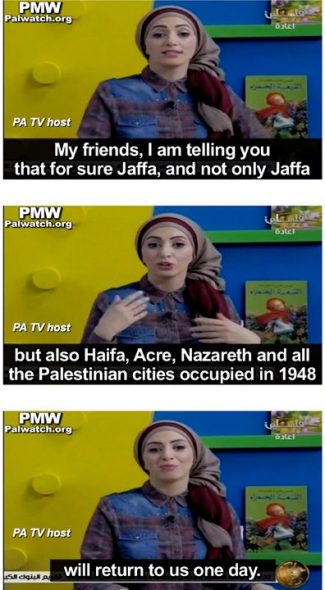 Screenshots from video on Palwatch.org: Palestinian TV host tells children that Israel is “occupied” territory that will “return” to Palestinians.

Conforming to the Palestinian narrative’s erasure of the Jewish religious and historical connection to the land, the MEALA course slide presentation also diminishes this connection while emphasizing and embellishing Arab historic ties with the land.

The unit selects as it starting point for weighing Jewish and Arab claims to the land late 19th century Palestine, a point at which the Jewish population was at a historic nadir and the Arab population far outnumbered it.

The slide presentation, along with supporting texts, lend credence to the Palestinian argument that the land was unfairly apportioned in light of the Arab population advantage over the Jews in the late 19th century. Palestinian rejection of Israel is then justifiable due to this unfair apportionment.

In any discussion of the competing claims to the land, it is essential to provide students with a full accounting of the changing population over many centuries:

IV. Concealing or Distorting Elements of the Conflict

Along with the concealment of key elements of the historic account to bias student perceptions, the MEALA slides and supporting texts contain numerous errors and omissions regarding key elements in the conflict:

The MEALA course fails to accurately convey the history of the Arab-Israeli conflict. Its omissions and factual errors serve the purpose of favoring the Palestinian narrative over the Zionist account. The course relies heavily on journalistic sources, some of which are prone to serious bias on the subject, including Al Jazeera, BBC, The New York Times and NPR.

The MEALA course’s portrayal of the Israeli-Palestinian conflict reflects the distorted depiction of the conflict found in many college courses on the topic and educational workshops for teachers. This approach de-emphasizes the traditional role of a historian to discern and distill facts rather than simply to relay competing narratives.

The teacher who designed the MEALA course attended teacher-training workshops at Primary Source, an education organization promoting “global and cultural learning in schools” whose Middle East workshops are underwritten by the government of Qatar, a family-run Emirate that is a major disseminator of Islamist and anti-Israel media. This raises questions as to the quality and balance of information conveyed in the workshops.15

The flaws in the MEALA course at Newton North High School contradict the Superintendent’s assurances to parents that controversial topics are handled properly to promote “critical thinking” and a “diversity’ of views. In fact, this course is evidence of a stealth form of anti-Israel indoctrination.

To print a copy of this article, click on the PDF file.