After reporting yesterday that “Iran has never threatened to attack Israel,” the Associated Press’ “clarification” today unfortunately casts those very threats as a matter of Israeli perception, as opposed to reality.  The Nov. 24 article by Nasser Karimi, dateline Tehran, outrageously claimed:

Iran supports militant groups like Hezbollah and Hamas that are pledged to Israel’s destruction. Iran has never threatened to attack Israel, but has vowed to retaliate if it is attacked. 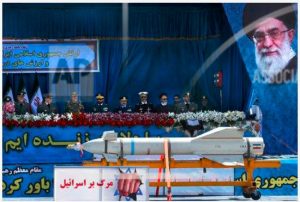 A missile with a banner which reads in Persian “Death to Israel” on display at a military parade just outside Tehran, April 18, 2017. (AP Photo/Vahid Salemi)

Iran has threatened to annihilate Israel on countless occasions. In April 2017, Iran paraded a missile inscribed with the words “Death to Israel,” as is visible in the AP photo at left.

Our stance against Israel is the same stance we have always taken. #Israel is a malignant cancerous tumor in the West Asian region that has to be removed and eradicated: it is possible and it will happen. 7/31/91 #GreatReturnMarch.

In its Sept. 25, 2018 report (“Israel’s Eradication — An Ideological And Practical Goal of Iran’s Islamic Revolution Regime“,),
MEMRI has documented  the following threats, all from June of this year (see the original report for footnoted sources):

Basij Deputy Commander Gen. Mohammad Hossein Sepehr said at a June 2 conference honoring Iranian athletes who refused to participate in a sports event with Israeli athletes: “Khamenei said that the Zionist regime will not exist in another 25 years. With God’s help, we promise to destroy Israel.”

Guardian Council secretary Ayatollah Ahmad Jannati said on June 5: “I am officially announcing that Israel’s life has reached its end. Soon we will celebrate the destruction of this [Israeli] regime in Palestine, so that we will be able to purge the Muslims’ first qibla [direction of prayer, a reference to Jerusalem] of them. Participating in a [Qods Day] march is a duty for all Muslims. The minimum mission we can carry out is participating in a Qods Day march [in order to] announce to the oppressed Palestinian people that they can be certain that we are with them and support them.”

Basij commander Gholam-Hossein Gheib Parvar said at a June 8 Qods Day march in Tehran: “Our aspiration and the aspiration of every freedom-seeking country is the destruction of the Zionist regime.”

Expediency Council member Gholam-Hossein Mohseni-Ejei also said at the Tehran Qods Day march on June 8: “All Muslims, in Iran and worldwide, feel a responsibility to support the Palestinian people, and hope to see the destruction of Israel with their own eyes soon… Certainly, with effort and persistence, this event [i.e. the destruction of Israel within the next 25 years] can happen sooner.”

Iranian President Hassan Rohani said on June 7, 2018: “I expect all our dear people of Iran to send this message… to the tyrannical Zionist regime: The Iranians have not forgotten Palestine and Jerusalem, and the liberation of Jerusalem remains the sacred aspiration of the Iranian people and of all Muslims, [as demonstrated by] their participation in the great Qods Day march. The day is not far off when the honorable Palestinian people will return to its home and the Muslims will be able to worship in Jerusalem, their first qibla.”

Also on June 7, the IRGC invited the people to show up enthusiastically en masse for this year’s Qods Day: “The only strategy that is helpful and accepted in the matter of the Palestinian cause is the strategy of ‘Palestine from the river to the sea,’ the Palestinians’ return to their homeland, the holding of free elections, and the [Palestinians’] determination of the destiny of the state [of Palestine] as they will it.”[9]

Ayatollah Jafar Sobhani said on June 7: “Israel is a cancerous tumor that for over 70 years has occupied the first qibla of the Muslims. The Imam [Ayatollah Ruhollah] Khomeini called the last Friday of Ramadan Qods Day, and created a great plan for the eradiction of this false regime.”[10]

The MEMRI report also contains links to numerous threats from previous years. The Jerusalem Center for Public Affairs (“Iranian Official and Social Media Call for the Destruction of Israel After the JCPOA“) has also extensively documented Iranian calls for Israel’s destruction.

In a story Nov. 24, The Associated Press reported that Iran frequently condemns Israel and predicts its demise. The story should have made clear that Israeli officials view any such comments from Iran as existential threats.

While AP says that “Israelis officials view” Iranian statements about Israel’s upcoming demise as threats, a few days ago the news agency had no difficulty identifying an Israeli minister’s statements about a Hamas leader’s limited time on this earth as a threat. Thus, the Nov. 21, 2018 AP article stated, as it should have (“Israeli Cabinet Minister: Gaza Leader’s Days Are Numbered”):

A senior Israeli Cabinet minister on Wednesday threatened to kill the leader of the militant Hamas movement ruling Gaza, vowing that another “large campaign” looms in which Israel will hit the militants hard.

Housing Minister Yoav Gallant, a former military general who commanded the Gaza region, said Hamas leader Yehiyeh Sinwar should “recalculate his route” before the next engagement.

“Yehiyeh Sinwar’s time is limited. He will not end his life in an old folks’ home,” he said, at the Jerusalem Post Diplomatic Conference. “He has to behave himself.”

The original Associated Press falsehood that Iran has never threatened to attack Israel appeared in countless media outlets around the world, including Haaretz, The New York Times, The Daily Mail, U.S. News and World Report, and many more. The subsequent “clarification” likewise appears in numerous outlets. In some online news sites, the problematic clarification simply replaced the entire original story, which is undoubtedly a significant improvement.