CAMERA’s Israel office yesterday prompted correction of a National Geographic article on the preservation of biblical archeological texts which contained an ahistorical reference to disputed West Bank land. As first noted yesterday on the Elder of Ziyon blog, an article in December print edition of National Geographic erroneously reported that the disputed territories had at one point prior to the Oslo Accords been under Palestinian control  (“The search for sacred texts”):

In 1993, after signing the Oslo Accords – which provided a framework for returning disputed territories to Palestinian control – the Israeli government launched Operation Scroll, an urgent survey of all the archaeological sites the country potentially stood to lose. 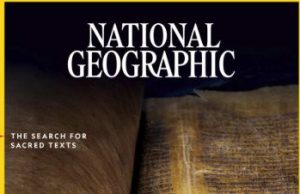 At no point in history prior to the Oslo Accords did Palestinians control the West Bank or any other land, and therefore it is inaccurate to refer to their “return” to Palestinian control. The disputed West Bank was under Ottoman control until 1917, at which point it fell under British control as part of the Mandate. In 1948, when the British withdrew, and Israel’s War of Independence ensued, the West Bank fell under Jordanian control. The Jordanians ruled the territory until the Six Day War, at which point, Israel gained control of the West Bank. The first Palestinian government came into existence only with the signing of the Oslo Accords.

CAMERA relayed this information yesterday to National Geographic editors, who thanked CAMERA and promptly published an online correction. It states: 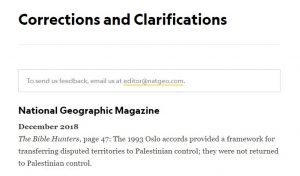 In addition, editors have published an amended of the article online (“Inside the cloak-and-dagger search for sacred texts“). It accurately reports:

In 1993, after signing the Oslo Accords—which provided a framework for transferring disputed territories to Palestinian control …