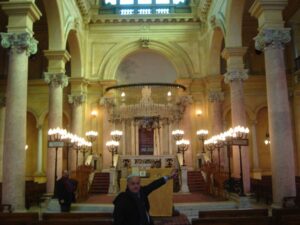 A Jan. 10 article about Egypt’s restoration of a historic synagogue in Alexandria stresses that very few Jews remain in the country, but ignores the fact that then President Gamal Abdel Nasser ordered the mass expulsion of the Jewish population in the 1950s, forcing tens of thousands to flee the country, leaving behind their vast assets (“Egyptian [sic] restores historic synagogue, but few Jews remain“).  AP’s Ahmed Hatem whitewashed the fact that Egypt drove out its Jews, writing:

The Jewish community’s modern exodus from Egypt began in 1948, after the creation of the state of Israel.

More Jews left for Israel and the West after the 1956 Suez war, when Israel, France and Britain launched a military offensive against Egypt.

Amid the war, animosity in Egypt increased towards Jews, who were seen as complicit in Israel’s action.

The three-paragraph summary of the last few decades in the multi-millenial history of Egypt’s Jews says not a word about their expulsion, attributing their flight to “animosity.” JIMENA, Jews Indigenous to the Middle East and North Africa, recounts the fraught history papered over by AP:

Gamal Abdel Nasser was appointed the second President of Egypt, from 1956 until his death in 1970, and with his rule began widespread pan-Arabism and worsening conditions for the Jews.  The Suez Crisis, in 1956 was an attack on Egypt by the French, British and Israelis.  As a result, Nasser declared that the Jews were enemies of the state and the massive expulsion of the Jews continued with 25,000 Jews fleeing. Jews were given 2 days to evacuate their property, which was later confiscated by the government, and were forced to leave with one bag and no more than twenty dollars in hand.  Nearly 1,000 of those who remained in Egypt were imprisoned or tortured.  Jewish refugees who had once prospered in Egypt were left with nearly nothing.

The Six-Day war occurred in 1967 in Israel.  Again, there was an insurgence of violence toward Jews in Egypt based on ethnic cleansing ideology. During the war, all Jewish males over the age of 16 were imprisoned in interment camps or tortured and only 2,500 Jews remained in Egypt.  In the 1970’s, as a result of international pressure, Jews were given permission to leave the country.  The Jews in Egypt were among the wealthiest Jews in all of the Middle East.  In 1971 it was estimated that Jews lost $500 million in personal property, $300 million in communal religious property, and $200 million in religious artifacts.  As more and more Jews were forced out of Egypt the numbers continued to rise.

AP regularly notes that in 1948 Palestinian Arabs “fled or were expelled” from their homes, or that they “fled or were driven out.” The majority of Palestinian Arabs who left did so at the behest of their own leaders who promised a triumphant return after the supposed impending destruction of the nascent Jewish state. Why doesn’t the leading news agency similarly acknowledge the expulsion of Egypt’s Jews who posed no threat to the country?