The Associated Press coverage today of overnight Israeli airstrikes against Hamas buildings in the Gaza Strip in response to the launching of arson balloons which sparked some 20 fires yesterday in southern Israel is a far cry from the “world-class journalism” that the news agency promises. 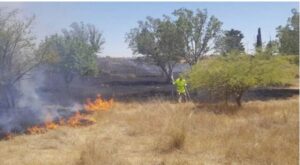 First, the article fails to make clear the fact that Israel’s airstrikes this morning were in response to Palestinian arson balloon attacks targeting southern Israel.
Thus, the article begins:

Israeli aircraft carried out a series of airstrikes at militant sites in the Gaza Strip early Wednesday, the first such raids since a shaky cease-fire ended the war with Hamas last month.

The airstrikes targeted facilities used by Hamas militants for meetings to plan attacks, the Israeli military said, blaming the group for any act of violence emanating from Gaza. There were no immediate reports of casualties.

On Tuesday, hundreds of Israeli ultranationalists, some chanting “Death to Arabs,” paraded in east Jerusalem in a show of force that threatened to spark renewed violence. Palestinians in Gaza responded by launching incendiary balloons that caused at least 10 fires in southern Israel.

Rather than making a general statement about unspecified violence emanating from Gaza, the army put out a very clear statement that the airstrikes were in response specifically to the arson balloons. AP obscured the causation between the arson attacks and airstrikes.
Unlike AP, other wire services made clear in their headlines and very first sentence that the airstrikes were a response to the arson balloons. Thus, AFP reports (“Israel strikes Gaza in response to incendiary balloons”):

Israeli carried out air strikes on the Gaza Strip early Wednesday after militants in the Palestinian territory sent incendiary balloons into the south of the country . . .

In addition, AFP reiterates further down in the story:

The Israel Defence Force said that in response to the “arson balloons”, its fighter jets struck military compounds belonging to the Hamas terror organization”. . . .

Israeli aircraft struck Hamas sites in Gaza on Wednesday after incendiary balloons were launched from the Palestinian enclave in the first such attacks since a fragile ceasefire ended 11 days of deadly fighting last month.

The military said the strikes came in response to the launching of balloons laden with incendiary material, which the Israeli fire brigade reported caused 20 blazes in open fields in communities near the Gaza border. (Emphases added.)

Second, AP understates the extent of the fires, referring to “at least 10.” In contrast, Reuters, AFP,BBC,Times of Israel,Jerusalem Postand others referred to “at least 20,” “around 20,” or “20.”
Finally, AP buries the fact that the arson attacks took place throughout the day, well before the flag march began. Indeed, a Reuters story yesterday evening about the controversial “flag march” in Jerusalem made clear (“Israeli nationalists march in East Jerusalem, raising tension with Palestinians“):

Several hours before the event started, however, Palestinians in Gaza launched incendiary balloons which the Israeli fire brigade said caused at least 20 blazes in fields in Israeli communities near the fenced border with the enclave.

Let’s get this on the record right now, so there’s no confusion later on: this is happening *before* the flag march set to take place in Jerusalem’s Old City today. https://t.co/He3Dost9Du

Numerous fires blazed in southern Israel near Gaza on Tuesday, with fire services saying at least 20 were sparked by balloon-borne incendiary devices launched by terrorists in the Strip.

According to Fire and Rescue Services, some 20 blazes — mostly small brush fires — broke out in the Eshkol and Sha’ar Hanegev regions immediately adjacent to the Gaza Strip throughout the day, which investigators determined were started by airborne arson attacks from Gaza. The fires were quickly brought under control by firefighting teams from Fire and Rescue Services, the Parks Authority, the Jewish National Fund, the Israel Defense Forces and volunteers from local communities.

Meanwhile, clashes broke out between dozens of Palestinian protesters and IDF troops on the Gaza border amid tensions over a controversial flag march planned for later in the day in Jerusalem. (Emphasis added.)

While AP reported in the third paragraph that “Palestinians in Gaza responded [to the Jerusalem march] by launching incendiary balloons,” it deeply buried in paragraph 23 what amounts to an obtuse allusion (at best) to the fact that waves of balloon arson attacks preceded the march: “In the afternoon, Hamas-linked Palestinians launched some incendiary balloons from Gaza, setting off at least 10 blazes [sic] in southern Israel, according to Israel’s national fire department.” Even so, the chronology is still not clear, as the article does not state that the march took place in the evening.

The egregious obscuring of the causation of events, underreporting of the number of fires, and the concealment of the fact that  arson attacks preceded the Jerusalem flag march is sub-standard journalism, not the “high quality” journalism that the news agency promises.