After CAMERA informed editors of the error discussed below, Bloomberg commendably corrected its story. A second piece that had likewise claimed the UN has ruled Israel's occupation is illegal was also corrected.

May 26 – A Bloomberg article last week inaccurately reported that Israel’s capture of the West Bank has "been ruled an illegal occupation in repeated UN resolutions” (“Even a Failing Jared Kushner Peace Plan May Help Israel Annex the West Bank,” May 22). 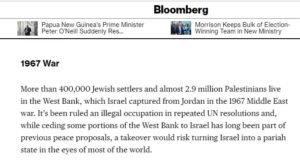 While the UN has made clear that any Israeli annexation of the West Bank would be “inadmissible,” none of its post-war resolutions — General Assembly resolutions 2252, 2253, 2254, and 2256, and Security Council resolutions 236, 240, and 242 — argued that the capture of the West Bank from Jordan and subsequent occupation was unlawful.

The drafters of Security Council Resolution 242, which called for an Israeli withdrawal from unspecified “territories occupied in the recent conflict,” have repeatedly clarified that their resolution calls for any Israeli withdrawal to be to “secure and recognized boundaries” negotiated in peace talks between the parties to the war, and do not regard the occupation as illegal:  “Until that condition is met, Israel is entitled to administer the territories it captured – the West Bank, East Jerusalem and Gaza Strip – and then withdraw from some but not necessarily all of the land,” explained Eugene Rostow, one of the resolution’s drafters and an Under Secretary of State for Political Affairs in President Johnson’s administration.

That reflects the view of other international law scholars.

For example, George P. Fletcher, the Cardozo Professor of Jurisprudence at Columbia University School of Law, wrote in the New York Times that “it is not illegal for victorious powers to occupy hostile territory seized in the course of war until they are able to negotiate a successful peace treaty with their former enemies.”

And Alain Pellet, a sharp critic of Israel, asserted that “Even if the deprivation of its right to self-determination infringes an imperative norm of international law, occupation remains a legal institution, governed by the rules of law.”

Notably, The New York Times has twice in the past corrected after erroneously reporting that the international community considers the Palestinian territories illegally occupied.

CAMERA has contacted Bloomberg to request a correction. Stay tuned for an update.