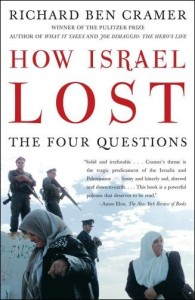 According to a blurb on the fly leaf of Richard Ben Cramer’s latest book, How Israel Lost: The Four Questions:

Once in a great while, a book comes along that not only discusses a topic of interest, it changes the boundaries of that discussion forever. This is such a book.

Even allowing for the publisher’s hyperbole, readers might have expected a semblance of serious investigation and discussion of the intricacies of Israeli-Palestinian relations. After all, the author was Middle East correspondent for the Philadelphia Inquirer between 1978 and 1984 and won a Pulitzer prize for his reporting in 1979. He is also the author of several well regarded books on non-Middle East topics.

Cramer’s latest book, however, disappoints on all counts. Far from changing the boundaries of discussion, it contains neither an original thesis nor trenchant argument. Instead, the complexities of the Israeli-Palestinian situation are reduced to the hackneyed superficialities of Israel’s detractors: In dominating the Palestinians, Israel has lost its soul; Israel does not understand what motivates Palestinians; Israel must hand over all of the West Bank, Gaza and East Jerusalem to the Palestinians to save its soul.

Relying on flippant, one-sided anecdotes instead of careful research, the book is littered with distortions and sloppy errors. According to Cramer:

Systematic Palestinian violence against Israeli Jews began “only after the Jewish state stepped up its program of settlements, expropriations, assassinations” post-1967.

What of the Arab pogroms of the 1920’s and 30’s, and the Fedayeen terrorist attacks throughout the 1950’s and 60’s?  The is either ignorant of historical anti-Jewish violence or chooses to ignore it.

Terrorism was in abeyance for a couple of months before July 31, 2001 when “the Israelis assassinated two Hamas commanders in Nablus.”

In fact, driveby shootings, suicide bombings, and attempted attacks killed 13 Israelis and wounded at least 15 more during that period.

In Jenin, “half-a-camp [was] mowed under by the Israelis in retaliation for the Passover suicide bomb of 2002.”

In fact,  the UN concluded that under 10% of the camp was destroyed in fighting between Palestinian combatants and the IDF. Damage was caused by armed Palestinians boobytrapping buildings and attacking Israeli soldiers, and Israeli military operation were in response to a month-long frenzy of Palestinian terrorist attacks that killed or wounded hundreds of Israeli civilians.);

Israel’s “separation fence” is “not really a fence, but a massive concrete wall–about twenty feet high.”

In fact, more than 95% of the barrier includes no wall and no concrete.

The New York Times is “the former house organ of American Zionism.”

In fact, the Times’ notorious historic antipathy toward Zionism included active campaigning by the owner against the movement.

This is a distortion of what Begin said.  In fact, Begin’s phrase referred not to Palestinians in general but explicitly to terrorists crossing the border from Lebanon to target Israeli children.

These are among dozens of errors that Cramer makes.

Written in a pseudo-Borscht Belt comedic style (slang-filled sentences peppered with such Yiddish insults as “pisher,” “schnorrer,” “putz,” and “schlub”), much of Cramer’s book is mocking and sarcastic in tone.

Cramer’s greatest scorn is reserved for Israel’s religious Jews, stereotyped as ignorant and greedy. The author’s descriptions are so malicious as to be likened by several reviewers to an “anti-Semitic screed.” (See, for example, Baruch Kimmerling in Salon.com, July 19, 2004.)For example, one five-page anecdote purporting to describe Israeli rabbinic authorities in action, caricatures the rabbis as ignorant buffoons hoodwinked by the dishonest food manager in a Tel Aviv hotel in which they are determining adherence to kashruth. The apocryphal anecdote is rife with details so obviously absurd, it can only have been devised by someone completely ignorant of Jewish law. While Cramer acknowledges being a “ham-on-rye” Jew, he nevertheless uses his Jewish identity to impart authority to his discussions on Israel and all matters Jewish.

Evoking the Jewish Hagaddah which tells the story of the Israelites’ redemption from Egypt through four symbolic questions asked by a child, the author puts forth his ideas in answer to four questions of his own devising.

Chapter I. Why do we care about Israel?

Cramer’s answer summarized: We don’t anymore. In the past, Americans reflexively supported Israel, influenced and encouraged by a vast Israeli propaganda machine. But now “the ground has shifted” because Israel lost its soul and Americans are savvy to Israel’s crimes against the Palestinians.

Excerpts: For decades, we’ve read and talked about Israel, we’ve backed and begirded Israel, we’ve paid for Israelis’ first-world standard of living… because we came to assume, somehow, they are like us. The Israelis, no dummies, did what they could to foster this impression…And so the first growth industry of Israel (even before tart Jaffa oranges found their market in Europe) was what the locals called hasbarah–which literally translates as “explaining,” but we might call it propaganda, or spin…Maybe it was the daily dose of video, flashed around the world–Israeli tanks blasting holes in buildings, and Palestinians weeping in the West Bank or Gaza…maybe the death of some nice, well-meaning Westerners, Americans or Brits, who were trying to stop Israeli bulldozers from destroying the houses of Arabs…or maybe the simple realization that the Israelis sang us a song of David, when they’d long since become Goliath. One way or another, Israel lost control of the narrative that is her lifeline…somewhere along the line, we got the feeling, “they aren’t like us.” Or maybe we don’t want to be like them. And this is just one of the ways–one big one–how Israel lost.

Chapter II: Why don’t the Palestinians have a state?

Excerpt: One trick the Palestinians never learned from the Jews was how to take control of their own national narrative and employ it for their own aims. Here’s where things stand in Palestine: an Arab population of more than three million–an educated and cultured people–is being abased.

Chapter III: What is a Jewish state?

Cramer’s answer summarized: One held hostage to Jewish law by medieval and ignorant rabbis who are corrupt.

Excerpts: The orthodox were the first people who tried to bend the will of the Jewish state by throwing stones…If it’s not one poor schlub but the whole state that has to knuckle under, then the
path around the rabbis and their rules can cost millions…It seems that it’s always easier to cut a deal with the rabbis than to fight it out…What is Jewish scholarship but a nonstop, nitpicky, all-sides-considered-and-dismissed lifelong wrangle?…the Jewish state has been forced to conform to Jewish law…amid strictures and exigencies that grow more twisted, more rigid and onerous, with each little deal or concession – still, no one does anything to change it…

Chapter IV: Why is there no peace?

Excerpts:…any Jew who’s not an Israeli, and not on psychotropic drugs, could solve this Peace-for-Israel thing in about ten minutes of focused thought….[Oslo] was a phony “peace process” from the jump–from the basic idea that underlay Israeli attitudes and actions…who are they to give nationhood?…in the end, Israel got what she wanted–a continued occupation…

If you are looking for thoughtful analysis, or insight on contentious questions, don’t bother with this book. Cramer himself acknowledges on page 270 of the 295-page book that he’s “always wrong about the Middle East.”

“I’ve been wrong big and basic, and for years at a time,” he admits.

Apparently unfettered by the constraints of journalistic ethics, Cramer uses the book as a vehicle to vent what seems to be a personal animus against “zionism” (spelled throughout the book with a lower case “z”) and religion. The result is a shrill and rancorous rant.