A slightly different version of this article first appeared in The Algemeiner on August 26, 2022.

If you ever wondered how far “anti-Zionists” like Peter Beinart are willing to go to not see antisemitism, a new, low bar has been set.

Along with a handful of other individuals, Beinart recently signed onto a letter entitled “Stop Instrumentalizing Antisemitism,” which portrays the remarks of a UN official, Miloon Kothari, as “misrepresented” and “mischaracterized” by “politically-motivated groups” that are “seizing this opportunity to leverage allegations of antisemitism.”

The letter serves as the clearest example yet of the willful ignorance of Beinart and his fellow “anti-Zionists.” Like the plot of the Netflix movie “Don’t Look Up,” about the approach of a comet that would destroy civilization on earth, the letter is a story of individuals who can deny the obvious only by diverting their gaze and labeling everyone else as alarmists.

Here are Kothari’s actual remarks, made in a podcast published on July 25:

“And also, I think that it’s not only governments, but we are very disheartened by the social media that is controlled largely by whether it’s the Jewish Lobby or it’s the specific NGOs. A lot of money is being thrown in to trying to discredit us.”

Beinart et al. claim that these comments have been “mischaracterized,” and that Kothari was just “criticizing Israel’s systemic refusal to cooperate with UN investigations and the escalating campaigns by politically-motivated groups to discredit and delegitimize” Kothari’s work. According to the signatories, “[n]either of these critiques are in and of themselves antisemitic, although both should have been articulated appropriately and with more sensitivity.”

First, notice the difference in tone.

Kothari’s opponents are “politically-motivated groups” (also referred to as “right-wing advocates” elsewhere in the letter) while Kothari himself just lacked a bit of sensitivity. This difference in language gets at one of the major themes of the letter itself. The position outlined by Beinart and the rest makes sense if you make only the most generous assumptions, no matter how outlandish and implausible, of good intentions on the part of Kothari, while simultaneously making only the most cynical assumptions, no matter how stretched and illogical, of Kothari’s critics.

But even generous assumptions can’t save Kothari. Other than a profound, disqualifying level of ignorance, there is simply no plausible innocent explanation for suggesting the “Jewish lobby” controls social media in this context. Even if every other comment uttered by Kothari was legitimate, thoughtful criticism of Israel, this comment stands out as it is not targeted at Israel, but at the “Jewish lobby.” According to Kothari, that collective Jewish entity, which he very clearly separates from “governments” (i.e., Israel), is nefariously controlling social media for a sinister purpose of discrediting him and his co-commissioners. 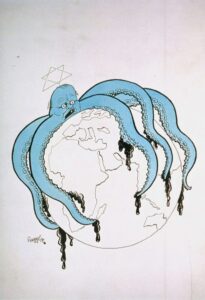 An antisemitic propaganda cartoon from the 1930s promoting the claim of a nefarious, worldwide Jewish conspiracy.

This is as an undeniable use of the classic antisemitic trope of Jews having too much power over institutions like governments, banks, and the media, and of using that power to advance sinister goals in an underhanded way.

From the forgery of the “Protocols of the Elders of Zion” to Henry Ford’s “The International Jew,” the trope has been a staple of the most vicious strands of antisemitism.

Even a United Nations report on antisemitism identified this trope as an example of the ancient hatred. In 2019, then UN Special Rapporteur on Freedom of Religion, Ahmed Shaheed, wrote:

“Assertions that Jews…constitute a ‘powerful, global cabal’ that manipulates governments, the media, banks, the entertainment industry and other institutions for malevolent purposes, are also expressions of antisemitic attitudes.”

Beinart, too, has called out this trope when politically convenient. For example, in a 2019 article, he identified as an example of the use of an “anti-Semitic stereotype” a Trump campaign ad “which featured three Jews — George Soros, Lloyd Blankfein and Janet Yellin — alongside language about ‘global special interests’ that ‘control the levers of power.’”

There simply aren’t many examples of antisemitism targeted at Jews as Jews more obvious than Kothari’s remarks in July. Yet, Beinart and his cosignatories still chose to depict them as merely “insensitive” and as “criticism of Israel.”

It’s a clear illustration of what others have written elsewhere regarding “anti-Zionists” and their opposition to the widely accepted International Holocaust Remembrance Alliance’s definition of antisemitism. Instead, these anti-Zionists embrace the “Jerusalem Declaration on Antisemitism” (“JDA”), which finds quite a bit of support among those who themselves have histories of promulgating antisemitic tropes. As law professor David Schraub wrote last year about the JDA:

“[A] good definition is characterized by what it excludes as much as what it includes. But in practice, the JDA is being interpreted almost solely as a tool for denying things are antisemitic. It scarcely ever is cited to actually declare something antisemitic, at least in a concrete and contested case. Consequently, the JDA has garnered enthusiastic reception from individuals whose main take on antisemitism is that we hear too much about it.”

We can certainly count the signatories among those whose main take seems to be “we hear too much about” antisemitism. After all, according to them, the “right-wing,” “politically-motivated” organizations (i.e., the mainstream Jewish community) are insidiously “seizing this opportunity to leverage allegations of antisemitism.”