A slightly different version of this article was published at JNS.org on April 13, 2022.

All too often, the anti-Israel narratives at the United Nations run directly against the reality on the ground. Around the same time Palestinian rioters were attacking the Jewish holy site of Joseph’s Tomb, the UN’s latest anti-Israel inquiry was willingly lending its ear to someone who had just a week earlier used a pair of events to claim the Muslim holy site of al-Aqsa Mosque was in danger.

On April 9, just a few days before Passover, Palestinian rioters attacked and severely damaged the Jewish holy site of Joseph’s Tomb in Nablus. This isn’t the only attack on Joseph’s Tomb. On September 26, 1996, a Palestinian mob attacked and firebombed the same site, killing six Israelis. Attacks in 2000 and 2011 each led to the death of an Israeli. Multiple firebombing attacks occurred in 2015, in 2016 a Molotov cocktail was thrown at Jewish worshippers at the site, and on August 31, 2016, another shooting attack wounded an Israeli.

The deadly September 1996 attack is particularly relevant. It had been incited by claims that a “tunnel” being dug at the Temple Mount was threatening al-Aqsa Mosque in Jerusalem. As Charles Krauthammer wrote in TIME Magazine a couple weeks later:

“[D]uring the ‘tunnel’ riots of two weeks ago, there were incidents of murder and sacrilege. One occurred in Nablus, an Arab town under P.L.O. control. There is in Nablus a Jewish religious site, Joseph’s Tomb. Under the P.L.O.-Israeli peace accords, it remained a tiny enclave peopled by devout Jews and, for protection, a few Israeli soldiers. On Sept. 26, it was attacked by a Palestinian mob throwing firebombs. Six Israelis were killed. Many prayer books were burned.”

Despite the fact that the “tunnel” was, in fact, just the opening of an additional entrance to an already existing archaeological excavation under the Western Wall (a Jewish holy site) that did not threaten any Islamic holy sites, actors such as the Arab League and the UN added fuel to the fire by legitimizing and broadcasting the “al-Aqsa is in danger” myth. Nary a word was spared for the deadly attack by Palestinians on the Jewish holy places of Nablus that did occur, and which was incited by the libel spewed by the Palestinians, Arab League, and the UN.

Fast forward to 2022. On March 26, an Arab Israeli by the name of Mohammed Barakeh, chairman of the “High Follow-Up Committee for Arab Citizens of Israel,” spoke at a pair of “Land Day” events held in Gaza and the Negev. At one of these events, speakers “called for the continuation of ‘armed resistance.’” Notable among the other speakers was a senior figure from the terrorist organization Palestinian Islamic Jihad, Khaled al-Batash. According to the Meir Amit Intelligence and Terrorism Information Center, al-Batash told the crowd that he:

“[came] to tell the Arabs ‘inside the 1948 territories’ that they stood with them and that the ‘sword of Jerusalem’ would ‘not return to its scabbard.’ He also said the ‘resistance’ [i.e., the Palestinian terrorist organizations] would have their say if Israel took ‘aggressive measures’ against Jerusalem or the residents of [the] Sheikh Jarrah [neighborhood of east Jerusalem].”

The “sword of Jerusalem” is a not-so-subtle reference to the title Hamas gave the May 2021 conflict. While it has been convincingly argued by Jonathan Schanzer of the Foundation for Defense of Democracy that the issue of Jerusalem was used as a pretext by Hamas to launch the war, it is without a doubt that Palestinian incitement around the issue of Jerusalem went into overdrive during the weeks before the war. In particular, the “al-Aqsa is in danger” libel was employed, a form of incitement that goes all the way back to the deadly anti-Jewish pogroms of the 1920s in Mandate Palestine. Back then it was the likes of the (future Nazi-allied) Grand Mufti of Jerusalem, Hajj Amin al-Husseini, proclaiming that the Jews were threatening Al-Aqsa Mosque.

Today, in addition to Palestinian leaders, individuals like Barakeh are still loudly claiming there is a Jewish threat to al-Aqsa Mosque, knowing it to be a tried and true, and particularly potent, form of inciting anti-Israel and antisemitic violence. At one of the March 26 events, Barakeh told the crowd (using Google Translate):

“‘These days that we are facing are harsh and difficult, and we see the continuation of the brutal siege on Gaza, we see the spread of cancerous tumors in the West Bank, and we see what is happening in the practices of the occupation in Jerusalem, where they are trying to assassinate its national features.’

He pointed out that ‘these days in which we welcome Ramadan, the Israeli media are promoting what could happen in the holy month. This frantic promotion for the past two weeks about security preparations in the language of the occupation is an expression that they are harboring a bloody criminal scheme in Ramadan.’

He pointed out that the occupation depicts the month of Ramadan as the month of terrorism, and they want to continue the settlers’ storming of Al-Aqsa and they plan on Easter to make the door for the Talmudic and extremist Zionist groups to perform their prayers in Al-Aqsa, which threatens to ignite a big fire.

Baraka stressed, ‘We are the sons of one people, one cause, and one future,’ warning the occupation and its government of the infernal scheme they are planning and preparing for a temporal and spatial division in Al-Aqsa.” 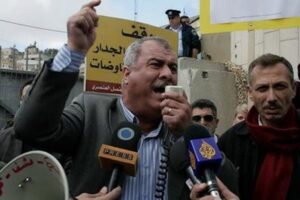 Five days later, Barakeh, alongside the anti-Israel organization Adalah, was the first (to the author’s knowledge) to be invited to speak to the UN’s Commission of Inquiry (“COI”) in Amman, Jordan. The COI is tasked with an unprecedentedly open mandate including investigating the “root causes” of the conflict, and its three commissioners had openly labeled Israel as guilty even before they were appointed to the COI. Though the COI’s mandate has no temporal limits, it specifically references events “leading up to and since 13 April 2021,” corresponding to events that occurred on the Temple Mount (upon which Al-Aqsa Mosque sits) prior to the May 2021 conflict. In other words, the COI’s mandate is predisposed to adopting the “Jews threaten al-Aqsa” narrative.

Notably, during the March 31 meeting with the COI, Barakeh falsely accused Israeli Prime Minister Naftali Bennett of the same type of incitement Barakeh himself engaged in five days earlier. According to the Palestinian Authority’s Wafa News Agency (and confirmed by Adalah’s press release):

“[Barakeh] also expressed deep concern about Israeli authorities giving out weapons to right-wing settler groups, especially after Israel’s Prime Minister called on citizens, earlier this week, to take up arms and use them against Palestinians in the streets.”

None of this is true. What Bennett actually said, following several attacks deep inside Israel amidst a wave of deadly terrorism not seen since 2006, was:

“As of now, soldiers in mandatory, career and reserve service, from rifle-level 3 and up, will carry their weapons home from their bases. We are also currently evaluating a larger framework to involve civilian volunteers who want to help and be of assistance. What is expected of you, citizens of Israel? Alertness and responsibility. Open your eyes. Whoever has a license to carry a weapon, this is the time to carry it.”

Yet the narrative heard by the COI, delivered by Barakeh, is the one they almost certainly wanted to hear to confirm the conclusions they had reached even before the COI was formed. Like the UN in 1996, the COI will almost certainly ignore the dangerous levels of incitement and violence against Israelis and Jewish holy sites and pin the blame instead on imaginary Jewish incitement and threats against Islamic holy sites.

When the COI delivers its report in June, barring a radical awakening by the commissioners, it will once again spew largely baseless slander against the Jewish state. As in the past, media coverage of these reports will likely overlook the extremely shoddy, unprofessional nature of the “investigation,” the heavily biased background of the “investigators,” and the context of who the commissioners chose to seek out. For those who value honest, fact-based discourse, it will be essential to remember details like the COI’s meeting with Barakeh when reviewing the report’s conclusions.