The case of Jordan Burnette and his repeated attacks on synagogues in New York’s Bronx borough comes at a period when hate crimes against Jews in New York are at a high.

Over a period of several nights in late April, the 29-year-old Burnette went on a vandalism spree, smashing windows, trashing prayer books, and inflicting considerable property damage in Jewish institutes in the Riverdale neighborhood, and causing apprehension and fear in the Jewish community. After an intensive search by the New York Police Department’s Hate Crime Unit, which released surveillance footage of the perpetrator attacking a synagogue, Burnette was arrested. Under the state’s new bail laws, however, he was subsequently released under supervision, due to return to court on May 7 to face multiple hate crimes charges.

The case garnered widespread media coverage, in Jewish, local, regional, national and even international media outlets. The Riverdale Press, the Gothamist, the New York Daily News, Newsday and the New York Post covered the story, as did the Associated Press, ABC, CBS, NBC, FoxNews and CNN. The Washington Post, Wall Street Journal,  USA Today, and Newsweek, too, reported on the events, as did many smaller U.S. news outlets. Internationally, the story was reported in London’s Daily Mail and Independent, in addition to Israeli media outlets. It was deemed newsworthy because antisemitism in New York, in the U.S. and in the world is still soaring. 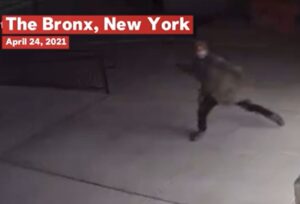 One major media outlet, however, stood out as an exception, even though it is New York-based. The New York Times, which touts itself as the “paper of record” apparently did not consider coverage of the antisemitic hate crimes fit for its pages, not even in its local New York section. Nor did it report on a newly-released report by the ADL showing that antisemitic incidents across the U.S. were at historic highs, and that New York led the other states with 336 incidents reported in 2020.

It is not as if the New York Times desists from reporting on hate crimes. During the same period that the paper was ignoring hate crimes targeting the Jewish community in the city, it ran at least a dozen articles referencing hate crimes against other minorities.

So why didn’t editors find the story about antisemitic hate crime newsworthy? Perhaps they did not find the vandalism of synagogues worth mentioning because the perpetrator was not a white supremacist — rendering his crimes therefore less compelling, or at least not supporting their concept of antisemitism as emanating from Nazis, the far-right, and white supremacists. Or perhaps the newspaper was just reverting to its pattern of reporting during the Holocaust, when it deliberately downplayed news about the persecution of Jews by the Nazis (as Northeastern University journalism professor Laurel Leff documented in her book, Buried by the Times What is clear is that even as antisemitism rises, you can’t count on learning about it from the New York Times.

(Note: A slightly different version of this article appears as an op-ed in the Algemeiner on May 7, 2021)