Without an ounce of self-awareness, The New Yorker review of Timothy Brennan’s new biography of Edward Said intones: “Besieged for much of his life by ‘the superior power of incessantly repeated lies,’ Brennan writes, ‘[Said] knew he was not going to win.’” 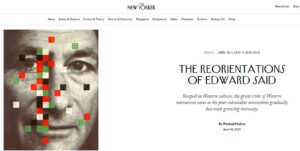 Of course, Said was deeply cognizant of the superior power of incessantly repeated lies, as for years he himself fabricated his alleged upbringing, imagined home in Jerusalem and subsequent dispossession. The resilient legacy of his fictitious childhood tales persists to this day, including in Pankaj Mishra’s aforementioned New Yorker piece (“The Reorientations of Edward Said,” April 19, 2021 and print edition, April 26 & May 3, 2021).

Echoing Said’s years-long misrepresentations about his past, Mishra reports:

In Jerusalem, Said went to St. George’s, a boys’ school for the region’s ruling castes. In Cairo—where his family moved in 1947, shortly before Jewish militias occupied West Jerusalem . .

While Said was born in Jerusalem in 1935, his family home was in Cairo and that is where he spent his childhood — not in Mandatory Palestine. His family did not move from Jerusalem to Cairo in 1947.

An earlier version of this review misidentified the city that was Edward Said’s childhood home and misstated details about Jerusalem’s division into Jewish and Arab areas. Although Said was born in Jerusalem, his family’s home was Cairo; they did not move from Jerusalem. Jerusalem was not partitioned into Jewish and Arab halves in 1947. In 1949, control of the city was divided as part of an armistice.

Previously, on Oct. 1, 2003 The Times published the following correction:

An obituary on Friday about Edward W. Said, the Columbia University literary scholar and advocate of a Palestinian state, misidentified the city that was his childhood home and misstated the date of Jerusalem’s partition into Jewish and Arab areas. Although Mr. Said was born in Jerusalem, in 1935, his family’s home was Cairo; they did not move from Jerusalem. Jerusalem was partitioned in 1949, not 1947.

Furthermore, there is no evidence that Edward Said had attended the St. George school. He never appeared in the school registry as an enrolled student, and David Ezra, whom Said claimed was a classmate, does not at all recall Said, though he was easily able to identify other students in the class, reported the late scholar Justus Weiner (“‘My Beautiful House’ And Other Fabrications By Edward Said,'” Commentary, September 1999). Said had said he and Ezra sat together in the back row. Yet Ezra had poor sight and always sat in the front, Weiner reported.

Weiner’s research about Said’s fabrications concerning his past was likely the basis of The New York Times’ commendable corrections. And yet, in his piece, Mishra dismisses Weiner: “An article in the Wall Street Journal in 1999, titled ‘The False Prophet of Palestine,’ claimed that Said had fabricated his childhood in Jerusalem, a defamatory accusation later repeated in Time.” Weiner wrote “The False Prophet of Palestine.” Apparently, according to The New York Times, Weiner’s work was truth-telling, not defamatory.

Said deployed “his personal parable of a paradise destroyed and dispossessed,” as Weiner put it, “as an allegory of the Palestinian people.” Indeed, just as Mishra accepts Said’s personal story of dispossession, he adopts the same narrative on the national scale. To that end, displaying his ignorance of history alongside his apparent affinity to what Said called “the politics of dispossession,” Mashri writes:

Israel’s Prime Minister, Menachem Begin, who doggedly opposed a Palestinian state, was encouraging Jewish settlements in the West Bank and Gaza, territories seized from Palestinians in 1967.

Neither of these territories was seized from Palestinians in 1967 or at any other time. The former was occupied by Jordan from 1948 to 1967. Jordan annexed the West Bank in 1950. Prior to 1948, the West Bank, like Israel, was administered by the United Kingdom, as part of the British Mandate of Palestine. Prominent media outlets includingThe New York Times and Voice of America have previously corrected mischaracterizations of West Bank territory as “Palestinian.” Indeed, a 1957 New York Times map (at left) clearly demonstrates that the West Bank was part of Jordan.

As for the Gaza Strip, prior to 1967, it was in Egyptian — not Palestinian — hands. The CIA World Factbook, for instance, details that the Gaza Strip “was incorporated into the Ottoman Empire in the early 16th century. The Gaza Strip fell to British forces during World War I, becoming a part of the British Mandate of Palestine. Following the 1948 Arab-Israeli War, Egypt administered the newly formed Gaza Strip; Israel captured it in the Six-Day War in 1967.”

In a related error regarding 1948, Mishra cites “The creation of the state of Israel—following a U.N. resolution, on Palestinian land . . . ” The land on which Israel was established in 1948, as explained above, was not “Palestinian,” but part of the British Mandate of Palestine. Until Israel turned over parts of the West Bank to Palestinian control under the Oslo Accords of the 1990s, never before had any territory been under Palestinian governance. The United Nations’ partition plan would have divided the British Mandate of Palestine into Israeli land and Palestinian land, but Palestinian leadership rejected the plan, choosing instead to attack the nascent Jewish state.

At the end of the article, Mishra repeats the fallacy about “Palestinian lands” for the third time, referring to “the Israeli government’s recent resolve to annex Palestinian lands.” The land that had been considered under Israel’s sovereignty plan was Area C of the West Bank — under full Israeli civil and security control of the West Bank. In addition to the aforementioned New York Times and Voice of America corrections, CBS corrected after referring to Area C as “Palestinian territories,” as did The Wall Street Journal, Deutsche Presse-Agentur, Los Angeles Times and Washington Post.

As for the Israeli government’s so-called “resolve [ie strong determination] to annex Palestinian lands,” Mishra neglects to remind readers that, in fact, the Israeli government took a pass on the opportunity to annex disputed West Bank land which President Trump’s “Peace to Prosperity” plan had offered them, opting instead for peace with Gulf states as part of the Abraham Accords.