In response to communication with CAMERA, VOA commendably amended the Editor's Note which erroneously stated that West Bank lands had been on Palestinian administration before 1967. See below for a detailed update.

CAMERA's Israel office today prompted correction of a May 18 Voice of America article, "Palestinian PM: Moment of Truth as Israeli Annexation Looms," which had erroneously misidentified disputed West Bank land as "Palestinian land." In its efforts to correct that error, however, VOA unfortunately introduced a new error, wrongly stating that before 1967 the West Bank land in question had been under Palestinian administration.

Originally the article had erred, stating that Israeli Prime Minister Benjamin Netanyahu "reaffirmed his plans to annex Palestinian lands in the West Bank." 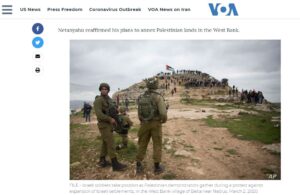 The West Bank's rightful and ultimate disposition remains under contention, and so designation of the disputed West Bank as “Palestinian lands” is a violation of journalistic impartiality. Since 1967 and until the Trump plan, the West Bank’s status was to be resolved by negotiations anticipated by U.N. Security Council resolutions 242 (1967) and 338 (1973), the 1995 Israeli-Palestinian interim accords, the 2003 international “road map” and related diplomatic efforts taking 242 and 338 as reference points. The co-authors of resolution 242, U.S. Under Secretary of State Eugene Rostow, U.S. ambassador to the United Nations Arthur Goldberg, and British ambassador Lord Caradon made clear at the time and subsequently that Jews and Arabs both had claims in the territories, no national sovereignty over the territories had been recognized since the end of Ottoman rule and negotiations would be necessary to resolve competing claims.

Indeed, in no time in history was the West Bank “Palestinian land” until the Oslo Accords put certain areas (called Areas A and B) under control of the Palestinian Authority. Israeli plans to extend sovereignty in parts of the West Bank apply to Area C, which is under full Israeli control, and not Areas A or B.

A senior editor at VOA today thanked CAMERA for contacting him about the error, and subsequently corrected. The amended article no longer includes the partisan characterization of the land in question as being rightfully "Palestinian," and now states:

Netanyahu reaffirmed his plans to annex about 30 percent of the West Bank, including Israeli settlements and areas populated mainly by Palestinians.

Editors added the following note under the article alerting readers to the correction:

Editor's Note: An earlier version of this article inaccurately referred to areas of the West Bank subject to possible annexation by Israel as “Palestinian lands.” In fact the areas in question have not been under Palestinian administration since 1967. They are considered by the United Nations to be occupied by Israel, and are described as disputed by the Israeli government.

In response to communication from CAMERA, VOA today demonstrated its commitment to getting the facts right, correcting the erroneous Editor's Note. The amended text no longer contains the incorrect assertion that West Bank lands had been under Palestinian administration prior to 1967, and adds that the West Bank lands that are part of the Israeli sovereignty plan are under Israeli civilian and security control per the Oslo Accords:

An earlier version of this article inaccurately referred to areas of the West Bank subject to possible annexation by Israel as “Palestinian lands.” While home to both Palestinians and Israeli settlers, most of the areas in question were left under Israeli civil and military control by the Oslo Accords. They are considered by the United Nations to be occupied by Israel, and are described as disputed by the Israeli government.

We commend the VOA's determination to report correctly.