The Palestinian territories have [so far] recorded 309 Coronavirus infections, of which 36 are in the city of Jerusalem and 13 in the Gaza Strip (April 13).

The spokesperson on behalf of the Palestinian government announced the first fatality due to Coronavirus in Jerusalem on Saturday of a woman in her seventies. This raises the number of the virus’s fatalities in the Palestinian territories to three cases. (April 18)

Palestinian Minister of Health, Mai Al-Kaila, said on Tuesday that a new death of a woman due to Coronavirus was recorded in the city of Jerusalem, which raises the total number of fatalities in the Palestinian territories to four cases. (April 21) (All translations, emphases and in-bracket remarks are by CAMERA Arabic.) 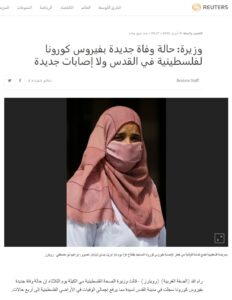 Numerous media outlets have corrected after having falsely labeled Jerusalem, or disputed parts of the West Bank, as “Palestinian,” including AP, DPA, The Los Angeles Times,  The New York Times, and most recently The Wall Street Journal.

Other articles which mention Coronavirus patients in Jerusalem avoid specifying that those cases are included in a total of cases “in the West Bank” or “in the Palestinian territories.” For example, a May 5 article reported:

The total number of Coronavirus infections has reached 538 cases, the latest of them were six cases which were recorded on Tuesday, four in As-Samu’, Hevron Governorate and two in At-Tur, Jerusalem.

Alternatively, some articles referred to “Gaza, the West Bank and East Jerusalem,” specifying where Palestinians reside and are affected by Covid-19, appeared in a report from. For example, Reuters reported April 24:

The electric lanterns and ornate decorations of Ramadan would normally be hanging in the streets of Gaza, the West Bank and east Jerusalem by now, […] The holy fasting month is expected to start on Friday but, as elsewhere, Palestinians this year are facing the prospect of celebrations without the usual large gatherings […]

While Reuters reporters working in Arabic now refrain from including Jerusalem as part of the Palestinian territories, they report direct quotations of Palestinian Authority officials who do place Jerusalem in their territories. A  May 14 report recounted the words of Palestinian Prime Minister Muhammad Shtayyeh speaking about a fund created to help Palestinians affected by Covid-19:

“the ‘Waqfat ‘Izz’ fund donations will cover all Palestinian regions, so that it would include the West Bank, Jerusalem and the Gaza Strip …”

In an apparent anomaly, however, on May 17 Reuters reporter Ali Sawafta referred to Jerusalem to as if it was “in Palestine”:

Meanwhile, the number of recorded infections in Palestine has risen to 560 cases […] the Minister of Health said that the number of active cases, i.e. those where there is still an infection, rose to 103 cases of which 59 in the city of Jerusalem, 8 in the suburbs of Jerusalem, 30 in Hebron Governorate, 2 in Nablus Governorate and 4 cases in the southern governorates.

CAMERA contacted Reuters on this last point, noting that the news agency’s Arabic service has previously corrected the improper use of the word “Palestine,” including in the recent past.