The Associated Press, which in 2018 falsely reported that “Iran has never threatened to attack Israel,” again today erases anti-Israel threats, fabricating: Palestinian President Mahmoud “Abbas has always been opposed to violence.”
The claim in today’s article by Mohammed Daraghmeh, entitled “Abbas says PA no longer to abide by accords with Israel, US,” is patently untrue. In a blistering Jan. 14, 2018 speech, Abbas stated his support for Palestinians to use their weapons (15:40 in the video below):

Whoever has [weapons] – go ahead and do it. I say this out in the open. If you have weapons, go ahead. I’m with you, and I will help you. Anyone who has weapons can go ahead.

The Al-Aqsa [Mosque] is ours … and they have no right to defile it with their filthy feet. We will not allow them to, and we will do everything in our power to protect Jerusalem…
We bless every drop of blood that has been spilled for Jerusalem, which is clean and pure blood, blood spilled for Allah, Allah willing. Every Martyr (Shahid) will reach Paradise, and everyone wounded will be rewarded by Allah.

In a 2014 speech posted on Fatah’s Facebook page, Abbas said:

In the name of Allah the Merciful “Permission [to fight] has been given to those who are being fought, because they were wronged. And indeed, Allah is competent to give them victory.”

Indeed, Fatah, which Abbas heads, frequently endorses violence. For instance, Abbas’s “permission [to fight]” is followed by a Fatah clip hailing rocket attacks against Israeli citizens and threatening: “We will turn Tel Aviv into a ball of fire!”
In 2013, Abbas granted the “highest order of the star of honor” to Nayef Hawatmeh, head of the Democratic Front for the Liberation of Palestine,  “in recognition of his important national role in service of the Palestinian cause and the Palestinian people.” As reported in Gatestone Institute, the DFLP is responsible for multiple deadly terror attacks, “including the killing of 22 schoolchildren and 4 adults after taking them hostage in Ma’alot, the killing of 9 children and 3 adults in an attack on a school bus, the killing of 7 in a Jerusalem bombing, the killing of 4 hostages in an apartment building in Beit Shean, all of which took place in the 1970’s. In addition, the DFLP has participated in and claimed responsibility for dozens of other terror attacks, including a suicide bombing near Tel Aviv that killed 4 in 2003.”
In March 2016, Abbas praised a terrorist who tried to kill an Israeli soldier by ramming her car into her: “We see in her a martyr who watered the pure earth of Palestine with her blood.”
In 2014, Abbas sent a condolence letter to the Palestinian terrorist who shot and wounded Temple Mount activist Yehuda Glick, later a member of Knesset. (Israeli journalist Gal Berger tweeted a copy of the letter, seen below). Abbas wrote of the attacker:

With anger, we have received the news of the vicious assassination crime committed by the terrorists of the Israeli occupation army against [your] son Mu’taz Ibrahim Khalil Hijazi, who will go to heaven as a martyr defending the rights of our people and its holy places,” 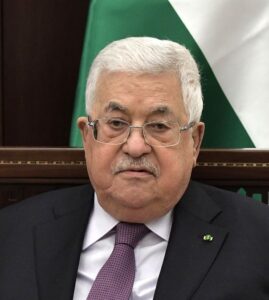 In July 2017, Abbas encouraged ongoing violent rioting at the Temple Mount, even after Israeli authorities dismantled metal detectors from the holy site installed after three Israeli Arab terrorists shot to death two Israeli policemen and wounded a third at the site. Abbas hailed the violence:

Since Israel tried to change the situation, the [Palestinian] residents of Jerusalem have risen as one [they launched violent riots – Palestinian Media Watch]. You have objected to all of the [Israeli] steps, and we have supported you in what you have done and what you are doing. We are with you in everything that you have done and are still doing, as you are causing us pride, and you are taking care of your Al-Aqsa Mosque, your land, your dignity, your people, your religion, and your holy sites. This is the response to everyone who wants to harm our holy sites. Jerusalem is ours. It is our capital and it is [under] our sovereignty, and therefore what you [Palestinians] are doing is right.

Abbas has met with the families of terrorists like Baha Alyan and Bilal Ghanem, who attacked passengers on a bus in Armon Hanatziv using a gun and a knife, ‎killing two, including a 78-year-old man, and wounding four Israeli, and Thaer Abu Ghazaleh, who stabbed five Israelis with a screwdriver. In what way does meeting with the families of terrorists, promising them compensation, oppose violence? Likewise, as Israeli officials frequently note, hefty Palestinian Authority payments to imprisoned terrorists and the families of suicide bombers and others killed as they carried out attacks against Israel does little to “oppose violence.”
The Palestinian president, who supposedly has “always been opposed to violence,” also attended the funeral and laid a wreath for the mastermind of the Munich massacre, in which Palestinian terrorists murdered 11 Israeli athletes in 1972. As documented by Palestinian Media Watch, Al-Hayat Al-Jadida, the official Palestinian Authority newspaper, reported that Abbas attended the 2010 funeral, where “a red carpet was laid out for the arrival of the body, and the military band played the fond farewell melody.” An Aug. 20 article in the government-controlled Al Hayat eulogized Al-Hindi as “one of the stars who sparkled at one of the stormiest points on the international level — the operation that was carried out at the sports stadium in Munich, Germany, in 1972. That was just one of many shining stations.”
Likewise, in 2010, Abbas sent a condolence letter to the family of Mohammed Oudeh, another Munich massacre terrorist. CNN reported:

“He wrote in his letter to his family, ‘He is missed. He was one of the leading figures of Fatah and spent his life in resistance [against the occupation] and sincere work as well as physical sacrifice for his people’s just causes,’ ” the [Palestinian WAFA] news agency quoted Abbas as saying.

Incidentally, in his autobiography, Oudeh alleged that Abbas provided the funding for the Munich massacre.
And there have been other instances of praise for the Munich terrorists. For instance, according to The Jerusalem Post, this past April, Abbas’ Facebook page published a post honoring Mahmoud Yusuf al-Najjar, Kamal Nasser and Kamal Adwan, senior members of the PLO and Black September, killed by the Mossad due to their involvement in the Munich Olympic massacre.
CAMERA has contacted AP to request correction of this egregious falsehood. Hopefully, the correction will be more forthcoming than the AP’s clarification of the 2018 falsehood that “Iran never threatened to attack Israel.” About those very real threats, AP’s clarification had prevaricated, casting Iranian saber-rattling about Israel’s demise as an Israeli perception:

In a story Nov. 24, The Associated Press reported that Iran frequently condemns Israel and predicts its demise. The story should have made clear that Israeli officials view any such comments from Iran as existential threats.

Stay tuned for an update.
This post was updated on May 25 to add Abbas’ praise for the Munich terrorists and for the head of the DFLP.
Donate Now