Palestinian leaders are never responsible for the inflammatory actions they take.

That’s the overarching New York Times narrative about the Arab-Israeli conflict, and that’s the message again of today’s story, by reporters David M. Halbfinger, Adam Rasgon and Mohammed Najib, about Palestinian threats to cut off security cooperation with Israel.

The online title signals the arrival of yet another Times story framed to present Palestinians as lacking any agency: “Abbas, Cornered by Israeli Annexation, Opts for ‘Judgment Day’ Scenario.” Why would Palestinian Authority president Mahmoud Abbas stop cracking down on terrorists planning to attack Israel? It’s not his fault. It is because Israel has “cornered” him.

The rest of the story follows from there. Reporters quickly tell readers that “As long as he has led the Palestinian national movement, Mr. Abbas has opposed violence and espoused negotiations with Israel.”

But as CAMERA’s Tamar Sternthal explained yesterday, after the Associated Press likewise characterized Abbas as always opposing violence, the claim is patently untrue. In a January 2018 speech, for example, Abbas asserted that, while he wouldn’t send his military to go toe-to-toe with Israel, he welcomed individual Palestinian attacks:

Whoever has [weapons] – go ahead and do it. I say this out in the open. If you have weapons, go ahead. I’m with you, and I will help you. Anyone who has weapons can go ahead.

In a militant 2019 speech, he announced that Palestinians “will enter Jerusalem as fighters by the millions.”

“We will all enter it, all of the Palestinian people and all of the Arab and Islamic and Christian nations,” he continued. Prior to that, in 2015, Abbas praised violence by saying, “We bless every drop of blood that has been spilled for Jerusalem, which is clean and pure blood, blood spilled for Allah, Allah willing. Every martyr will reach paradise, and everyone wounded will be rewarded by Allah.”

One needn’t look so far back. Just this month, Abbas’s official Palestinian Authority television station broadcast, for the fourth time in the span of a week, a music video calling on Palestinians to “strap on the explosive belt” and detonate in Israeli cities.

Of course, these calls to violence have a negative effect on the conflict. As the Canadian Network for Research on Terrorism, Security, and Society noted in a May 2020 research paper, “Official Palestinian incitement, from across the political spectrum, enflames long-standing grievances against Israel by promoting terrorism as a virtuous outlet.”

The theme of Israeli responsibility for Abbas’s actions appears throughout the piece. “Israel’s push may be steering Mr. Abbas’s strategy to a dead end,” the reporters say. Always steered, never steering. “Mr. Abbas has few other cards to play,” they continue, as if the Palestinian leader has been a creative problem solver up until now, dealing out various card combinations in an effort to solve the conflict.

To the contrary, when Israeli prime minister Benjamin Netanyahu implemented a 10-month security freeze in order to coax the Palestinians to the negotiating table, Abbas essentially responded with a 9-month negotiating freeze. And after the moratorium on Israeli building expired, he again refused to talk peace.

This was after Israel’s Ehud Olmert offered Abbas an unprecedented peace offer in 2008. What card did the Palestinian leader show in response? “Abbas turned it down,” explained the Washington Post’s Jackson. But the concealment of multiple Israeli peace offers, and multiple Palestinian rejections of these peace offers, has become the Big Omission in too much coverage of the Arab-Israeli conflict, not least in reporting by the New York Times.

The authors conceal more than just the Palestinian rejection of peace offers. They also avoid a forthright accounting of Palestinian violence. They tell readers that Abbas’s announcement that he would end security cooperation with Israel was followed by “activists in Mr. Abbas’s Fatah party promising to step up their ‘resistance against the occupation.’” They do not, though, explain to readers that Palestinians understand “resistance” to refer to the murder of Israelis.

In one of many examples, a Hamas leader, after his organization targeting a city bus and killed 17 Israelis, vowed to continue such “resistance”:

At Carmel hospital, where most of the injured were treated, Odette Elezra, 51, said she was waiting for a bus on the opposite side of the road when the blast occurred.

“I saw the explosion and then glass was flying everywhere,” she said. “Everything seemed to go dark and it was like I was in a tunnel.

“I looked back and saw the bus burning and bodies everywhere.I have never seen anything like it.”…

Abdel Aziz Rantisi, a spokesman for Hamas in the Gaza Strip, praised the attack but did not claim responsibility. “We will not stop our resistance,” he said.

The Times reporters briefly mention the possibility that Abbas’s announcement about ending security cooperation, which they’ve taken pains to blame on Israel, could possibly lead to increased terrorism, which they take pains to suggest is not what Abbas intends. They also suggest to readers that Palestinians could hardly be blamed for such attacks as the one that ripped apart the city bus: “Palestinians despairing and feeling that they have nothing to lose by resorting to violence.” 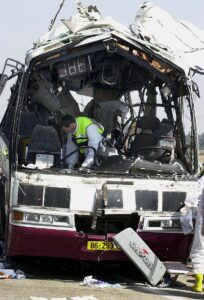 A Palestinian attacker killed 17 when he bombed bus 37 in Haifa.

But the newspaper’s reluctance to refer to Palestinian violence is apparent. Consider the reporters’ history of Israeli-Palestinian tensions that have threatened security cooperation. “Israeli police outraged Palestinians by abruptly setting up metal detectors at the entrances used by Muslim worshipers at the Aqsa Mosque complex in Jerusalem,” Halbfinger and company write, consistent with the newspaper’s tendency to cast the conflict as a series of Israeli actions that upset Palestinians.

The fact that the closure was the result of a deadly Palestinian terror attack that “outraged” Israel goes unmentioned.

Consider, too, the muddled sentence that will leave readers believing the so-called stabbing intifada, which in reality was a period of non-stop Palestinian stabbing attacks against Israelis everywhere, was instead characterized by Palestinians bravely standing down riot police: “A more meaningful interruption occurred in 2015, during a spate of stabbing attacks — sometimes called ‘the uprising of knives’ — when Palestinians stood down riot police for several weeks,” the Times asserts.

Again, the article’s hesitancy to frankly deal with Palestinian terrorism follows an ongoing pattern at a newspaper, which in recent years has referred repeatedly to Hamas gunmen as “protesters”; characterized the equally deadly antisemitic terror group Islamic Jihad as “nettlesome” while cutting from stories references to their terror designation; cast deadly sniper and rocket attacks as displays of “impatience” with Israeli misbehavior; and covered for the Palestinian government’s payments to the families of suicide bombers — even while making a point of casting Israeli army researchers who combat the coronavirus and develop missile defense as being best known for “pioneering cutting-edge ways to kill people and blow things up.”

Today’s piece defending Abbas’s threat to end security cooperation is just more of the preferred narrative, from reporters accustomed to ignoring the Palestinian leader’s history as a Holocaust denier and concealing his ongoing antisemitism.