Last Thursday, the New York Times framed the Israeli army’s fight against Covid-19 as a break from its quest for new ways to “kill people” and “blow things up.” Just two days later, even as Jewish organizations protested that story’s framing, the paper doubled down with an egregiously skewed piece about Palestinians imprisoned for, among other security offenses, the murder of Israeli civilians. 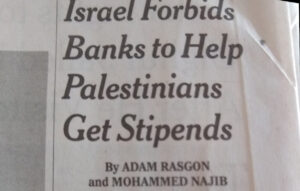 A New York Times headline casts Israeli efforts to stanch Palestinian payments to terrorists and other security prisoners as a policy meant to stop Palestinians in general from getting financial help. (Via Kweansmom, Twitter)

The story, titled “Israel Cracks Down on Banks Over Payments to Palestinian Inmates,” discusses Israeli legal measures targeting Palestinian stipends that have sent hundreds millions of dollars to Palestinians involved in violent attacks against Israelis, and to the families of suicide bombers and other terrorists. Many see the payments as incentivizing anti-Israel violence.

That view, though, runs counter to the newspaper’s preferred narrative of Israeli malevolence and Palestinian victimization, so the paper does what it takes to minimize readers’ exposure to Israeli feelings about the Palestinian policy, which some critics refer to as “pay for slay.”

After an opening sentence that mentions the new Israeli policy targeting banks that process payments for Palestinians who, in the newspaper’s gentle wording, “have spent time in Israeli jails,” a second paragraph introduces the Palestinian and Israeli views of these payments. Mostly, the Palestinian view:

The Palestinians defend the funds as vital welfare that compensate for an unfair military-run justice system, provide income for families who have lost their primary breadwinners and enable released prisoners to reintegrate into society. But the Israelis denounce the practice as rewarding terrorism.

The New York Times introduces the opposing perspectives on the controversy, with 35 words to explain how Palestinians feel and 9 words explaining how Israelis feel.

Why do the Times reporters, Adam Rasgon and Mohammed Najib, devote four times as many words in this introductory paragraph to fleshing out the Palestinian view of the funds compared to the terse sentence the give about opposition to the payments? The best that can be said is that the lopsided passage accurately reflects the bias of the story as a whole. Throughout the piece, Palestinian support for the payments is prominently featured, while Israeli concerns are sparse, and mostly buried toward the end of the article.

The story is top-loaded, for example, with emotional messages from Palestinians about the “occupation’s tyranny,” the “disgraceful decision” by banks cooperating with the Israeli decree, the “prisoners of freedom” who “have sacrificed their lives in the darkness of prisons,” and the supposed “rights of the prisoners and martyrs.” That’s just in the first half of the piece. At the start of the second half, they hear a plea from a Palestinian man jailed for, as the newspaper put it, “participating in clashes with soldiers,” and who asks readers, “Why is Israel always looking for another way to make us pay again?”

The reporters’ own language, too, serves the cause. The lede refers to “payments that the Palestinian Authority distributes to the families of thousands of Palestinians who have spent time in Israeli jails,” as if the issue has anything to do with common criminals. Indeed, Yossi Kuperwasser has noted that “while ordinary prisoners, such as car thieves, do not receive a salary, every person committing acts of terror is on the PA payroll.”

And while the reporters dutifully quote the Palestinian position that the stipends in question are “vital welfare” payments, they don’t bother to point out that the World Bank has suggested otherwise. “The level of resources devoted to the Fund for Martyrs and the Injured does not seem justified from a welfare or fiscal perspective,” explained a 2007 World Bank report, which also critiqued the disproportionate money spent on prisoners.

It isn’t until paragraph 19, of 21 total, that readers, if they’ve made it that far, encounter the first quotation from the Israeli side of the debate in the form of some sterile language from an army statement and decree.

In other words, the New York Times didn’t bother to quote even a single individual to give a human view of how Israelis (or other victims of Palestinian terror) view the payments to the attackers and their families.

Kay Wilson, who survived a brutal terror attack and witnessed the murder of her friend, has been among the outspoken critics of payments to Palestinian prisoners. In a letter to a British parliamentarian, Wilson described the attack as follows:

In 2010 I was hiking in the Judean Hills with my friend Kristine Luken, when two Palestinian terrorists attacked us. We were held for 30 minutes at knife-point, then gagged and bound before being butchered with machetes. Kristine was murdered. I watched my friend being killed before my eyes.

I only survived because I played dead. I was stabbed 13 times and had over 30 bones broken by the sheer force of the blows. Each time my attackers plunged their machetes into me I could hear my bones crunch, and my flesh ripping from the serrated blade. They left, only to return moments later and roll me over. I watched my attacker plunge the knife into my chest, just missing my heart. 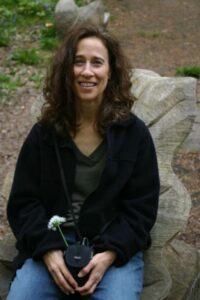 Kristine Luken was murdered while hiking with Kay Wilson in a forest near Jerusalem. The Palestinian leadership is paying her killer.

Being stabbed 13 times was excruciating,” she later stated on Twitter. “The 14th stab” – her reference to the Palestinians stipends, and particularly the Western aid that effectively subsidizes them – “was even more painful.” Wilson clearly has plenty to say about Palestinian payments to those who attacker her. The New York Times, which seems intent on selling the Palestinian view of the payments to killers, just doesn’t seem to want readers to hear her.

The paper makes only an opaque and passing reference, meanwhile, to Palestinian payments to families of suicide bombers, when it states of Israel’s crackdown that “The decree apparently also bans financial institutions from dealing with stipends that the Palestine Liberation Organization gives to the families of slain assailants, whom the Palestinians refer to as ‘martyrs.’”

“Slain” – by whom? It is an odd word to describe an array of attackers that includes those who killed themselves as part of their attack on Israelis. At any rate, this is all the newspaper says about the payments to the families of suicide bombers. While it twice quotes Palestinians describing the murderers as “martyrs,” the journalists don’t use the word “murder” or “suicide bombing” anywhere in the piece to give a sense of the type of people who have earned Palestinian money for their families. And they certainly don’t quote any Israelis impacted by the suicide attacks.

Arnold and Frimet Roth, whose young daughter Malki was murdered when a Palestinian suicide bomber killed 15 civilians, nearly half of them children, at a Sbarro pizzeria, are aware of the vast sums Palestinian leaders have paid to the attackers and their families. “It’s humiliating that we, victims of these convicted jihadist terrorists, parents of murdered children, have to raise our voices about this,” they’ve said of the payments, “and evidently we are alone in doing so.”

Evidently. The New York Times seems more interested in promoting the narrative of those who financially reward the murder than in sharing the perspectives of grieving Israeli parents.