If anyone is still in doubt about how extreme the anti-Israel bias is in New York Times reporting, one need just glance at the lede of the latest article on the Israeli army’s battle against the Covid-19 pandemic. Unable or unwilling to portray Israeli life-saving measures in an entirely good light, Jerusalem bureau chief David Halbfinger begins the article, titled “Israeli Army’s Idea Lab Aims at a New Target: Saving Lives,” by casting the research and development arm of Israel’s defense establishment in derogatory terms that Israel’s enemies might use:

Killing what people? Blowing what things up? Without specifying the ‘things” and “people” being targeted, Halbfinger, like Israel’s enemies, portrays the IDF’s research and development team as bloodthirsty demons seeking new ways to carry out a nefarious plan of murder and destruction. 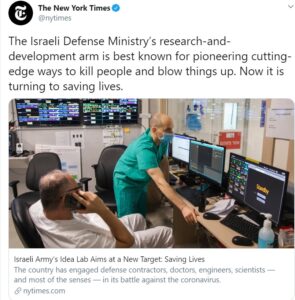 The goal and research of Israel’s Ministry of Defense/IDF Directorate of Defense Research & Development is, and has always been, to defend the citizens of a country that has been besieged by hostile enemies since its start — enemies bent on annihilating the country and killing its citizens.

So yes, Israeli defense research has focused on countering the threat of missiles fired into Israel by terrorists inside Gaza and produced the Iron Dome to “blow up” rockets, mortars and artillery shell aimed at Israeli civilians.

Yes, Israeli defense research has focused on developing new technology  to locate and “blow up” tunnels built by terrorists to infiltrate and carry out large-scale terror attacks in Israel or kidnap Israelis.

Yes, research has focused on developing a complex system of underground and underwater barriers  along its border with Gaza to prevent infiltration of terrorists into Israel.

And yes, research has focused on developing new drones and ways to protect buildings and buses from attack, pinpointing the threat to “kill” an assailant without harming innocent bystanders.

Israel’s enemies also characterize these defensive efforts in derogatory terms: they bemoan the creation of an underwater barrier as “a further attempt by Israel to tighten its siege of the Gaza Strip” and decry the Iron Dome’s interception of missiles as “tak[ing] away all of Hamas’s military leverage.”

But it is a big deal when a New York Times reporter abandons all pretense of objective reporting to take a page from that playbook in the characterization of Israel’s defense.

When a former Israeli military official took to Twitter to challenge Halbfinger’s word choice, the Times reporter defended his language with a syllogism defending imprecision.

Enemies are people, too. You’d have to be predisposed to think Israel kills indiscriminately — or weary of such accusations — to read it that way. All armies are trained and equipped to kill, not just Israel’s. The point here is to contrast with the mission of saving lives.

Of course, the newspaper’s reporters would easily understand the straightforward distinction between, say, an attack ad characterizing one-time presidential candidate John Kerry as a “killer” and a sober account of the Vietnam veteran having shot an enemy combatant.  The nuance just seems to get lost when it comes to Israel.

Precision and nuance tossed aside, it’s true that a key function of militaries is to “kill people” and “blow things up.” But the contrast between Halbfinger’s sinister characterization of Israeli military research, on the one hand, and how the paper describes American attempts to maintain its military edge, on the other, is striking.

DARPA, the Defense Advanced Research Projects Agency that works to develop military innovations for the U.S. Defense Department, develops materiel meant to kill enemy combatants. Its Predator drone has preyed on countless victims. Its Sea Hunter is meant to hunt enemy vessels and kill their occupants.

And indeed, Halbfinger notes that Israel’s Directorate of Defense Research and Development, the focus of his story, is “Israel’s version of … Darpa.” He then immediately draws a contrast:

While Darpa gave the world the internet and GPS, its Israeli counterpart has not had a similar impact on civilian life. Its work on the coronavirus, officials say, could be a start.

That’s consistent with the way the paper often refers to DARPA – not as people-killers and blower-uppers, but as a program that helps the US against its enemies, or even saves lives. In a story last month, for example, the Times hailed DARPA in glamorous terms, as “the futuristic research wing of the U.S. Department of Defense.” If its projects kill “people,” New York Times journalists somehow find enough column inches to note who those people are, as when they described DARPA innovations as being “used to kill people identified as Al Qaeda leaders in Afghanistan and Yemen.” Elsewhere, the paper has described military research as helping armies to “kill people on the battlefield without human involvement.”

Another Times article about DARPA projects describes the technology in the most straightforward of terms, saying its “weapons are needed for the United States to maintain its military edge over China, Russia and other rivals, who are also pouring money into similar research.”

In contrast with the dark shades Halbfinger uses to characterize Israel’s security research, the article on DARPA went on to cast deadly American weapons as protective of American lives:

The new weapons would offer speed and precision unmatched by any human while reducing the number — and cost — of soldiers and pilots exposed to potential death and dismemberment in battle. The challenge for the Pentagon is to ensure that the weapons are reliable partners for humans and not potential threats to them.

Israel’s Directorate of Defense Research and Development is the same as America’s Defense Advanced Research Projects Agency. Just not in the pages of the New York Times.

That’s because Halbfinger’s negative characterization is part of a pattern. The New York Times can’t seem to shake the habit of denigrating Israel for behaving in ways consistent with other Western democracies.

In an article last year about the U.S. designating Iran’s Revolutionary Guard as a terror organization, for example, the paper absurdly suggested that perhaps the State Department should sanction Israel’s intelligence service, too.

Even when the New York Times Jerusalem bureau chief cited something as innocuous as the Israeli prime minister’s plea that citizens protect the elderly from the coronavirus,the reporter couldn’t seem to help himself, using the occasion to cast Netanyahu as a “scold.”

In defending his language about Israel’s defense research, Halbfinger insisted on Twitter that only those “predisposed to think Israel kills indiscriminately — or weary of such accusations” would find anything wrong with his language.

Jewish organizations are certainly weary of such accusations. That’s why American Jewish Committee CEO David Harris described the New York Times language as “vile,” and why the ADL’s Jonathan Greenblatt slammed it as “sensationalist” and “irresponsible.”

To understand why so many are so weary, we need look no further than the New York Times itself, whose reporting too often seeks to denigrate Israel and its attempts to defend its citizens from those seeking to harm them, even while soft-gloving the terror organizations that are sworn to the country’s destruction.