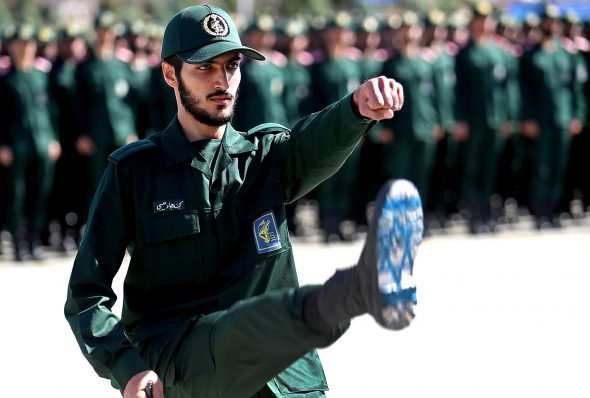 This week’s New York Times story “Terrorist Label for Iran Force” is, as the title suggests, about the U.S. decision to designate Iran’s Islamic Revolutionary Guard Corps as a terror organization.

The Times story is also about Israel. Reporters and editors made sure of that.

And considering the way those journalists shoehorned the Jewish state into the conversation — by suggesting that maybe Israeli intelligence should also be designated as a foreign terrorist group  — it is, most troublingly, a story about a newspaper that has lost any measure of self-restraint when it comes to the small, Jewish country that so often dominates its attention.

In three paragraphs, reporters Edward Wong and Eric Schmitt make a case that not only maligns Israel but also misrepresents the rationale given for the American terror designation; mischaracterizes the Revolutionary Guard; and conflates vastly different ways a country might use martial force:

Under a provision of the USA Patriot Act, low-level officials are empowered to deny entry to foreigners who are associated with an organization that the officials decide meet broad standards for terrorism — even when the United States government has not formally applied a terrorism label to that group.

Until now, American officials had never interpreted laws as permitting them to deem a government entity a terrorist organization.

The Trump administration’s decision to breach that constraint with the Iranian group raises the question of whether other government intelligence services that use violence — including those of Israel, Pakistan and Russia — also now meet that standard. If so, should American officials deny visas to people who work with those agencies? State Department officials say the rushed announcement meant such policy details have not been worked out.

It’s a mouthful, so let’s break it down. The first paragraph mentions “standards for terrorism” that the U.S. uses to deny visas to people associated with terror groups.

The second paragraph notes that the American government has for the first time formally applied those standards for terrorism to a “government entity.”

And the third paragraph is where the sleight of hand happens. The reporters downplay the Revolutionary Guard as merely an “intelligence service” that “uses violence.” (It’s much more than that.) They imply that “use of violence” is the American benchmark for defining terrorism and listing the Revolutionary Guard as a Foreign Terrorist Organization. (It isn’t.) They suggest that if the Revolutionary Guard is being punished for running afoul of those terror standards then Israeli intelligence might also be guilty of terrorism, and might also deserve to be sanctioned. (That’s anti-Israel incitement, not objective journalism.) And finally, they tell readers that the State Department hasn’t “worked out” whether that will happen. (No, the administration is clearly not weighing whether to sanction America’s longtime ally.)

These contorted paragraphs are a prime example of how the newspaper’s preoccupation with casting Israel in a negative light comes at the expense of a well-informed public. Straightforward coverage of the U.S. decision about the Revolutionary Guard would leave readers with a clear understanding of the American criteria for designating Foreign Terrorist Organizations, would forthrightly describe the U.S. justification for applying the designation to Iran, and would not mislead about the State Department’s policy direction. 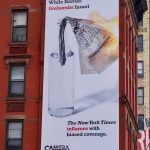 CAMERA’s billboard outside the New York Times building calls out the newspaper’s biased and inflammatory coverage.

What’s the actual criteria for designating a Foreign Terrorist Organization (FTO), if not use of violence by intelligence services? The Foundation for Defense of Democracies explains that

U.S. law defines “terrorism” as “premeditated, politically motivated violence perpetrated against noncombatant targets by subnational groups or clandestine agents.” To be designated as an FTO under U.S. law, a foreign organization must engage in terrorism or terrorist activities that “threatens the security of United States nationals or the national security of the United States.”

That’s easy enough. And easy enough for a Times reporter to research. The passages in quotes come directly from the US Code. Similar language appears on the State Department’s Foreign Terrorist Organizations web page, which notes that in order to be listed, an organization must engage in “terrorist activity or terrorism” and “must threaten the security of U.S. nationals or the national security … of the United States.”

That’s why use of violence by, for example, a French intelligence agency doesn’t put that agency at risk for being designated a Foreign Terrorist Organization. The U.S. didn’t view their use of force as terrorism, and doesn’t regard their ally’s actions as threatening American security. The same goes for Israeli intelligence — which works closely with American intelligence agencies.

The Revolutionary Guard is a different story. A Fact Sheet put out by the State Department, but seemingly ignored by the Times reporters, explains that the Revolutionary Guard is being listed because it has engaged in “terrorist activity or terrorism,” planned terror attacks against American allies and on American soil, and materially supported a “broad range of terrorist organizations.” 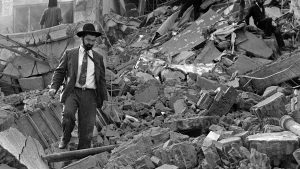 A Jewish man walks through the rubble of the Argentina’s AMIA Jewish center.

A statement from the White House said Iran “actively participates in, finances, and promotes terrorism as a tool of statecraft.” The American terror designation, the statement continued, “underscores the fact that Iran’s actions are fundamentally different from those of other governments.”

Did the Times reporters, who told their trusting readers that the designation of the Revolutionary Guard “raises questions” about whether other countries will be likewise sanctioned, not read this passage? Did they not take note when Secretary of State Mike Pompeo said the same thing during a press conference? Could they really be unaware of the difference, in the American view, between U.S. allies and adversaries?

Or do they understand these important components of the story but withhold them from readers for the sake of a jab at Israel?

Even putting aside from the State Department’s criteria for designating a terror organization, there is no excuse for the newspaper’s attempt to equate the Revolutionary Guard and Israeli intelligence. Last June, an Iranian diplomat was arrested for trying to bomb a rally of 4,000 Iranian dissidents near Paris, which was attended by U.S. officials. Earlier that year, German authorities broke up an Iranian intelligence-gathering operation that was reportedly surveilling Jewish kindergartens as possible targets. In 2013, Kenya sentenced two Revolutionary Guard operatives who scouted targets for a bombing attack, including a synagogue. In 2012, a Revolutionary Guard operative was arrested while surveilling a Bulgarian synagogue. In 1994, Iran bombed a Jewish community center in Argentina, killing 85 people.

The Times article sweeps such examples of terrorism under the rug, seemingly for the sake of denigrating Israel, but in doing so it also downplays anti-Jewish terrorism.