In the shadow of the coronavirus crisis confining populations across the world to their homes, governments have taken a number of steps that have impinged on individuals’ rights in an effort to contain the virus, prompting criticism charging unjustified, undemocratic power grabs. As CAMERA has previously reported, The New York Times, in particular, along with The Los Angeles Times, identify Israel as a prime example of a country where an “autocratic,” “authoritarian” leader allegedly engaged in an undemocratic “coup d’état,” or “coronavirus coup.” To substantiate the unfounded charge, media outlets have falsely claimed that Israel has shut down its courts.

Haaretz‘s English edition this weekend took this specious narrative to a new level, introducing an entirely false new charge: that Israel is limiting Internet use.  The May 9 column by contributor Eva Illouz, who holds the Rose Isaac Chair in Sociology at the Hebrew University of Jerusalem, and is also a senior research fellow at the Van Leer Institute, alleges (“Religion Can No Longer Claim Moral Superiority, and Six Other Lessons From the Coronavirus Crisis,” print edition, May 8, page 5)

Illiberal democracies like Israel, Poland, Turkey and Hungary handled the coronavirus crisis like a Reichstag-on-fire moment, as an opportunity to suspend civil liberties, close the parliament and the courts, and curtail free use of the internet. 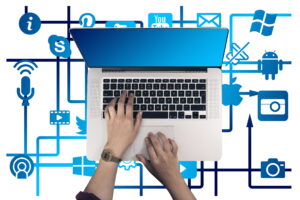 The Knesset, Israel’s parliament, has not been shut down, nor have courts – contrary to the false assertions in The New York Times and Los Angeles Times – though they have been forced to curtail their activity. Moreover, Israel has not curtailed citizens’ use of the Internet. The Israel Internet Association, a non-political non-profit organization responsible for managing .il domain names and the ongoing operation of the Israeli Internet eXchange, reported on March 23 that Israelis have increased their activity on local web sites during this crisis period:

Data compiled from the Israeli Internet eXchange (IIX), managed by ISOC-IL, indicates that Israeli internet traffic to local websites has increased by 25% in the past two weeks.

The Israeli Internet eXchange (IIX), connects all ISPs in Israel. Israeli ISPs are currently connecting to the IIX at rates of up to 100 gigabits per second. Estimating that the volume of online traffic will increase in the near future, ISOC-IL’s board, has accepted the recommendation of its CEO, to allow Israeli ISPs to increase their bandwidth connection to the IIX at no additional cost during the state of emergency announced amid the spread of Coronavirus.

Illiberal democracies like Israel, Poland, Turkey and Hungary dealt with the coronavirus crisis like the burning of the Reichstag in Germany 1933 — an opportunity to suspend civil rights and to ignore the authority of the parliament and the courts.

On a related matter, a page 3 article in Haaretz‘s Friday May 8 print edition, “Ohana keeps courts shut down for yet another week,” also falsely alleges that the courts are closed. The article errs:

Justice Minister Amit Ohana signed regulations Thursday extending emergency measures that shut down the country’s courts for another week.
The courts will reopen on May 17 to give the legal system time to prepare to return to normal activities, according to a statement from Ohana. Ohana froze the courts’ activities in March, but said urgent cases would still be heard. (Emphasis added.)

A nearly identical version of this erroneous report alleging that the courts are closed appears in an online news brief which states:

Justice Minister Amir Ohana has signed regulations extending emergency measures freezing the activity of the country’s courts for another week. The courts will reopen on May 17 to give the legal system time to prepare for a return to normal activity, according to a statement from Ohana. Ohana froze the courts’ activities in March, but said urgent cases would still be heard. (Haaretz)

While the emergency orders have curtailed some court activities, the courts have not been shut down, and thus references to the “closure of courts” or courts “reopening”  are inaccurate. On May 7, the Judicial Authority released an announcement about the expansion of activity which will begin on May 12 within the framework of the extension of the emergency decree until May 17.
In a March 21statement, Chief Justice Hayut made explicitly clear that the courts continue to function throughout the country, providing essential services to the public. Her statement emphasizes that the courts are not closed, and adds: “The reduced activity of the courts due to the coronavirus crisis until now – and everything necessary will be done in the future as well – to ensure that everything first and foremost will be carried out according to her opinions and decisions.” (CAMERA’s translation.)
It is worth adding that courts across the United States – a country which, according to Illouz, “showed how extreme its notion of freedom can be” – have either shut down or curtailed activities.
Latst month, CAMERA UK prompted correction at The Financial Times after the media outlet falsely report that Israel’s courts had been shut. The commendably Editor’s Note states:

An earlier version of this story stated incorrectly that Israel had shut down the courts in response to coronavirus. This has been corrected. Court activities have been curtailed but not suspended.

CAMERA has contacted Haaretz editors to request correction of the fallacious assertions that the Knesset and courts closed, and that Israel restricted Internet use. Stay tuned for an update.