CAMERA Arabic has prompted correction of a slideshow backgrounder by German public broadcaster Deutsche Welle, presenting Israeli history in Arabic. While the backgrounder, entitled “In Pictures – seventy years since Israel’s founding,” was originally published in April 2018, it was nevertheless embedded in some more recent Arabic articles, most recently on Dec. 9, 2019. 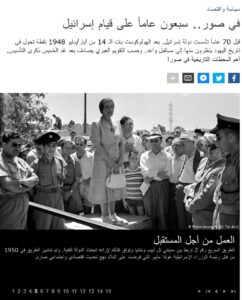 Slide 5, depicting the inauguration of Highway 2 between Tel Aviv and Netanya in 1950, had erred, stating:  “The road was inaugurated in 1950 by Israeli Prime Minister Golda Meir.” In fact, in 1950 Meir was Minister of Labor.

Slide 8, depicting the massacre of Israeli athletes during the Olympic Games of 1972, held in Munich, had erred:

In the Munich 1972 Olympic games, the Israeli swimmer Mark Spitz set seven world records. In the middle of the Olympics Palestinian terrorists broke into the Olympic village and took the Israeli athletes hostages. The German police’s attempt to rescue them concluded in a tragedy: the athletes were killed, including Mark Spitz.

In fact, Spitz is not Israeli, but rather Jewish American; he is also alive and well, having celebrated his 70th birthday last February. As for Spitz’s account of the Munich massacre: being the greatest Jewish athlete of his time, he was believed to be a target for the Palestinian terrorists who seized, and later murdered, eleven of his Israeli co-athletes; he was therefore wisked out of Germany immediately after the hostage crisis broke out. 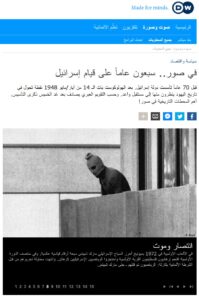 A screenshot of the slide which had misidentified Mark Spitzer

Following correspondence between Deutsche Welle and CAMERA Arabic, editors commendably corrected the two slides on April 27, in line with DW’s own network guidelines. The item now states that Golda Meir was Minister of Labor in 1950, and that Mark Spitz did not compete for Israel but rather the United States. His name is no longer included among those of the massacred Israeli athletes.