Reuters’ profile full of praise for Palestinian Prime Minister Mohammad Shtayyeh’s Covid-19 response misses a less flattering look: his demonization of Israeli soldiers, falsely accusing them of spitting on Palestinian vehicles.  According to an analysis by Ali Sawafta and Nidal al-Mughrabi Sawafta and Mughrabi, Shtayyeh “[is] spearheading,” or “has become the face of,” the Palestinian response to the virus due to his “prominence in tackling” it and the fact that he “has taken the podium each week to reassure Palestinians” (“Pandemic boosts Palestinian PM as potential Abbas successor,” May 6 in English and Arabic). Their glowing profile ignores the fact that the “face” of the Palestinian Authority’s coronavirus response has taken on a distinctly antisemitic hue. 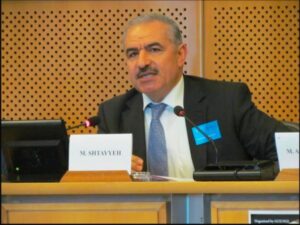 The two reporters also maintain that for Shtayyeh, “the urgency of the Palestinian Authority (PA) efforts to curb the virus have helped reinvigorate the domestic image of a body long viewed by some as corrupt and unproductive.” Based on the reported 96 percent support rate that Reuters cites for Shtayyeh’s health policies among West Bank Palestinians, this assessment appears to be correct.

The analysis, however, omits one crucial element about Shtayyeh’s response  to Covid-19 that, although unflattering, is important nonetheless: he falsely accused Israeli soldiers of attempting to spread the virus by spitting on car handles. Following a viral video of a single IDF soldier spitting on the ground as he was walking by a car in a Palestinian village, Shtayyeh issued the following statement on March 29: “We were exposed to testimonies that some of the (Israeli) soldiers are trying to spread the virus on car handles. This is racism and hatred on behalf of people who long for the death of the other. We will record this in the list of crimes.”

As CAMERA’s Ricki Hollander reported at the time, Shtayyeh was the most senior figure participating in a large-scale Palestinian libel campaign at the end of March. Using the soldier’s video as a launching point, additional Palestinian Authority and Fatah officials, including chief negotiator Saeb Erekat, Fatah spokesman Osama al-Qawasmi and PA spokesman Ibrahim Melhem, also took part in the anti-Israel incitement campaign.

According to Palestinian Media Watch, the official PA daily paper al-Hayat al-Jadida published at least three reports on March 30 suggesting that “dozens of occupation soldiers spit on cars of [Palestinian] residents and the door handles of the homes,” that others were “passing their hands over ATM machines,” or, alternatively, “attempting to approach our laborers and mingle with them in order to transfer the disease to them.” Similarly, Fatah’s official Facebook page claimed on March 29 that “Israel launched a biological war against Palestine.”

Fatah’s Arabic antisemitic libel campaign, echoing a centuries long tradition of associating Jews with the spread of diseases, was surely not intended for translation into English or Hebrew. Israeli journalist Yoni Ben-Menachem posited that his and other Israeli journalists’ part in translating and distributing the contents of the campaign outside the Palestinian territories was a main trigger for a subsequent Fatah video targeting them personally. Regardless of the fear of PA retribution, however, Reuters journalists Sawafta and al-Mughrabi have a journalistic responsibility to disclose that Shtayyeh’s demonization Israeli of soldiers, even as they cooperated closely with Palestinians, was an integral element of the prime minister’s Covid-19-related activity.

Notably, this is not the first time that Shtayyeh accused Israel of spreading disease among the Palestinians. Last September, he pledged to hold Israel legally accountable in international courts because it allegedly used West Bank sites as landfills for its nuclear waste, thus spreading cancer among innocent Palestinians. Like the Covid-19-related accusation, this story – a recycled decades–old Palestinian works of fiction to incite against Israel – was largely ignored by English-language mainstream media outlets, despite its clear antisemitic underpinnings and Shtayyeh’s high profile as prime minister.