In “Blood Libels, Conspiracy Theories and Coronaviruses” CAMERA discussed the history of the blood libel and how anti-Semites from across the spectrum have latched on to the coronavirus pandemic as a hook to hang their latest blood libels. As the pandemic continues, the libels have increased, as well. In Part II, we take a closer look at how Palestinian and BDS activists, in particular, have used the pandemic to libel and incite against Israel.

Anti-Semitic blood libels and conspiracy theories often incorporate irrelevant but true facts in order to create preposterous and defamatory accusations against Jews, which are seized upon and spread among the community, providing justification for even more Jew hatred. Medieval blood libels, for example, accused the Jews of brutalizing and murdering Christians in order to use their blood for the matzos required for Passover, incorporating true facts: Yes, Jews celebrate Passover and yes, Passover rituals include the eating of matzah (unleavened bread/crackers). But the only ingredients required for matzah are flour and water, not blood. In fact, the consumption of any type of blood is prohibited in Judaism, as is murder. Yet among the ignorant and credulous, this absurd fabrication continues to take hold.

Accusing Israel of Deliberately Infecting the Palestinians Population with Covid-19

It has been widely reported that the Covid-19 pandemic has resulted in unprecedented cooperation and coordination between Israel and the Palestinians. Israel has provided the Palestinian Authority with hundreds of testing kits and protective gear for healthcare workers, as well as workshops with Palestinian doctors and joint monitoring groups to discuss methods to contain the pandemic in the region. Even Nikolay Mladenov, UN Special Coordinator for the Middle East Peace Process, a group accused of “systemic anti-Israel bias”, has praised the excellent coordination and cooperation between the Israeli and Palestine authorities regarding the pandemic.

Yet despite this cooperation, anti-Israel incitement and libels continue. In fact, some of the same people who are coordinating with Israel about the pandemic are also using the coronavirus as a handy hook on which to pin their anti-Israel libels and incite the Palestinian populace against Israel.

Palestinian Prime Minister Mohammed Shtayyeh, for example, has acknowledged coordinating with Israel, establishing a joint medical committee to monitor and cooperate the response to the pandemic. But as Palestinian analyst Khaled Abu Toameh points out, Shtayyeh is hoping that the coronavirus crisis will boost his chance of becoming the next Palestinian Authority president and in order “to win the hearts and minds of his people, he needs to talk less about cooperation with Israel. The more he condemn Israel, the more he increases his chances of becoming the next Palestinian rais.”

No doubt that is why Shtayyeh put forth a new libel against Israel: On March 29th, the Palestinian prime minister proclaimed that IDF soldiers were deliberately trying to infect Palestinians with coronavirus. “This is racism and hatred of people who long for the death of the other,” he said. “We will record this in the list of crimes [against Israel].”

Based on a video clip showing a soldier spitting on the ground while on a patrol in Hebron, Shtayyeh exaggerated, supplemented and distorted the crude and juvenile action of one Israeli soldier into a full blown libel against Israel. Palestinian Media Watch documents how popular this libel has become. For example:

PLO Secretary-General Saeb Erekat echoed and broadened the libel by attributing the spreading of Covid-19 to Israeli settlers:

“…The settler gangs go wild, the latest example of which is… the spitting on Palestinian cars and property in order to transfer the corona disease to them… all of these are expressions of the spirit of hate taking root, the spread of the incitement to racism, and the wild desire to get rid of the Palestinian people in any way…” (Official PA daily Al-Hayat Al-Jadida, March 30, 2020)

And Fatah spokesman Osama Al Kawasami, accused both the IDF and settlers of conspiring to infect the Palestinians with Covid-19, claiming (based on the video of the single soldier) that

“cases have been documented in which the occupation soldiers and settlers were seen contaminating Palestinian property in many Palestinian areas in order to spread the virus among our people…which clearly proves the scope of the racism that is spreading in Israel.” (Official PA daily Al-Hayat Al-Jadida, March 30, 2020)

PA spokesman Ibrahim Melhem has reportedly spoken about his cooperation with the Israelis several times during press briefings . But that did not stop him from readily accepting and helping promote the libel against Israel, at least for the consumption of the Palestinian people. He is quoted in an article in the official PA daily as saying:

“It is not strange that the settlers and occupation soldiers are doing acts such as these [trying to infect Palestinian property], as they are striving for the epidemic’s spread in Palestine. In addition, they are attempting to approach our laborers and mingle with them in order to transfer the disease to them.”

A similar libel concerns Palestinian workers returning from Israel to their homes in the West Bank, although this was at the behest of PLO Prime Minister Mohammed Shtayyeh. In fact, Israel had given Palestinians workers the choice of remaining inside Israel for up to two months, and requiring their employers to arrange a place for them to live. It was the Palestinian prime minister who insisted that “all Palestinian laborers return to their homes” from Israel in order to “protect them and preserve their well-being.”  Still, Fatah and the PA latched onto this to create a new libel. Under the banner, “Israel launches a biological war against Palestine” Fatah, on its official Facebook page, accused Israel of using the returning Palestinian workers as carriers to infect the Palestinian population with Covid-19. They proclaimed:

“After its failure in preventing the spread of the virus – Israel the occupier strives to spread Corona in Palestine. It is opening all of the gates and fences throughout the two districts of Qalqilya and Tulkarem in order to ease the smuggling of Palestinian laborers who were infected inside Israel into their villages without passing through the [PA’s] emergency committees, medical inspections, and quarantine…[Israel] is now launching a biological war against us.”

An anchor on PA –TV News (March 29) echoed this libel, announcing that “The occupation authorities have opened the agricultural gates … to ease the entry and exit of the laborers – without medical supervision. This is in order to spread the Coronavirus among our people.”

“…The occupation forces have taken a new step: They have opened the iron gates and checkpoints in the racist annexation and expansion wall in the northern West Bank, in order to smuggle a number of Palestinian laborers into the 1948 territories (i.e., Israel)….This was in response to the call of the [PA] government, which asked them to return to their homes and families after the Corona epidemic has increasingly spread among Israelis … the Israeli occupation has raised its ugly head in an attempt to thwart all of the Palestinian efforts, steps of prevention, and precautions… which had surpassed the slow and irresponsible steps taken by the occupation government…”

For Palestinian leaders, the blood libel is a calibrated tool in their balancing act of portraying Israel as an evil, blood-thirsty villain while still depending on that same “villain” for help and succor in battling the pandemic.

Not so for BDS  leaders who have no need to calibrate their incitement and libels against Israel and the Jews. Take, for example, Cleveland-based BDS leader Abbas Hamideh, whose twitter feed obsessively heaps abuse upon what he calls “Zionists,” to mean Jews who support a Jewish state. Hamideh hooks his recent anti-Jewish libels to the coronavirus.

In one example, he attempts to be clever by using the neologism “zionavirus” to equate Zionism with the coronavirus pandemic.

In another, he uses the “greedy Jew” meme to suggest that “Zionists” are attempting to profit from the pandemic to the detriment of Americans. 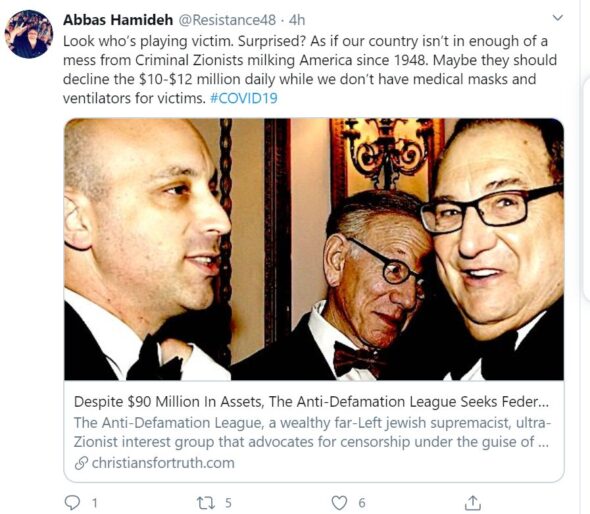 And in another he uses an outdated picture to falsely claim that Zionists alone, unlike the rest of the world, are spreading the virus by not heeding social distancing guidelines. 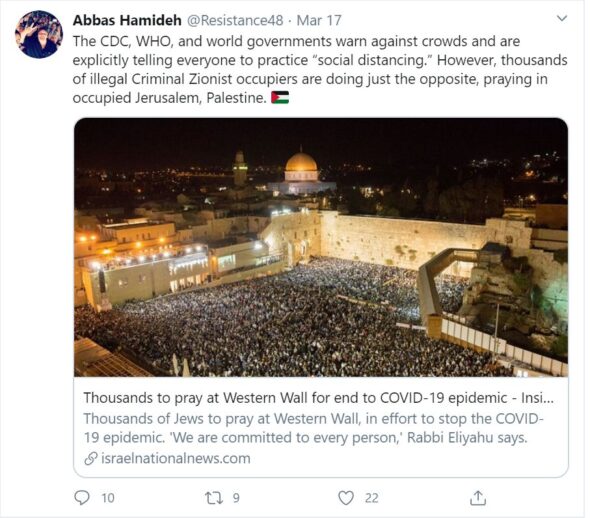 The picture and article he disingenuously tweets, however, date back to mid-February, more than a month before his tweet and long before social distancing became the norm. Hamideh adheres to the modus operandi of BDS activists who manipulate facts to fuel hatred of Jews and the Jewish state.

South African BDS leader Mohammed Desai used similar deceptiveness to accuse Israel of being an apartheid state. He falsely claimed that Israel’s Health Ministry deprives its Arab citizens of information and guidelines regarding Covid-19 in Arabic, thereby putting them at risk. His lie, however, was debunked by Yosef Haddad, himself an Israeli-Arab. (Watch below.)

Sarah Leah Whitson, notorious for her anti-Semitic, anti-Israel rhetoric and fabrications, recently indulged in a tweeted blood libel which she subsequently was forced to remove. From 2004-2019, Whitson directed the Middle East and North Africa Division of Human Rights Watch, an organization whose support for BDS has been documented, and she currently serves as managing director for research and policy at the Quincy Institute, a Soros-funded organization with a similar slew of anti-Israel activists and BDS supporters.  In response to a gleeful tweet by journalist Mairav Zonszein celebrating the fact that the pandemic would force Jewish Israelis to quarantine, Whitson tweeted, “Such a tiny taste. Missing a tablespoon of blood,” suggestive of a classic medieval blood libel. 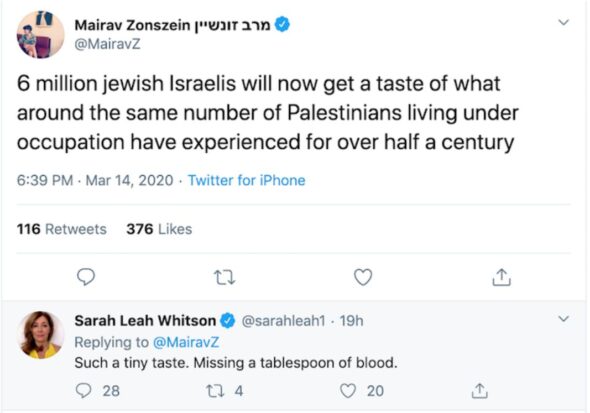 After much criticism on Twitter for the comment, Whitson deleted it, saying it “didn’t come out right so now gone to prevent misinterpretation.”

Blood libels are nurtured by hatred and weakened by exposure.   Palestinian leaders use them because they believe their route to power hinges on fueling hatred for Israel and Jews, no matter the circumstances, while BDS activists reveal the true nature of their vile, racist motives as they freely propagate anti-Semitic libels to fuel more hatred.  It is up to responsible and fair journalists to expose and condemn the blood libels and those who employ them.