In response to communication from CAMERA's BBC Watch, BBC corrected a report which wrongly reported that nearly 40 percent of Bnei Brak's population was believed to be infected. See here for details.

How many residents of the ultra-Orthodox town of Bnei Brak, a suburb of Tel Aviv, are believed to be infected with coronavirus? It's a big question as the densely populated town of 200,000, with its disproportionately high rate of infection, is currently under a police-enforced lockdown, with the military providing essential aid to the community in the days before Passover: distributing food, evacuating elderly and the sick, locating families who need additional assistance, and more. As of this writing, there are 1,214 confirmed coronavirus cases in Bnei Brak, versus 8,611 in all of Israel.

Bnei Brak's particularly alarming rate of infection in this town, along with that in other ultra-Orthodox communities, is reportedly due in part to the initial opposition of some religious leaders to government guidelines and orders concerning social distancing, including the closure of educational institutions and synagogues, the lack of smart phones and easy access to non-haredi (ultra-Orthodox) media, crowded conditions, and distrust in state institutions among some elements. 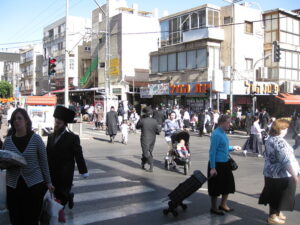 The extent of the infection in the town, which has grabbed local and international headlines in recent days, has implications for policy, resources, exit strategy and the outcome of the health crisis in Israel. When Dr. Ran Saar, the head of Maccabi, one of Israel's four large state-subsidized HMOs, told a Knesset committee last Thursday that based on several criteria, Maccabi researchers found that an astounding 75,000 residents, or 38 percent of the town's entire population, are likely infected with the virus, the world took note. The shocking figure made headlines in Israel and abroad.

Virtually none of the media outlets, however, which reported this alarming figure over the last few days informed readers that the Maccabi researchers who came up with the number reportedly rechecked their data alongside Health Ministry officials and uncovered a gross miscalculation, revealing that the actual figure may be one-tenth of what was originally reported.

The CEO of Maccabi health services, Ran Saar, said today (Thursday) that according to various indications, some 38 percent of B'nei Brak residents are sick with coronavirus – in other words, about 75,000 people. Until now, 900 have been diagnosed. Haaretz reported this week that approximately one-third of those tested in B'nei Brak were sick.

Nevertheless, a recheck carried by the Health Ministry together with the Maccabi officials who had built the model revealed an apparent miscalculation.  Thirty-five percent of the tests in Maccabi's testing station in the city did indeed come out positive, but most of those tested were those who showed early symptoms of the disease. Thus, the number of sick in the city extraordinarily exceeds the national average, but is very far from the number that Saar cited. It is likely that the actual number is one-tenth of the figure that was cited.

Dr. Ran Saar, who runs the Maccabi health maintenance organization, said according to his group’s projections the Tel Aviv suburb of 200,000 residents was harboring tens of thousands of hidden cases that had not been confirmed by testing and called for government action to prevent an even larger outbreak during the Passover holiday.

“Maccabi treats half of the residents of Bnei Brak, and according to various indicators, some 38% of Bnei Brak residents are sick,” Saar told the Knesset’s special coronavirus committee.

The claim would put the number of sick in Bnei Brak at around 75,000, much higher than the 900 confirmed cases there, according to official Health Ministry data.

The subheadline of the article read: "Head of Maccabi HMO tells Knesest panel 38% of ultra-Orthodox city is infected, amid worries residents are avoiding getting tested ahead of Passover."

In response to CAMERA's communication with editors yesterday, today the Times of Israel commendably amended the headline, subheadline and the text. The revised headline qualifies: "Health official seems to suggest 75,000 B'nei Brak residents may have coronavirus." (Emphasis added.) The amended subheadline casts further doubt on the 75,000 figure, stating: "However, remark by head of Maccabi HMO that 38% of ultra-Orthodox city is infected reported to be a calculation error; true number could be 10 times lower."

In addition, editors added the following critical information to the first paragraph:

However, the dramatic figure was later said to be the result of a calculation error, and Maccabi subsequently indicated it had no definitive statistics.

Bnei Brak has become widely known as the city where one in three people has coronavirus, but the medical experts behind the figure say it is based on a misunderstanding.

Ido Hadari, senior executive director at Maccabi Healthcare Services, told The Times of Israel on Sunday that his organization actually has “no idea” how many Bnei Brak residents have coronavirus, despite it having become the source for the figure that is being discussed across media and social media.

…Ran Saar, CEO of Maccabi, the HMO for one in two Bnei Brak residents, was widely quoted on Thursday telling a Knesset committee that 38 percent of people in the city are infected with coronavirus. But Hadari said that Saar wasn’t giving numbers for the general population of the ultra-Orthodox city, but rather discussing a very different statistic: what percentage of people there who felt unwell and went for a test in recent days actually had coronavirus.

All of the 1,300 people tested, Hadari stressed, had some coronavirus-like symptoms, and many had been referred by family doctors. Saar is “worried” by the situation in the city, and was trying to express this in general terms, but not trying to quantify infection levels, said Hadari.

Saar’s statistic came amid anger on the part of some Israelis toward ultra-Orthodox communities that were perceived as adopting social distancing rules too late, and therefore being culpable for their infections. Prime Minister Benjamin Netanyahu spoke out on Sunday about what he called the “wild incitement against the ultra-Orthodox public.”

Hadari said that his colleague’s analysis was misquoted by many to imply a negative view of Haredim. “It’s amazing that his words have been taken and turned against the Orthodox population,” said Hadari.

Meanwhile, media outlets which have continued to ignore the fact that Maccabi itself has disavowed the alleged 75,000 figure include major news outlets such as the Associated Press, Reuters, Agence France Presse, Los Angeles Times, NBC, The Jerusalem Post and United Press International.

Ran Saar, who runs the Maccabi Healthcare Services, a leading provider, told parliament he estimates some 75,000 people in Bnei Brak, or 38% of the population, could be infected.

Israel has confirmed at least 38 deaths linked to the coronavirus and over 7,000 infections - but medical experts estimate that as many as 38% of Bnei Brak’s 200,000 residents are infected.

Ran Saar, director of the health care organisation Maccabi, has said almost 40 percent of the population ofBnei Brakcould be infected by the novel coronavirus, equivalent to nearly75,000cases.

"According to various indicators, about 38 percent ofBnei Brakresidents are ill," Saar said Thursday before a parliamentary committee examining the government response to the pandemic.

CAMERA is in touch with editors who reported Saar's initial 75,000 figure but ignored Maccabi's recalculation and disavowal of media reports quoting their CEO. Stay tuned for updated.

This post was updated on April 13 to add that The Jerusalem Post and The Los Angeles Times also cited the high figure which Maccabi has disavowed.