Under the interim agreements signed in the 1990s between Israeli and Palestinian leaders known as the Oslo Accords, the Israeli government is obliged to allow Palestinian elections in East Jerusalem.

In fact, the Oslo Accords oblige Israel to allow voting for just a tiny minority of eligible Palestinians in eastern Jerusalem, a truly symbolic figure out of the reported 150,000 Palestinians eligible to vote. As the Associated Press accurately explained:

But the Palestinian Authority may need Israel’s permission for some 6,000 residents of the city to cast ballots. Israel considers all of Jerusalem to be its unified capital and bars the PA from operating in the city. It has yet to say whether it will allow voting in east Jerusalem but has signaled it will not agree to do so. . . .

The election commission says that, as with past elections, some 6,300 east Jerusalem residents would vote at post offices, which require Israeli permission to accept ballots. It says the rest of the roughly 150,000 eligible east Jerusalem voters could cast ballots on the outskirts of the city with or without Israel’s approval.

Israel’s Ministry of Foreign Affairs noted (“Main Points of the Israeli-Palestinian Interim Agreement on the West Bank and the Gaza Strip“):

Article VI of Annex II of the 1995 Interim Agreements states:

A number of Palestinians of Jerusalem will vote in the elections through services rendered in post offices in Jerusalem, in accordance with the capacity of such post offices. The relevant post offices for the purposes of these arrangements shall be:

Regarding Israel’s fulfillment, or lack thereof, of what Kingsley misleadingly described as Oslo Accords obligations “to allow Palestinian elections in East Jerusalem,” he wrote:

But Israel has neither blocked the election nor agreed to allow it. The Israeli government has not made a decision either way, an Israeli official confirmed, despite requests by the Palestinian leadership. The Israeli police have detained several representatives of Palestinian parties who attempted to campaign in the city.

What About Palestinian Obligations? 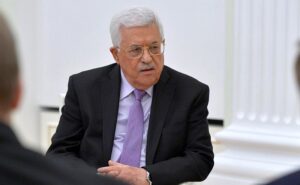 President Abbas: Changed the law, making elections for State of Palestine, in violation of Oslo Accords (Photo by www.kremlin.ru)

But the fact is Palestinians also have election-related obligations under the bilateral Oslo Accords. For instance,

(1) commit or advocate racism; or

(2) pursue the implementation of their aims by unlawful or nondemocratic means. [Article III, Annex II]

These Oslo obligations would rule out, for instance, candidates belonging to Hamas, a designated terror group which fires rockets at Israel and has an antisemitic charter.

The Palestinians’ election-related commitments also stipulate that the election is specifically for the Palestinian Authority. As Article I of Annex II states: “direct, free and general political elections will be held for the Council and, simultaneously, for the Ra’ees of the Executive Authority.”

But, as the Institute for National Security Studies explains, significantly, for the first time, the Palestinian elections that were slated to take place this month were for the State of Palestine, not for the Palestinian Authority, as required by the Oslo Accords. INSS wrote:

Israel, who some Palestinians hope will block the elections, will be unable to take responsibility for preventing them. It can block East Jerusalem residents from participating in them on the grounds that in violation of the Oslo Accords, these elections were defined in the presidential order announcing them as elections to institutions of the State of Palestine, rather than PA institutions, as stipulated in the interim arrangements, and as was the case in 2006.

To ensure a response to every possible development, Abbas, two days before issuing the election order, took two far-reaching steps. One is a reform in the legal system, namely, the establishment of an independent administrative court, which is subordinate directly to him. This ostensibly allows him to take a wide range of actions, including the dissolution of parliament, the postponement of elections, and even their abolition, as well as imposing restrictions on civil servants seeking election.The second step is a change in the law stating that this is no longer an election for the Palestinian Authority but for the State of Palestine, that is, for the President and the Legislative Council of the State of Palestine.It also repeals the stipulation in the 2007 law, after the Hamas victory in 2006, whereby every candidate in the election must accept the obligations assumed by the PLO. The first move angered Palestinian jurists and publicists because it harms the courts, and because of the many powers Abbas assumed for himself.The second, which in practical terms means the annulment of the Oslo Accords and the possibility of nominating organizations that do not recognize the PLO, oppose Israel’s policy, and deny Israel’s existence, did not evoke much reaction. (Emphasis added.)

As for Reuters, it expanded the Palestinian charge of Israeli obstructionism concerning elections in Jerusalem to include also the West Bank and Gaza Strip, where Israel has zero control. Thus, in their May 1 article, “Palestinian leader delays parliamentary and presidential elections, blaming Israel,” Nidal Al-Mughrabi, Ali Sawafta, and Rami Ayyub erroneously reported that Abbas blamed Israel for uncertainty regarding whether it would allow elections to proceed in the West Bank and Gaza, as well as in Jerusalem. The error appears in the passage in bold below:

He blamed Israel for uncertainty about whether it would allow the elections to proceed in East Jerusalem as well as in the occupied West Bank and Gaza.

“Facing this difficult situation, we decided to postpone,” Abbas said early Friday after an impassioned speech in which he declared: “Our people are excited for elections. There is enthusiasm… but what about Jerusalem? Where is Jerusalem?” (Emphasis added.)

The Reuters passage cites the Palestinian Authority WAFA news agency as its source on Abbas’ pronouncement. WAFAreports:  “President Mahmoud Abbas said today that the Israeli government has rejected the holding of the upcoming Palestinian national elections in occupied East Jerusalem . . . ” WAFA does not at all say that Abbas mentioned Israel prohibited elections also in the West Bank and Gaza.

CAMERA has contacted Reuters to request correction. In the meantime, Algemeiner, which had republished the Reuters story, commendably corrected its copy. The amended text now accurately states: “He blamed Israel for uncertainty about whether it would allow the elections to proceed in eastern Jerusalem.”

May 9 Update: Reuters Declines to Clarify

Reuters has declined to clarify its article, maintaining that the article referred to the fact elections were also going to be held “as well in the occupied West Bank and Gaza,” not that uncertainty existed over whether Israel will allow elections to take place in the West Bank and Gaza.