With Abbas' cancellation of elections on the pretext that Israel has not said it will permit voting in eastern Jerusalem, some reports mislead on Israel's Oslo-mandated responsibilities concerning Palestinian elections. As for Palestinian electoral responsibilities under Oslo, those simply aren't on the radar.
In an article noting the sense of freedom that the urban sport parkour brings to Gazans "locked in conflict with neighbouring Israel, which blockades the enclave," Reuters ignores the far more restrictive Egyptian blockade. While just over 25,000 people exited the territory via the Egyptian-controlled Rafah crossing this year, more than double exited via the Israeli-controlled Erez crossing.
In a report about 12 rockets fired at southern Israel from the Gaza Strip Aug. 21 overnight, Reuters neglects to mention that a home in Sderot was hit and suffered heavy damage. The article noted only that "buildings and vehicles" in Sderot were hit.
After Reuters misrepresented the Jewish city of Tel Aviv as an Arab city prior to 1948, editors improved the more problematic Arabic article but declined to clarify in English. Meanwhile, Ynet commendably corrected while The Jerusalem Post failed to do so.

Following The New York Times, Reuters is the second news outlet within 24 hours to correct the inaccuracy that Israel had imposed a 45-day ban on concrete imports into Gaza. The ban applied only to private deliveries; nearly 40,000 tons entered during that time.
A Reuters handbook tells reporters, and promises readers, that it will "take no side, tell all sides." But apparently this doesn't apply to Israel's side of a disputed shooting.
Raed Fattouh, a Palestinian Authority official, is selling the falsehood that certain products -- clothes, shoes, wood and aluminum -- are entering the Gaza Strip for the first time since 2007, and journalists are buying in bulk.
Update: Although it never corrected its report claiming Israel denied travel permits to 50 percent or more of sick Gazans, Reuters is now reporting that Israel admitted 81 percent of these patients last year. 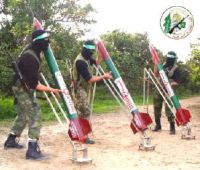 "We bless the (Jerusalem) operation. It will not be the last," Hamas said in a statement following the terrorist attack at Mercaz HaRav, a Jewish yeshiva in Western Jerusalem, as candy was handed out in celebration in the Gaza Strip. Just three days earlier, a Reuters headline on an article presenting Hamas terrorists as heroic warriors trumpeted, "Inspired by God, Hamas Fighters Battle On."
Donate Now