Buildings and vehicles in the southern Israeli city of Sderot were damaged, police said, and some Gaza commercial buildings and homes near the sites of Israeli air strikes on Hamas facilities were damaged. 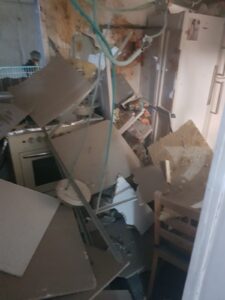 A man whose home in the southern city of Sderot suffered serious damage in a rocket attack from Gaza overnight said he believed he and his wife miraculously escaped after warning sirens failed to wake them.

“It’s a miracle [that we’re okay],” Shlomo Malka told Hebrew media outlets. “We did not hear the alert at all, we were awoken by the explosion.” . . .

“It cut the house in two. It hit the roof of the secure room,” he said, referring to the shelter within the house. “Suddenly we heard explosions and smelled smoke. We ran to the police station,” he told the Ynet news site. “It was only after we left [the house] that we saw the destruction.”

Pictures of the home showed the kitchen blown apart, windows smashed and large holes in the walls and roof. 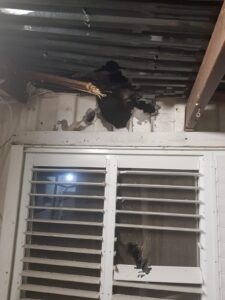 Both AFP and AP, among other news agencies, published photos of the heavily damaged home.
CAMERA has contacted Reuters to request that editors add in the key information that a home in Sderot was heavily damaged in the Aug. 21 rocket attacks. Stay tuned for an update.