In an article last week about refugees in the Gaza Strip yearning to return to their family homes which are located now in Israel, Reuters misrepresented Tel Aviv as an Arab city prior to 1948 (“Gaza fisherman clings to dream of return to Jaffa home“).  Nidal al-Mughrabi wrote:

Mahmoud Al-Assi comes often to this blue bench. It is one of more than 120 such brightly-coloured concrete seats that line the Gaza seafront, each marked with the name of a town or village in Palestine, before Israel’s creation in 1948.

They bear the Arabic names for Beersheba (Bir as-Saba’), Acre (Akka), and Tel Aviv (Tal ar-Rabeea’) – all towns that now lie in Israel.

Like many of Gaza’s 1.3 million refugees, Assi, 73, visits the coastal benches regularly, as an emotional link to the towns their families left behind or were forced to leave.

Unlike ‘Akka and Bir as-Saba’ – Arabic names for Acre and Beersheba respectively that were in use throughout the twentieth century – there was never a place called Tel ar-Rabeea’ before 1948. That term is merely the literal Arabic translation of the Hebrew name Tel Aviv. As the “first Hebrew city” in the era of Zionism, its Jewish inhabitants adopted its name as early as 1910 after Nahum Sokolov’s Hebrew translation of Theodor Herzl’s “Altneuland” (old new state in German), and “Tel Aviv” originally appeared in Ezekiel 3:15. The introduction of Tel al-Rabeea’ into the nomenclature of Palestinian place names, primarily in the context of Nakba commemoration and the demand for return, is a means to bolster the false claim that there was a Palestinian town by that name. It emerged in 2010 in both the West Bank and Gaza, and by 2017 it made its way into Palestinian schoolbooks.

This falsehood is also perpetuated in the Reuters report, where the Palestinian use of the “Tal ar-Rabeea’” phrase is recited uncritically and without further explanation. Thus, from the context in the article, it is clear that the benches commemorate the Palestinian exodus in 1948; why would any of them bear the name of a city that was entirely Jewish until 1948 if not to claim that it, too, was actually Arab?

Even Palestinian advocates of the so-called “right of return” have acknowledged that the very use of Tal ar-Rabeea’ is sufficient to suggest the existence of an Arab city or town that was never there. According to an editorial from 2012 by the Nazareth-based website “Arab 48” (translation by CAMERA Arabic):

The name implies that a Palestinian city or town by the name of “Tal ar-Rabeea'” [had existed] before the Nakba of 1948, and that now “Tel Aviv” stands on its ruins, like many Palestinian cities and towns whose population was made to emigrate, and whose original names were distorted and Hebraicized.

This use is mistaken despite being widespread, since there was no city or town called “Tal ar-Rabeea'” before 1948. […]

Today, “Tel Aviv” and its suburbs stand on the land of seven Palestinian villages whose population was made to emigrate in 1948 and were demolished and destroyed after that.

“Tel Aviv” is Jaffa and its villages, not “Tal ar-Rabeea’.” [Emphases added.]

These seats bear the Arabic names of cities like Bir as-Saba’, ‘Akka and Tal ar-Rabeea’, that became known as Tel Aviv, all of them now lie in Israel. [Emphasis added.]

While Reuters commendably amended the Arabic article, editors declined to correct the English version, maintaining that the English article did not characterize Tel Aviv as an Arab city or that the article reported Tel Aviv was called Tal ar-Rabeea’ before 1948. The improved Arabic article now states:

These benches bear Arab names for Be’er Sheva (Bir as-Saba’), ‘Akko (‘Akka) and Tel Aviv (Tal ar-Rabeea’) – all of them are cities that now lie in Israel. [CAMERA Arabic’s translation.] 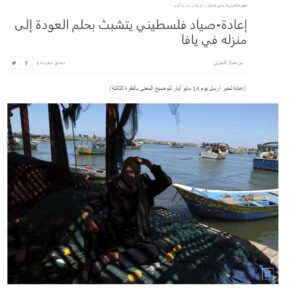 The revised version uses the Hebrew pronunciation for all of the cities. In addition, editors added a note to the top of the article alerting readers to the clarified language in the third paragraph. (Screen shot at left)
Two English-language Israeli media outlets had published the Reuters story which misleadingly depicted Tel Aviv as a Palestinian Arab city prior to 1948. While Ynet commendably corrected, The Jerusalem Post failed to do. Ynet’s corrected article (“Palestinian refugees still hope to return as they mark Nakba day“) no longer contains any reference to Tel Aviv. The article states:

Mahmoud Al-Assi comes often to this blue bench. It is one of more than 120 such brightly-coloured concrete seats that line the Gaza seafront, each marked with the name of a town or village in Palestine, before Israel’s creation in 1948.

Correction: The original version of this article erroneously stated that Tel Aviv was initially an Arab town named Tel ar-Rabeea’. Tel Aviv was founded in 1909 by Jewish inhabitants of pre-state Palestine.

CAMERA continues to call on The Jerusalem Post to follow Ynet’s commendable lead and set the record straight.