CBS today updated the article with newer international condemnation, and also makes modest changes in response to some of the concerns raised below. In the process, CBS managed to introduce a new blatant factual error.

On Nov. 13, CBS commendably corrected the false claim that the Oslo Accords "established the concepts that Area C in the West Bank would be transferred to Palestinian jurisdiction." See below for detailed updates.

Her article, one of the more flawed media items covering the demolition which was the subject of Nov. 5 report by the Israeli NGO B'Tselem ("With the eyes of the world on the US elections, Israel demolished an entire Palestinian community in the Jordan Valley") begins:

Israeli forces sent demolition vehicles last week to bulldoze a Palestinian village, leaving some 70 civilians, including 41 children, homeless, the United Nations said. It was part of the largest forced displacement carried out by the Israeli government in years, according to the U.N.'s Office for the Coordination of Humanitarian Affairs.

Falk, CBS' foreign affairs analyst based at the U.N. in New York and a faculty member at Hunter College's Department of Political Science, continued:

"Humanitarian agencies visited the community and recorded 76 demolished structures, more than in any other single demolition in the past decade, said Yvonne Helle, the Humanitarian Coordinator at the U.N. agency, adding that the destroyed properties included homes, bathrooms and solar panel arrays that were essential to the community. 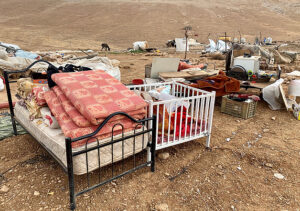 After the Nov. 3 demolition in Khirbet Humsa (Photo from U.N.'s report)

Nowhere does Falk mention that according to COGAT, the Israeli authority responsible for enforcement of building regulations in Area C of the West Bank which is under full Israeli control per the Oslo Accords, the demolition involved 15 structures — seven tents and eight pens — as opposed to the 76 structures cited by the U.N. Unlike CBS, other media outlets including Reuters and CNN did note the Civil Administration's information that seven tents and eight pens were demolished.

Moreover, Falk blatantly misrepresents the status of the Area C land where Khirbet Humsa, the Bedouin encampment in question, is located, stating: "The Bedouin and sheepherding village was one of several in the Palestinian territories built within designated Israeli army training areas, where building permits are rarely issued." (Emphasis added.)

But, as has been corrected by numerous media outlets in the past, it is wrong to label Area C "Palestinian territories," given that the Palestinian government has neither civilian nor security authority in this part of the West Bank. Among the media outlets which this year corrected erroneous references to Area C as "Palestinian territory" are The Wall Street Journal, The New York Times, Voice of America, and  Deutsche Presse-Agentur (DPA).

The U.N. and B'Tselem claim, echoed by CBS without challenge, that 70 Bedouin were left "homeless" by the act, ignores the fact that the Khirbet Humsa Bedouin, who had lived in tents prior to the demolition, promptly moved into new tents after the demolition. As Reuters reported Nov. 5, the same day as CBS' report: "By Thursday morning the residents had already moved back to the site, using tents donated by Palestinian aid groups, according to a Reuters witness." 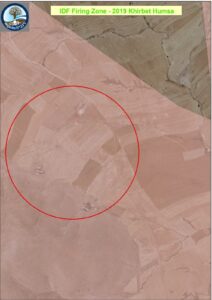 The claim that Khirbet Humsa encampment, a collection of a handful of European funded tents and pens on land used as an Israeli military training ground since 1972, constitutes a "village," is specious, at best. A 2019 aerial image of the site provided by Regavim, an Israeli NGO which opposes illegal Bedouin construction, casts doubt on that characterization. The 2019 photograph (at left) shows a largely barren land, with two tiny clusters of structures, built with funding from  European Union countries.

Footage from a 2016 B'Tselem video on Khirbet Humsa likewise shows extremely few structures, hardly enough to suggest a "village." Even the U.N.'s report refrains from referring to Khirbet Humsa as a "village" ("West Bank witnesses largest demolition in years"). Nor, contrary to Falk's report, does the U.N. allege that the entire community was demolished. B'Tselem, which has a history of false, agenda-driven reporting, does allege the demolition of "an entire Palestinian community." Agence France Presse also adopts the "village" terminology, alleging: "Israeli army destroys Palestinian village in Jordan Valley."

Falk grants Israel exactly one sentence to respond to the accusations about Khirbet Humsa, stating:

Israel's military unit in the West Bank said the destroyed structures were "built illegally in a firing zone in the Jordan Valley."

But Falk, like numerous other journalists, cast this information as merely an Israeli military claim. Falk, along with countless colleagues at other media outlets, ignore the fact that Israel's High Court has repeatedly ruled that the Bedouin had no ownership claims to that land that they occupied within the last decade which has served as a firing zone since the 1970s.

The land in question was declared a firing zone already in 1972. Furthermore, there is no dispute that the appellants do not have recognized property rights in these areas. Essentially, the case involves squatters using the land for shepherding purposes. It is undisputed that the IDF undertakes training exercises on these lands from time to time, and as a result during the training, the appellants, together with the residents, are requested to vacate the area not only for security reasons, but also for their personal safety. Moreover, building in the area is not authorized and not legal.

Indeed, that the site has regularly been used for military training, and residents have been required to temporarily vacate the area during these exercises, is consistent with a series of B'Tselem posts documenting the temporary evacuation (lasting for several hours at a time) of residents over recent years. Those B'Tselem updates dismiss the military training as "alleged" or a "pretext" for the evacuations.

National Public Radio's story on the demolitions reported that resident Yasser "Abu al-Kbash said the area is used for agriculture and is only rarely used by Israel for military exercises," a claim that holds up neither to the court's findings nor to B'Tselem's records indicating ongoing military use.

A 2011 High Court ruling referred to aerial photographs which the court said showed that the structures on the site appeared to indicate temporary, seasonal residences and not permanent full-time homes. 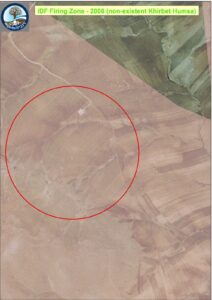 In an aerial photograph (at left, from Regavim) just three years prior to that ruling, even those apparently part-time structures cannot be seen. The photographic evidence, along with the court findings, indicate that 48-year-old shepherd Yasser Abu al-Kabash, Estrin's interviewee in the NPR article, could not have possibly been telling the truth when he "said he had lived there all his life."

CBS's false depiction of Israel's demolition of a handful of illegally tents and pens dangerously built in a long-established military firing zone as the destruction of an entire Palestinian village is one small step away from Congresswoman Ilhan Omar's vitriolic charge of a crime no less than "ethnic cleansing."

Today CBS updated the article with additional, newer international condemnation, and also made modest changes in response to the concerns detailed here.

The most significant change was acknowledging that Khirbet Humsa lies in Area C, which is under full Israeli control. As noted above, the article originally erroneously said the encampment is "in the Palestinian territories." The text added today follows:

The settlement is located within "Area C," an area designated under the international peace agreements known as the Oslo Accords, a landmark 1993 agreement between Israel and the Palestine Liberation Organization (PLO). The agreement established the framework for interim self-government for the Palestinians and reciprocal recognition between the Palestinian Authority and Israel. It was followed by the Oslo II Accords, which, in 1995 stipulated the withdrawal of Israel from particular cities and towns in the West Bank.

The Oslo Accords thus established the concept that Area C in the West Bank would be transferred to Palestinian jurisdiction.

But, as Richard Haass, the Council on Foreign Relations President, wrote recently, "the Oslo Accords were never implemented in full. [Israeli Prime Minister Yitzhak] Rabin was assassinated, subsequent attempts at negotiating peace failed, Arafat died, and no Palestinian state materialized." But the rough division of the "areas" remains.

The Khirbet Humsa homes that were demolished were located within an area that countries view differently, although few dispute that "Area C," and the Jordan Valley within it, is under Israeli security control, as laid out in the 1995 Oslo II Accords. (Emphasis added.)

The amended article now notes that according to COGAT, the Israeli authority responsible for building enforcement in Area C, the demolition involved seven tents and eight pens. CBS amended its erroneous description of the encampment from "village," to "small village," a negligible change.

The amended article still fails to make clear that, according to the U.N. report on which Falk relied so heavily, the entire encampment was not demolished, contrary to her reporting. More importantly, though the updated article added the unfounded allegation by European Union Representative Sven Kühn von Burgsdorff that the demolition is "contrary to international law," repeating the views of others already quoted in the piece, Falk still neglects to include the key information that Israel's High Court has repeatedly ruled that the residents have no property rights to the site which has been used as a firing zone since 1972, and that their relatively recent full-time residence in Khirbet Humsa is a danger to themselves.