For at least the seventh time in some 14 years, CAMERA has prompted a Los Angeles Times correction regarding inaccurate “Palestine” terminology. In the latest instance, a June 24 Sunday Calendar item about a German exhibit at the 2018 Venice Architecture Biennale  (“A wall? Please ask Berliners,” Carolina A. Miranda) referred to border walls around the world, include “Israel and Palestine.”

On at least half a dozen occasions, The Los Angeles Times has corrected references to Palestine relating to Israel, the West Bank or Gaza post 1948. 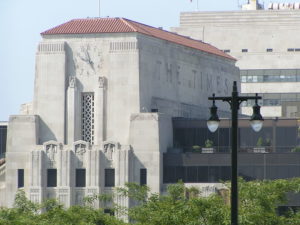 The most recent correction, from last June, also concerned a calendar item. The June 28 correction states:

CAMERA previously was responsible for the following Los Angeles Times corrections after the paper used the term “Palestine,” as opposed to “Palestinian Authority,” “West Bank” or “Palestinian territories”:

Gerald A. Larue: In the Sept. 22 LATExtra section, the obituary of USC religious scholar Gerald A. Larue referred to archaeological digs in Palestine. The digs occurred in Israel and the West Bank. (Sept. 22, 2014)

Carter speech: An article in Friday’s California section included a subhead saying former President Carter urged students to travel to Palestine. The area referred to is the Palestinian territories. (May 5, 2007)

Istanbul Biennial — An article in the Dec. 11 Calendar section about an international art exhibition included Palestine in a list of nations from which artists had contributed works. It should have said the Palestinian territories. (Dec. 23, 2005)

Bail bonds investigation–An article in the California section Sunday about the arrest of American Liberty Bail Bonds owner Adnan “Dan” Yousef and members of his family reported that they had ties to Palestine. The reference should have been to the Palestinians territories. (Sept. 29, 2004)

Palestinian film–Articles about Palm Springs International Film Festival that ran in Calendar on Dec. 20 and Jan. 8 referred to the movie ‘Divine Intervention’ as coming from Palestine. They should have said the Palestinian territories. (Jan. 13, 2004)

Following communication from CAMERA’s Jerusalem office, editors once again agreed to set the record straight, and published the following correction in the June 28 print edition:

German art exhibition: An article in the June 24 Arts & Books section about a German exhibition called “Unbuilding Walls” at the 2019 Venice (Italy) Architecture Biennale said it features video testimonials gathered by architects at border walls around the world, including Israel and Palestine. It should have said Palestinian territories.

The Times has yet to correct the digital version of the article, and CAMERA continues to call on editors to correct it as well.

Editors have commendably appended a correction to the digital article. 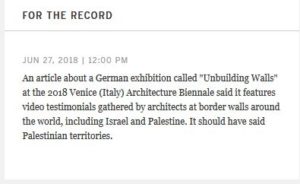