CAMERA’s Jerusalem office yesterday prompted correction of two Associated Press photo captions. The first was a Sept. 3 caption about a press conference with Palestinian Football Association head Jibril Rajoub. In the press conference, Rajoub pledged to appeal what he termed an “unjust and political decision,” FIFA’s imposition last month of a year-long ban of the Palestinian soccer official after he called on fans to burn Messi shirts and posters in protest of a planned match in Jerusalem.  Although the original AP caption was long, it completely omitted mention of the 12-month suspension, stating vaguely that Rajoub said “he would appeal a bevy of courts to complain about FIFA.” 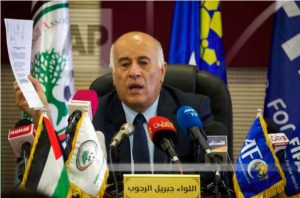 Head of the Palestinian Football Association Jibril Rajoub speaks during a press conference in the West Bank town of Ramallah, Monday, Sep, 3 2018. Rajoub said Monday he would appeal to a bevy of courts to complain about FIFA. He also threatened to sue Israel’s football association in the International Criminal Court. Rajoub’s threat is the latest jab in a quarrel between Israel, the Palestinians and FIFA over a friendly match between the Argentinian and Israeli teams that was to take place in Jerusalem earlier this year and then canceled by Argentina (AP Photo/Majdi Mohammed)

The purpose of Rajoub’s press conference was specifically to denounce the ban, put into place after he called on fans to burn Messi shirts in protest of the planned Jerusalem match, and to announce that he will appeal the ban. Therefore, the omission is inexplicable and unjustified. Agence France Presse, another leading wire service, reported (“Palestinian football chief calls ban for Messi comments ‘political,‘” Sept. 3):

The head of the Palestinian football association pledged to appeal Monday against FIFA’s 12-month ban for comments made about Lionel Messi, calling it an “unjust and political decision.”

FIFA last month banned Jibril Rajoub from attending matches for a year and fined him 20,000 Swiss francs ($20,600, 17,700 euros) for “inciting hatred and violence” after calling on fans to burn pictures and jerseys of Messi in the build-up to a friendly game with Israel.

Rajoub had demanded that Barcelona star Messi not take part in the pre-World Cup friendly against Israel scheduled for June 9 and called on fans to burn shirts bearing his name if he did.

The game was later cancelled after Argentina withdrew.

In his first press conference since the ban was announced, Rajoub denied wrongdoing.

“This is an unjust and political decision, an Israeli decision,” he said, pointing out the complaint came from the Israeli FA, not the Argentinians.

The AP caption’s opaque reference to the press conference as “the latest jab in a quarrel between Israel, the Palestinians and FIFA over a friendly match,” as if all sides were either equally culpable and/or equally justified, did nothing to elucidate Rajoub’s offense or FIFA sanctions.

AP editors agreed with CAMERA that the caption was lacking the key information about FIFA’s measures against Rajoub for “inciting hatred and violence,” and commendably corrected the caption to include the key point. The corrected caption details:

ADDS BACKGROUND ON RAJOUB’S SUSPENSION – Head of the Palestinian Football Association Jibril Rajoub speaks during a press conference in the West Bank town of Ramallah, Monday, Sep, 3 2018 .Rajoub threatened to sue the international sports body FIFA for sponsoring soccer in Jewish West Bank settlements. Fifa banned Rajoub from attending matches for one year for inciting “hatred and violence” after calling on fans to target the Argentine soccer association and burn jerseys and pictures of Lionel Messi over a friendly match against Israel that was to take place in Jerusalem. The match was canceled by Argentina. (AP Photo/Majdi Mohammed)

The second, unrelated caption about the first day of classes in an UNRWA school in Lebanon erred, stating that a “star of David and Palestine flag are seen painted on a classroom table.” First, it’s a five-pointed star, not the star of David. Second, the reference to “Palestine” flag is not consistent with AP style, which would require “Palestinian flag.” 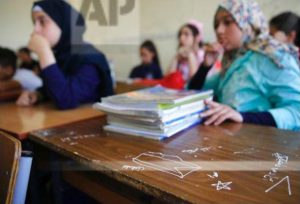 The star of David and Palestine flag are seen painted on a classroom table of Palestinian refugee students, during the first day of a new school year, at one of the UNRWA schools in Beirut, Lebanon, Monday, Sept. 3, 2018. The United Nations’ Palestinian relief agency celebrated the start of the school year in Lebanon on Monday, managing to open its schools on schedule despite a multi-million dollar budget cut on the heels of U.S. President Donald Trump’s decision to stop funding the agency. (AP Photo/Hussein Malla)

In response to communication from CAMERA, AP editors likewise issued a correction of this caption, removing the erroneous reference to the star of David and to the “Palestine flag.” The amended caption states: