The brother of Doctors Without Borders (MSF) gunman Hani Majdalawi (also spelled Almajdalawi), killed last month at the Gaza border after reportedly throwing a grenade at Israeli troops, appears to have given different stories depending on the language that his audience speaks. To English speakers, readers of The Los Angeles Times, Osama Majdalawi said that brother Hani “didn’t even know how to use a weapon” and that the peaceful man’s “only interest was his work, the happiness of his parents and the love of his wife.”

In contrast, an Arabic post which had appeared on Osama’s Facebook page, and which was since removed, said that Hani was a “martyr” who had “bought the weapon with his own money” and acted “completely independently.” The Arabic Facebook post was consistent with posts from other relatives and Palestinian social media sources. 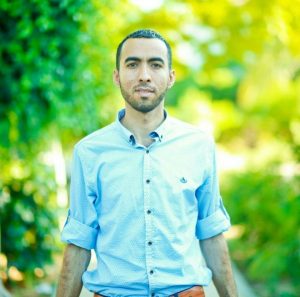 The portrait of a quiet, apolitical family man appears in Noga Tarnopolsky’s Aug. 26 article (“Aid worker is labeled a terrorist; Israel says Palestinian killed in shootout was a nurse with Doctors Without Borders“). After quoting a cousin who said Hani “did it for the sake of Allah” and had invited family for a sort of “farewell” gathering, Tarnopolsky reported:

But Osama Almajdalawi, the nurse’s 30-year-old brother, told a different story. Speaking with The Times on Saturday, he described Hani as “a beloved young man” so committed to his work the family barely saw him.

The family, Osama Almajdalawi said, was “surprised by his martyrdom . . . Monday morning he told us he was heading to the sea to buy fish and never came back. We all were surprised at 3 p.m. when we saw his picture all over social media, with stories saying he’d carried out an operation.”

Osama Almajdalawi has his doubts. His brother “didn’t even know how to use a weapon,” he said. He believes the Israeli military is keeping “things hidden” and expressed hope that the Red Cross would uncover “the real circumstances of the incident.” His brother, Osama Almajdalawi said, “didn’t express political opinions, and his only interest was his work, the happiness of his parents and the love of his wife.

Other media outlets, in contrast, reported on Osama’s Facebook post which said Hani bought the weapon. For instance, Reuters reported:

Responding to Israeli media reports on Majdalawi’s killing, his brother, Osama, described the married 28-year-old on Facebook as a “martyr” who had “bought the weapon with his own money” and acted “completely independently”.

The Facebook post said Hani Majdalawi had worked for Doctors Without Borders and that he had been “the most socially, psychologically and economically stable among his brothers”.

Osama himself is well aware of the contradictory nature of the two messages: one which said that Hani “bought the weapon with his own money” (Facebook, in Arabic), versus the second, in which he said Hani “didn’t even know how to use a weapon.” In a message that has appeared in Palestinian social media, the Majdalawi family wrote:

Clarification From the Family of Martyr Hani Majdalawi

We note that anonymous hackers broke into the Facebook pages belonging to the brothers of martyr Hani Oudeh Majdalawi and posted in our name. Therefore it is necessary to point out:

The martyr regularly goes to the sea at the break of dawn to buy fresh fish from the fishermen, and on the morning of his martyrdom he went like always to the sea and after that came a long and unusual absence when we lost touch with him until the afternoon. At three o’clock in the afternoon we saw the unidentified martyr’s picture on social media and the identification was made thanks to the photo’s publication. The martyr worked in the humanitarian field and we did not release any additional information, not even that he was vegetarian. The martyr works full-time until five in the evening, and we were not aware of any organizational affiliation. We did not notice any involvement in training or military activity, and as for what was published about the purchase of his weapon, we heard about that from the media. He did not leave behind any message or will which would indicate that he was up to something. In addition, his relationship with his family, neighbors, extended relatives and friends was exemplary. His familial, emotional and professional situations were the most stable. The only story that we have about his martyrdom is the one from the Israeli military which we cannot verify and which we do not trust. With the publication of this message, we, the Majdalawi family, demand:

1) to investigate how the martyr was killed and to publish the investigation in the media, as we do not have any idea and the only information that we have is what the Israeli side releases.

2) We demand that the institutions, groups and human rights centers act in order that we may receive the martyr’s body so that we can bury him.

The family of the martyr Hani Majdalawi

The hacking defense has been invoked before, often unsuccessfully, by high profile figures seeking to explain away their own unflattering or inconvenient social media posts. (See, for instance, Joy Reid, Anthony Weiner and Irina Rodnina.)

With research and translations by CAMERA’s Arabic department.