A Reuters article by Dan Williams and Stephanie van den Berg (“Israel hopes Germany, other ICC members will help stave off Palestinian investigation,” Feb. 16, 2020) concerned the opposition to an ICC investigation of politically motivated, Palestinian accusations against Israel.  But it falsely claimed that “The court’s chief prosecutor Fatou Bensouda said in December there was enough evidence for an investigation into thousands of killings…”

In fact, nowhere in the prosecutor’s December statement had there been any mention of “thousands of killings” or indeed of any “killings” at all.   The prosecutor had said in that that “there is a reasonable basis to proceed with an investigation into the situation in Palestine” and that she believes that “war crimes have been or are being committed”. She  neither quantified the “war crimes” she believes took place, nor said how many she believes were “killings”. (Watch  or read the statement by Fatou Bensouda.)

Nor was there any reference to “thousands of killings” in Bensouda’s court motion a month later, in January.  The only mention of any specified number of people killed in that longer document were the number of people who Palestinians claimed were killed in hostilities at the Gaza border — a number specified as “200 individuals” — far from the “thousands” claimed in the article.

In response to communication with CAMERA, Reuters issued the following correction:

This February 16 story changes “thousands of killings” to “reports of more than 200 killings and thousands of injuries” and changes December to January in paragraph 2.

(Reuters Arabic appended a similar correction to its Arabic-language article.) 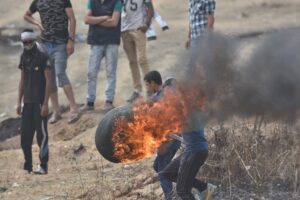 The news organization, however, fails to include the context of the claimed “200” killings, i.e. those killed during the Israeli military’s attempt to defend against  the so called “Great March of Return,” that began in March 2018. These riots were orchestrated by Hamas, Palestinian Islamic Jihad and other terrorist organizations.

At the urging of Hamas leaders, crowds of Palestinians aimed stones and firebombs at those protecting Israel’s border fence and lobbed incendiary kites across the border, setting  fire to Israeli fields and buildings— in an orchestrated attempt to “liberate” Palestine from the Jews, as Hamas leaders put it.    As MEMRI (Middle East Media Research Institute) has noted:

An examination of statements coming out of Gaza about the “Great Return March” campaign, by Hamas officials, by campaign organizers, and by participants and supporters of the campaign, reveal that it was not merely a popular civilian campaign but was fully supported by Hamas, and that its goal was to breach the border fence in order to penetrate Israeli territory and march on Israeli communities. Since it began, on Land Day (March 30, 2018), Hamas officials have paid visits to the camps along the border where the marchers congregate, to express their support and encouragement. Hamas officials noted that movement members had participated in the marches and that they comprised the majority of fatalities. Mahmoud Al-Zahar even emphasized that the march was not a form of peaceful resistance…

Indeed, an early analysis by the Meir Amit and Terrorism Information Center of the identities of those killed demonstrates that the vast majority of those killed were terrorist operatives or those affiliated with terrorist organizations.