The New York Times has taken a page out of the book of Palestinian President Mahmoud Abbas, who in recent days has made deceptive use of maps to paint a false narrative of diminishing Palestinian land along with Palestinian compromise. The paper of record, too, has also published grossly misleading maps which falsely suggest that under President Donald Trump’s “Peace to Prosperity” plan, Palestinians will end up with less land than what they now control when in fact the opposite is true. 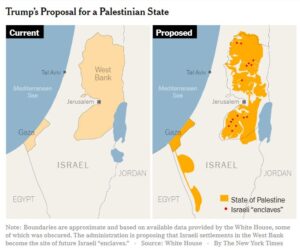 The title “Trump’s Proposal for a Palestinian State” sits above two maps. The map on the right shows the “Proposed” Palestinian state under Trump’s plan. The map on the left is labeled “Current” and shows the geographic territories of the West Bank and Gaza Strip, but gives no indication as to whom controls what in these territories.
The juxtaposition of these two mismatched maps (one which shows strictly geographic boundaries, but not political control, versus another which shows the delineations of the proposed Palestinian state) leaves the following false impressions: 1) Palestinians now control the Gaza Strip and West Bank in their entirety. 2) Under the Trump plan, Palestinians will controllessland than they currently do, when in fact the opposite is true. Indeed, Palestinians now control 40 percent of the West Bank (Areas A, under full Palestinian control, and B, which is under Palestinian civil control but Israeli security control). Under Trump’s plan, Palestinians will have control of some 70 percent of the West Bank, asThe Timeshasrepeatedlyreported. 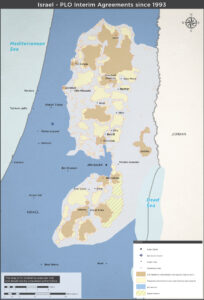 A juxtaposition which would accurately show the impact of Trump’s plan would be the plan’s proposed map (which currently appears on The Times graphic’s right side) next to a map which shows the areas that Palestinians now control. See, for instance, the map at left (screenshot at left, from Israel’s Ministry of Foreign Affairs) which shows parts of the West Bank controlled by Israel versus parts controlled by the Palestinians. The Palestinian controlled land appear in dark pink (Area A) and light pink (Area B). The Israeli-controlled West Bank land is in light blue.
CAMERA has brought the gross misrepresentation to the attention of Times editors. As of this writing, the paper has yet to revise its misleading graphic.