At an Arab League meeting in Cairo yesterday, Palestinian President Mahmoud Abbas displayed egregiously misleading propaganda maps of “historic Palestine,” falsely portraying all of what is now Israel under Palestinian control prior to 1947, with increasingly diminished Palestinian land over the decades. In actuality, a Palestinian government has never held control of any territory in the region until the Oslo Accords in the 1990s. Yet, the Agence France Presse captions of the map went along with the Palestinian leader’s completely ahistorical take of the maps, failing to give any context or frame the false, anti-Israel propaganda as just that.

An example of the series of yesterday’s AFP photos of the Abbas’ “The Palestinians Historic Compromise” maps and grossly misleading captions, which wholly adopt Abbas’ rewriting of history, follows: 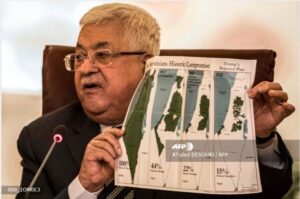 Palestinian president Mahmud Abbas holds a placard showing maps of (L to R) historical Palestine, the 1947 United Nations partition plan on Palestine, the 1948-1967 borders between the Palestinian territories and Israel, and a current map of the Palestinian territories without Israeli-annexed areas and settlements, as he attends an Arab League emergency meeting discussing the US-brokered proposal for a settlement of the Middle East conflict at the league headquarters in the Egyptian capital Cairo on February 1, 2020. Palestinian leader Mahmud Abbas announced on February 1 a cut of all ties with Israel and the United States, including security cooperation, days after Washington unveiled a controversial Middle East peace plan. Abbas spoke at an Arab League meeting in Cairo called after US President Donald Trump presented the plan, which is seen as staunchly favouring Israel, but offers Palestinians a pathway to a limited state. Khaled DESOUKI / AFP

The left-most map shows the land almost entirely colored green and labeled as “Palestine” as it supposedly existed in 1946. Moving from the left to the right, the maps depict the shrinking land allegedly belonging to Palestine, along with the creeping expansion of the white areas under Israeli control. As CAMERA’s Steven Stotsky explained at the time:

The green area is simply a rendering of the territory not under Israeli sovereignty. It does NOT demarcate land possessed by Arabs or by the mythical state of Palestine. In fact, the vast majority of the land (over 90 percent) had no legally recognized owner after the dissolution of the Ottoman empire in the wake of World War I. The disposition of the green areas remains to this day undetermined because the Arabs rejected the United Nations partition resolution in 1947 and because the Palestinians continue to reject any final agreement with Israel.

After NBC used these propaganda maps in 2015, accepting them at face value, the network was later compelled to retract. Correspondent Martin Fletcher commendably explained in the subsequent broadcast why the maps were wrong.

NBC’s commendable Oct. 19, 2015 correction how and why the maps are so misleading follows:

Kate Snow: Last Thursday in an attempt to talk about the context for the current turmoil in the Middle East we showed a series of maps of the changing geography in that region. We realized after we went off the air the maps were not factually accurate and we regret using them. To help clarify and provide perspective on the current situation we’re joined again by longtime NBC Middle East correspondent Martin Fletcher. He’s also author of Walking Israel: A Personal Search For the Soul of a Nation. Martin, you’ve been covering the Middle East for 40 years now.  Clearly those maps, that set of maps was wrong. Tell us why.

Well, Kate, first of all, I wish I said it right away when I saw them. The bottom line is that the first map showed the area as if it was a Palestinian state. The word across the map was Palestine. It was all, it looked as if it was all full of Arabs. And then the succeeding maps then showed fewer and fewer, less and less land all the time. Whereas bottom line was it was completely wrong. I mean, there was no state called Palestine. In 1946, it was a British mandate land. Britain was given control of the area by the League of Nations. And as a matter of fact, at that time roughly in that area, this is my estimate, there was about a half a million Jews living there and a million Arabs. So if anything the map should have reflected that demographic reality and it didn’t. And it gave the wrong impression. 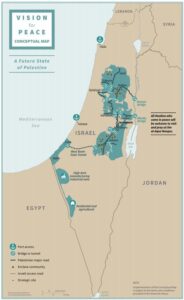 Furthermore, in yesterday’s maps seen in the AFP photographs, Abbas’ placard on “Trumps Projected Plan,” as the heading on the top right puts it, does not accurately reflect that plan. The 2020 map on the far right fails to mark in green the southern Israeli territory in the Negev desert along the Gaza Strip which the U.S. administration has indicated would be become part of a future State of Palestine. It likewise omits to note the passage (either a tunnel or an overland crossing) slated to connect the Gaza Strip to the Palestinian West Bank. 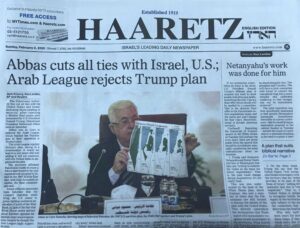 Haaretz‘s English edition which surely should be well versed in the history of Mandate Palestine, went along with AFP’s deceptive caption. The page-one caption accompanying the huge, prominent photograph at the top of today’s front page in English reads: “Abbas in Cairo Saturday showing maps of historical Palestine, the 1947 UN partition plan, the 1948-1967 borders and Trump’s plan.”

The caption in Haaretz‘s digital version was no better. It stated: “Mahmoud Abbas holds a placard showing maps of Palestine at an Arab League emergency meeting, Cairo.”

Haaretz‘s Hebrew edition did not give Abbas’ propaganda maps front-page coverage. In addition, the page four photograph in today’s Hebrew print edition was accompanied a caption, which, unlike the English edition, did not adopt Abbas’ false narrative. Instead, today’s Hebrew caption (print) reads: “Abbas in Cairo, yesterday. He said that the requirement to recognize Israel as a Jewish state is untenable, because Arabs and Russians live there.”

The Times of Israel, another English-language Israeli outlet, ran a caption for the AFP photo that was only marginally better than Haaretz‘s English caption, as the reference to “historic Palestine,” which uninformed readers would wrongly understand as referring to a Palestinian state in the past, is in scare quotes. The Times of Israel caption is:

Palestinian Authority President Mahmoud Abbas holds a placard showing maps of (L to R) “historical Palestine,” the 1947 United Nations partition plan on Palestine, the 1948-1967 borders between the West Bank and Gaza Strip and Israel, and a current map of the Palestinian-controlled territories without Israeli-controlled areas and settlements, during an Arab League emergency meeting discussing US President Donald Trump’s peace proposal, at the league headquarters in the Egyptian capital Cairo on February 1, 2020. (Khaled Desouki/AFP)