CAMERA’s Israel office last week prompted correction of a Voice of America headline which referred to the present day West Bank as “Palestine.” The Dec. 20 headline for a video had read: “Boutique Hotel at the Separation Wall Between Israel and Palestine.” The reference to the West Bank or the Palestinian territories as “Palestine” is not consistent with VOA style, and the media outlet has previously corrected this point. 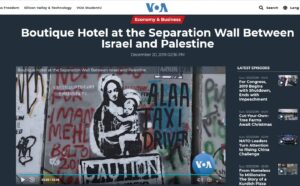 In response to communication from CAMERA, editors commendably amended the headline so it now accurately refers to “Israel and the West Bank.”

Unfortunately, however, the accompanying video, as noted in this CAMERA post last month, still does not give readers any indication at all as to why Israel build the separation barrier. Considering that the three-minute video, essentially a promotional piece for the Bethlehem “Walled Off” boutique hotel featuring the political satire art of Banksy, essentially focuses on the wall itself, viewers should receive even the most basic understanding of the “concept of the wall” — as tourist Gail Goodall put it.

Reporter Linda Gradstein cites Palestinian hotel manager Wisam Salsa: “Hotel manager Salsa says that both Banksy’s art and the wall’s graffiti are expressions of solidarity with Palestinian resistance to the occupation of the West Bank.”
In light of the fact that that what Salsa and Gradstein call “Palestinian resistance to the occupation of the West Bank” has included countless terror attacks resulting in the deaths of over 1000 Israelis, the context as to why the barrier was built should have been noted.
An earlier VOA article on the Walled Off hotel, prior to its opening, did indeed refer to “the west Bank separation barrier erected by Israel to ward off potential Palestinian attackers.” (Emphasis added.)
Donate Now