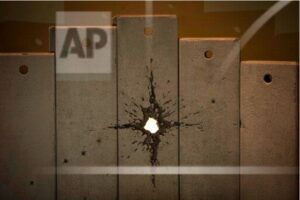 A major media event has hit the biblical town of Bethlehem, Jesus’ birthplace, just days before Christmas: The secretive artist Banksy has produced a new exhibit depicting the nativity scene with Israel’s concrete security barrier in the background, topped by a bullet hole in the shape of the iconic star characteristic of the manger.

Based on the media frenzy, one would assume that the political art was a towering mural, a dominant feature in the city, outside the boutique Walled Off hotel, perhaps appearing on the security barrier itself, which sits right next to the high-end lodging based around Banksy’s work. 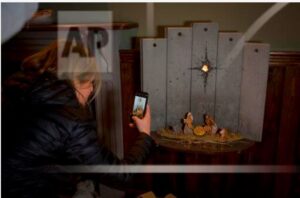 But far from being a huge mural which changes the face of the city itself, Banksy’s new piece is a small affair which sits atop a little end table inside the hotel. The diminutive size of the art installation, however, was apparently not a factor in the determination of news organizations to dedicate astounding amounts of high profile, high visibility coverage.

Editors considered the unveiling of “Scar of Bethlehem” so newsworthy that photographers used it as a hook for images of the hotel’s facade and the nearby security barrier; in other words, pictures which don’t even show the actual installation. Thus the accompanying caption for the image below states:

The Israeli security barrier stands near The Walled Off Hotel where a new artwork dubbed “scar of Bethlehem” by artist Banksy is displayed in the West Bank city of Bethlehem, Sunday, Dec. 22, 2019. (AP Photo/Majdi Mohammed) 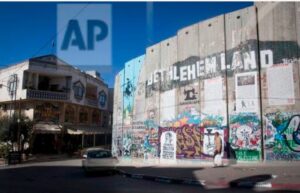 Has the opening of any other art exhibit – never mind a single small installation – ever garnered so must interest before in Israel or the West Bank, warranting headlines in numerous leading news organizations? None of the aforementioned media outlets which covered the opening of “Scar of Bethlehem” gave any coverage to the graffiti murals painted on Israeli bomb shelters by visiting international artists. According to Artists 4 Israel:

Artists 4 Israel’s team of international artists (over 1,000 participating artists representing 21 different countries) have painted over 800 murals across the world on everything from bomb shelters and orphanages to the middle of the most populous cities. These murals transform the grim reminders of war and terrorism into outdoor art galleries, beautify areas in need of renewal, add color to communities darkened by poverty and show that people in need are supported by Israel, artists and the creative communities of the world. 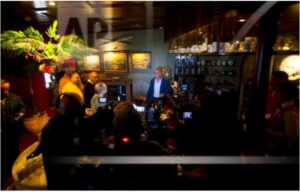 Wisam Salsa, general manager of the Walled Off hotel, speaks to journalists about a new artwork dubbed “Scar of Bethlehem” by the artist Banksy that is displayed in hotel, in the West Bank city of Bethlehem, Sunday, Dec. 22, 2019. (AP Photo/Majdi Mohammed)

Notably, Artists 4 Israel murals don’t trade in cheap anti-Israel propaganda in which Jesus and his family are depicted as Palestinians oppressed at the hands of the Israeli military, like the Banksy installation which places Jesus, Mary and Joseph at the foot of the bullet-scarred towering separation barrier. Falsely casting Jesus and his parents as Palestinian is standard Palestinian propaganda. As noted by CAMERA’s Tricia Miller, according to this formulation, “just as first century Jews persecuted Jesus, the Jewish State now persecutes Palestinians, the purported descendants of Jesus.” By giving the small installation such disproportionate coverage, journalists have provided an unfortunate platform to propagate the falsehoods.

Moreover, the suggestion that the Israeli military is firing on Jesus evokes ancient antisemitic charges of deicide. The widely-accepted International Holocaust Remembrance Alliance working definition of antisemitism includes the following:

Using the symbols and images associated with classic antisemitism (e.g., claims of Jews killing Jesus or blood libel) to characterize Israel or Israelis. 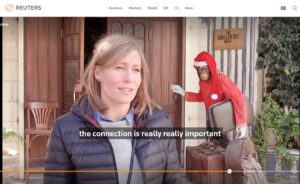 Instead of exploring and exposing the antisemitic canard behind the installation, or choosing not to give the vitriolic message a platform, media outlets uniformly provided warm, approving coverage. As one tourist interviewed in a Reuters video put it:

I think it’s totally true that the connection is really, really important and Banksy found exactly how to tell without words the reality.

According to the anti-Israel, antisemitic line of reasoning so warmly adopted in the approving media reports, the “connection” is that just as Jews oppressed and killed Jesus long ago, today they oppress and kill his descendants, the Palestinians.