In response to CAMERA's correspondence, editors amended the online article so that it no longer refers to "Palestinian homes" in Bethlehem during the days of Joseph and Mary. The corrected text refers to "Homes in that area."

Following The Union-Tribune correction, The Los Angeles Times also sets the record straight. The commendable print edition correction today states: "Nativity scenes: In the Dec. 26 California section, an article about the details of the Nativity referred to Palestinian homes. The homes would have been Judean."

In a Christmas Day article featuring a New Testament professor who debunks myths surrounding the Christmas Nativity scene, The San Diego Union-Tribune introduces a myth of its own, falsely casting Jesus' relatives as Palestinian ("Is first Noel a merry Christmyth?") Peter Rowe's article opens by setting the myth-busting scene: 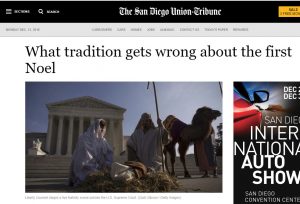 You know the story.

Informed there was no room in the inn, Joseph and Mary took shelter in a stable.

In this humble setting, surrounded by oxen, sheep and other animals, the infant Jesus was born and placed in a bed of straw. His birth was hailed by a worshipful crowd that included three kings, bearing gifts of gold, frankincense and myrrh.

Mark Strauss, New Testament professor at Bethel Seminary in San Diego, has seen many Christmas Nativity scenes with these features.

They are, he insists, Christmyths.

In St. Luke's Gospel, Mary and Joseph travel from Nazareth to Bethlehem during her pregnancy. Bethlehem was a tiny village, Strauss said, too small to support an inn. The couple probably stopped at the house of a relative, or a relative's friend.

The homes of Mary and Joseph's relatives, or relatives' friends, were not "Palestinian." They were Judean. During the time of Joseph and Mary, the region in which Bethlehem is located was known, including by its inhabitants, as Judaea (per the Latin spelling) and not Palestine.

As The New York Times noted in a June 20, 2008 correction, Romans renamed the region "Palaestina" some 100 years after Jesus died:

The Malula Journal article on April 22, about efforts in the village of Malula, Syria, and two neighboring villages to preserve Aramaic, the language spoken by Jesus, referred incorrectly to the name of the region where Jesus spent most of his time. It was Galilee — not Palestine, which derives from the word Palestina, the name that Roman conquerors gave to the region more than 100 years after Jesus’s death. The error was pointed out by a reader in an e-mail message on Monday.

The Los Angeles Times has likewise previously published a correction on the identical point. The Times' Sept. 28, 2011 correction states:

“Ben-Hur”: A Sept. 26 Calendar section article about a new DVD and Blu-ray release of the 1959 film “Ben-Hur” described the title character, played by Charlton Heston, as a Palestinian nobleman. The character Ben-Hur was a Jew from Judea who lived long before the place now known as Palestine was given that name.

Incidentally, The Los Angeles Times itself republished The San Diego Union-Tribune story ("Is first Noel a merry Christmyth?; All details in Nativity may not be biblically true, but scene has value, scholar says," Dec. 26, page B6). CAMERA has contacted both publications to request corrections. Stay tuned for an updat