In the last couple of days, CAMERA’s Israel office has prompted a wave of corrections regarding the eviction earlier this month of the Shamasneh family from their Sheikh Jarrah home in eastern Jerusalem. Multiple media outlets reported as fact that the family had inhabited the home since 1964, ignoring that Israeli courts findings that patriarch Ayoub Shamasneh was unable to prove residency prior to 1968. That year is critical given that in order for east Jerusalem Arabs to receive “protected tenant” status, they must be able to demonstrate that they signed a lease prior with Jordanian authorities and inhabited the dwelling prior to August 20, 1968.
Following communication from CAMERA, Times of Israel, Haaretz, and The Jerusalem Post all corrected. Correction requests are still pending at Agence France Presse, Al Jazeera and United Press International. In response to correspondence from CAMERA’s UK Media Watch, The Times (of London) added information about the Israeli court finding, but left untouched the headline and sentences in the story which stated as fact that the family lived in the house since 1964 (“Court orders Palestinian family out of home after 53 years“).
As reported by Presspectiva, CAMERA’s Hebrew web site, the court ruled that Ayoub Shamasneh, the father, was unable to prove that he lived in the home in 1964. He claimed he lost his rental documents and he did not produce the documents from the tenant who preceded him. Shamasneh did not call any neighbors as witnesses to testify on his behalf, nor did he call the daughter of the previous tenant, whose address he knew. He did not even call his wife or son to testify.
The relevant papers that Ayoub Shamsneh did produce included a 1972 arnona (city tax) document, a 1969 certificate from the electric company, a water document from 1974, and a 1965 work identity document, which only listed his neighborhood (Sheikh Jarrah), but no specific address. In short, none of Shamasneh’s evidence demonstrated that he had lived in that home prior to 1968. To the contrary, his own evidence pointed to residency only post-1968 (in other words, less than 50 years).
According to i24 News:

The courts ruled that the Shamasne family has lived in the house since 1972, however the family claims it has been resident since 1964 (albeit without a lease for part of the period) and that therefore they cannot be evicted under law.

As previously reported, Times of Israel, the first media outlet to correct, amended both the headline and text, removing the claim that the family had resided in the home for 53 years and adding the important information that “[t]he court determined that the Shamasnehs were unable to prove residency prior to 1968.”
The Israeli daily Haaretz had also reported as fact a Palestinian family’s claim which did not hold up in court. The Sept. 5 article (“Israel evicts Palestinian family from East Jerusalem home to make way for pre-48 Jewish owners“) had stated: “The family had lived on the land since 1964.”
In addition, the subheadline also stated as fact that the family lived in the Sheikh Jarrah home since 1968: “In first such eviction since 2009, eight members of Shamasneh family were kicked out of their Sheikh Jarrah property, where they have lived since 1964.”

In response to communication from CAMERA, Haaretz yesterday commendably corrected, amending both the subheadline and article, and adding the court’s findings. The amended subheadline no longer refers to the family residing in the property since 1964.
In addition, editors revised the text to reflect the fact that the family claim of residency since 1964 was just that, a claim: “The family claims it has lived on the land since 1964.” (Emphasis added.)

In 2013, the Shamasneh family lost their appeal in the case in the Supreme Court, after the lower courts also ruled that the family didn’t prove residency in the house before 1968, and thus they were not eligible for protected tenant status.

To its credit, Haaretz made the changes and additions in its Hebrew language coverage as well.
The Jerusalem Post was the third English-language media outlet to misreport, and then subsequently correct, regarding the Shamasneh’s residency in the house (“Palestinian Family Evicted from East Jerusalem Home After Legal Battle“).
Initially, the first sentence had stated as fact that the family lived there for “more than 50 years.”
The new accurate wording states: “they say they had lived there for more than 50 years.”
In addition, the article originally stated: “The Shamasneh family has lived in the Sheikh Jarrah home since 1964.” The amended text now states:

The Shamasnehs say they have lived in the Sheikh Jarrah home since 1964, but the Jerusalem Magistrate’s Court ruling found that the family had failed to provide necessary documentation to prove residency for that long a period, which may have entitled them to tenancy protection under the law.

The Jerusalem Post wishes to clarify that the Shamasneh family, written about in “East Jerusalem Arab family removed from home” (September 6) says it lived in the Sheikh Jarrah home since 1964. The Jerusalem Magistrate’s Court, however, found that the family had failed to provide the necessary documentation to prove residency for that long a period, something that might have entitled it to tenancy protection under the law.

Oct. 16 Update: UPI Corrects Headline, Caption, Article
Earlier this month, UPI has commendably corrected the headline, article and photo caption about the Shamasneh family in response to correspondence from CAMERA. The headline originally alleged: “Palestinian family evicted from East Jerusalem home of 53 years.” In addition, the original photo caption also stated as fact that the family lived in the home for 53 years: “Palestinian Ayoub Shamsaneh [sic] (L), 84, sits with his son, Mohammad (C) on the street outside their home of 53 years, after his family’s eviction on Tuesday in East Jerusalem.” 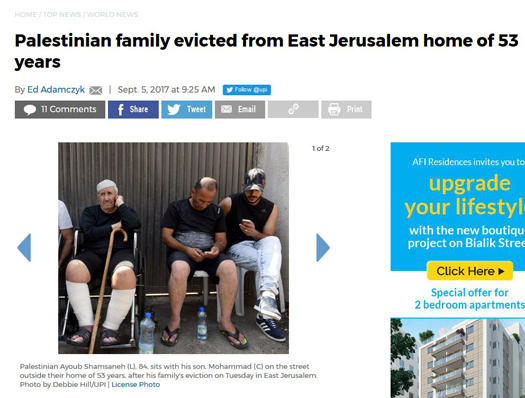 The amended headline now accurately states: “Palestinian family evicted from East Jerusalem home after long court fight.” In addition, the corrected caption reads: “Palestinian Ayoub Shamsaneh [sic] (L), sits with his son, Mohammad (C) on the street outside a home they had lived in for decades following their eviction on Tuesday in East Jerusalem.”
Moreover, the article originally opened by presenting the family’s unfounded residency claim as fact: “A Palestinian family was evicted Tuesday from the East Jerusalem house where they have lived for 53 years, the first such eviction in eight years.” In contrast, the revised article treats the family’s claim as a claim, stating: “A Palestinian family was evicted Tuesday from an East Jerusalem house where they claimed to have lived for 53 years, the first such removal in eight years.” Furthermore, editors added the following key information to the amended article:
The high court and lower courts ruled that the Shamasneh family failed to prove they had lived in the home before 1968, which could have given them protected tenant status.
At the time of its ruling, the Israeli Supreme Court deferred eviction of the Shamasneh family on humanitarian grounds. The family was ultimately served with an eviction, however, when the legal challenge was renewed recently, Haaretz reported.
Donate Now