If there was any doubt that lies told about the modern state of Israel incite violence against American Jews, it was demolished after the recent appearance of professional Jew-baiter E. Michael Jones on the YouTube channel of Catholics Against Militarism (CAM).

During the interview, Jones, a failed academic who bills himself as being at the “absolute dead center of Catholic tradition,” argued that the deaths of civilians at the “March of Return” riots organized by Hamas logically justifies the murder of Jews in synagogues in the United States. Instead of confronting Jones’s statement for what it was — a naked affirmation of hostility toward Jews in the United States — CAM’s Ellen Finnigan, a writer who graduated from Boston College, responded in numb agreement, saying, “Yeah. Yeah. That makes sense.” 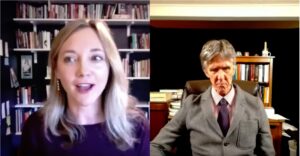 The exchange is on full display in an interview posted on CAM’s YouTube Channel on May 14, 2019. During the interview, Jones takes full advantage of Finnigan’s profound ignorance about the history of antisemitism, the Catholic church’s response to the Holocaust, Jewish opposition to the Iraq war, and the Arab-Israeli conflict. Without challenge, Jones blames, Jews for nearly every aspect of American life and modernity itself that he does not like.

He also blamed Israel for the Iraq war even though numerous Israeli security officials warned against an invasion, declaring that Iran was more of a threat and that there was no unified opposition to Iraqi President Saddam Hussein. The criticism became so loud in 2002 that Israel’s Prime Minister Ariel Sharon told his cabinet to keep quiet about the issue.

Prior to the invasion, David Harris, executive director of the American Jewish Committee, warned, “If the war doesn’t go well, there will be those who will try to peddle the time worn theory that we have to look for a scapegoat and Jews have provided a scapegoat for bigots for centuries.”

Harris’s statement proved to be prescient, because it describes Jones’s behavior perfectly. During the interview, he told Finnigan, that he was “furious at the duplicity and mendacity” that led to the war and that this anger “propelled [him] to write The Jewish Revolutionary Spirit.” This book, Jones’s magnum opus, blames Jews for every aspect of modernity and public life in America that he objects to: gay rights, abortion, rock and roll, and even the success of the civil rights movement in the American South.

For Jones, modernity is a Jewish racket.

Jones’s affirmation that it is legitimate to shoot Jews in America because of Israeli policies in the Holy Land comes at about 37 minutes into the 58-minute video after he declares that if Israel cannot get along with its neighbors, it’s not his problem. This prompts Finnigan to chuckle cynically before Jones declares that Israeli snipers killed Palestinians in cold blood during the “March of Return” protests at the border. Jones states that he saw photographic proof of such killings while he was being interviewed by Henrik Palmgren a few days before. Palmgren is YouTuber who promotes white supremacism, the notion of white genocide, and nasty antisemitic propaganda about the evils of the Talmud. (For some reason, Finnigan, the host of a YouTube show that promotes pacifism, did not see fit to challenge Jones about his appearance on Palmgren’s show.

With its response to the March of Return protests, Jones says, Israel is teaching the world to murder. “You’re teaching bloody instructions,” he says, while pointing his finger. “So if you do that, don’t be surprised if somebody picks up a gun in Poway, California, or in Pittsburgh, and guns down people in a synagogue.”

“You’re preaching that violence is the solution to any problem,” he says. “And if you’re justified in doing that to Palestinians, why is this guy [John Earnest] not justified in doing it to Jews? Tell me that. Explain that to me.”

Does Finnigan really think it makes sense to shoot American Jews because of things Israeli soldiers are falsely accused of doing? Does she have any idea how this logic can be applied to other tragedies where civilians are massacred by groups like ISIS?

Is this the type of logic that a Catholic peace organization should affirm?

What is going on at Catholics Against Militarism? Why is it promoting vicious antisemitism on its YouTube channel?

Is demonizing Jews truly the path to peace?